Here's Robert! One second later, he shot out of that hole like a bullet!
I would have called him 'Bob,' but he was dressed so formally in black and white, Robert seemed more appropriate.
This is what we saw upon first inspection of the hole. A new kind of 'behind shot.' Shake them tail feathers!

Here's an action shot. You can see the wood chips he is flinging out on the left side.

The female Downy Woodpecker doesn't have the red spot on the back of her head. I think the male has the red mark because of the 'hen-pecking' of the female!

We opened up the Bird Mobile this past weekend, that will be a story unto itself one day. It's located about three minutes from Magee Marsh and Black Swamp Bird Observatory, our two favorite places to be! After all of our chores were finished, we decided to go out and see a few of our birdie buddies with our human friend, neighbor and primo birder, Judy. 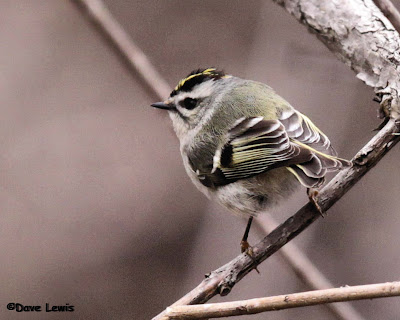 I did get a few shots of the 'proper' end of this Golden-crowned Kinglet, but what fun would those be?

We walked the boardwalk at Crane Creek and saw a good number of birds about, Ruby and Golden-crowned Kinglet, Dark-eyed Junco, Hermit Thrush, American Robin, Yellow-bellied Sapsucker and flyovers by Canada Geese, Bald Eagles and a number of ducks.

It started to rain, and you know cameras (and Dave) don't really care for getting wet, so we started to beat feet out of there and head for drier climes.

It's hard to ID a Hermit Thrush from behind!

On our way out we saw a young lad and his father looking at a dead and rotting tree. The boy said he could see a woodpecker moving inside the hole. We had to stop for that! How often do you get to watch a Downy Woodpecker carving out his nest? What a busy Downy he was. I took a few dozen pics, and a couple were satisfactory enough to post above. 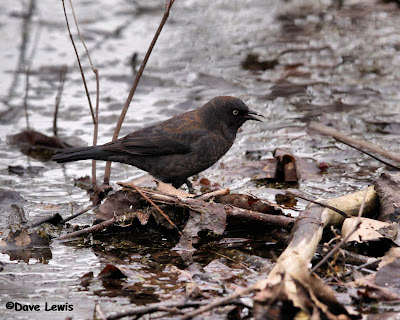 This Rusty Blackbird was asking for WD40, I didn't have any. 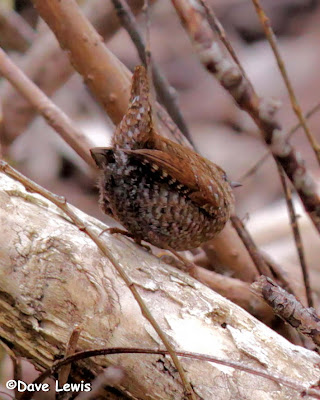 Last, BUTT not least...well actually, least is an appropriate term for this tiny Winter Wren!

There were a good number of Downy's in the area and I think Robert has one of the best nest sites! I'll keep you updated as we visit him on the weekends.