The Master of the Skies 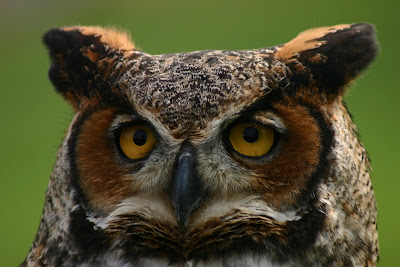 This gorgeous specimen is from Back to the Wild rescue and rehab center.
Yes, the Great Horned Owl. The Tiger of the Sky. A master of flight, silent, swift, deadly. Capable of swooping in, unheard and unseen to catch prey in one powerful , but incredibly quiet move.
Except for the first time out of the nest. The goofball of the skies. Loud, clumsy and ungraceful. Landing, what's that? At this point in an Owl's career of deadly flight, landing is, obviously, the last thing learned and the hardest thing to master. At least judging from this graceful and acrobatic youth.
The look on his face says it all, "I think I did something wrong."
We were at Ottawa National Wildlife Refuge, getting ready for a little picnic snack. Out of the corner of my eye, I saw something large and raptor-like coming out of the woods and hit a tree. By the time I got my camera and Doodles her binos, whatever it was, was flapping wildly and apparently caught in a few limbs. As we got a little closer, as close as was possible, we realized it was a fledgling Great Horned Owl on its maiden voyage. It was not a happy camper. He managed to land upside down and he was hanging at first by one leg. Yep, the Goofball of the Skies! Eventually he got hold of the limb with both legs, after another five or ten minutes of wild flapping.
He's looking around to make sure no one saw him.
He took a little rest and then just let go, dropped into the clearing and took off back home to tell his folks of his daring first flight. I'm sure, like any kid on his first time out alone, he'll tell them how great and impressive he was.
We know better.

Free at last! He's running home to safety...being chased by a Tree Swallow. Who's the brave boy?

This is the proper way to perch in a tree. He was at Sandy Ridge Reservation earlier this year. 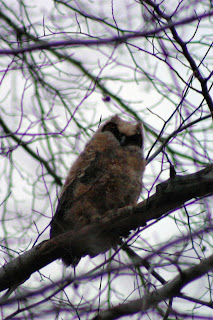 This little guy was at Clague Road Park, a small city park just down the road from us. Taken in 2004 with my first digital camera and a very low quality zoom lens. Ya gotta start somewhere.

Labels: Back to the Wild, Ottawa National Wildlife Refuge, Owl