That Fourth of July patriotic thing is still running around in my brain, hence the title of today's blog! (*Explanation for those not familiar with patriotic American songs, it should be "Purple Mountains Majesty..." lalalala)

Me and the Doodles (she loves that name!) went for a little visit to Magee Marsh and wandered around their really cool visitors center. At the back of the center they have a Martin house that was fully stocked with Purple Martins big and little! You really have to hear the sounds they make in real life, though if you click here, you can hear an individual. When they are in a group and busy hawking dragonflies, they make the most amazing cacophony of sound! It's as if there's an echo built into their voice box.

As you can see by the following photos, it's been a busy spring out here. Lots of new mouths to feed! And a few less bugs to bug us. Not that there's anything wrong with them!


As always, Mom is stuck cleaning up after the messy kids, while Dad just sits there, smiling, with his mouth full of food.

"Wake up kids! It's Dragonfly-O's, breakfast of champions!"


Here you can see the female eating an eggshell. The extra minerals help after the recent egg laying.

And here's a lazy kid. Snoozing and waiting for the next meal to be delivered! He'll be on his own soon enough.

Dad just chillin' after a hard day of hunting. 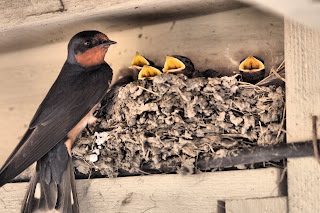 This 'little' family is nesting under the eaves of one of our neighbors at the BirdMobile! There's actually five hungry mouths packed in there. 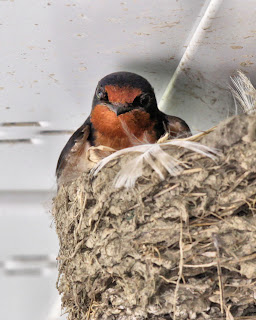 A few posts ago, I spoke of the Barn Swallows that are nesting on the sprinkler heads at the Ottawa National Wildlife Refuge nature center. I joked about fire codes being possibly broken with the nests built right on top of the sprinkler heads. Well, Rebecca Hinkle of the refuge checked into the situation and found no codes being broken and the Swallows are fine to nest there.

Since that time, all the little one's fledged and we're working on a second helping of mosquito eaters! Mr. Cranky-pants, above, has taken over one of the sprinkler nests. He likes the security of knowing if he falls asleep smoking, it would be extinguished quickly.

This one is doing it the hard way. He's clinging onto the wooden beam while putting a mouthful of mud into just the right position.
Ack. Mud.