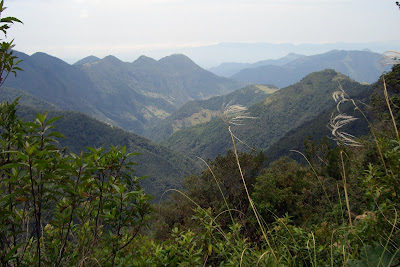 Take a careful look at the photo above taken by Laurie a couple of years ago.

I've been reading more and more articles about Mountain Top Removal Mining over the past few months. Not to mention the insane rants from the "Conservative" Republicans that have been all over the tv, radio and the print media. I guess it must be true if they say it, all of us 'tree huggin' Liberals' are actually Socialist-Nazi-Commie reactionaries out to destroy the free world. Oh, sorry, I forgot to mention racist also.

I guess we're supposed to fall in line with the corporate world and agree to the continued use of "Clean Coal." Close your eyes when you see those mountains blasted apart and leveled because it "creates jobs for the American people." It actually creates fewer jobs than traditional 'Dirty Coal' mining, but that's not important. Profit is important.

Ignore the waste that will be scraped away and pushed into any stream or river in the valley. Ignore the trees and plant life that will be bulldozed into oblivion.
Ignore the birds, reptiles, insects, mammals and the people that lived there for generations. It's being done for our benefit, the good of the world.

If these "Conservatives" would only use half the energy actually conserving something that they are currently using bad mouthing everything they don't like, imagine what could be done. Solar power, wind power, hydrogen power, there's so much that could be done. But, who needs facts when you have an imagination? Why bother taking care of the planet and your fellow man when there's a profit to be made.

Truly, what is the point at all?

Watch those birds carefully, the next one you see could be extinct soon.