A Life Bird at MBS!! 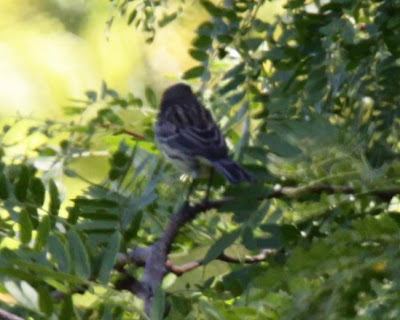 Recognize this fuzzy bird from behind? 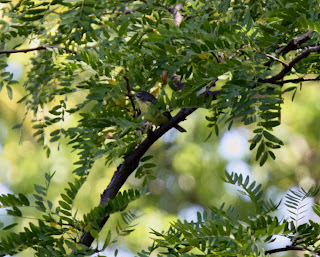 Holy Cow Dude! It's a Kirtland's Warbler! A life bird for a whole gang of folks attending the Midwest Birding Symposium, including me and the Doodles! Lots of dancing going on over this rare and endangered visitor!
An announcement was made after the morning speaker finished...and the placed cleared out! Everyone, it seemed, was headed for East Harbor State Park, including the Doodles and me to see if we could get a glimpse of this fall warbly thing. In 2002 there were just over 1000 of these left world wide. They are quite particular of the habitat in which they will nest, so we are very lucky to spot this lone individual. Their population has increased to close to 5000 over the past couple of years and they are hopefully on the road to recovery. 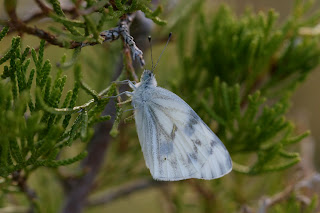 On another note, while out with Jim McCormac, we saw this Checkered White Butterfly, another lifer!

And speaking of seeing odd birds...Kelly Riccetti, aka 'Peanut', of Red and the Peanut fame was out tracking the Kirtland's Warbler also. You really must visit her blog for lovely writing and photos...butt not many behinds! She'll learn one day...

There's been so much going on out at Lakeside, it's hard to take it all in. I've met many of the authors and speakers including David Sibley(thanks for signing my guide!), Scott Weidensaul, Paul Baicich, Wayne & Betty Petersen (who I picked up at the airport and made them deal with my driving and conversation)and some guy named Bill Thompson III, not to mention all of the great birders from so many different cities, states and countries, including Herbert from Uganda.
Now I have another place on my list of countries to visit...
Posted by Dave at 10:21 PM