The Crown of Autumn... 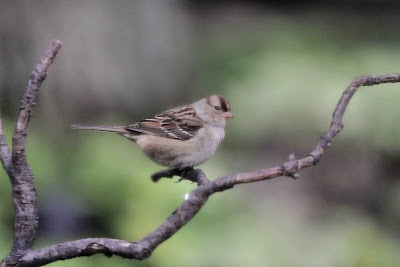 The first White-crowned Sparrow of the season.

You know summer is over when the White-throated Sparrows show up. And it's officially autumn when the first White-crowned Sparrow is found kicking through the underbrush in the garden as had happened earlier this week.

I was watching my "Fatbirder" ranking go from 322 down to 402 as quickly as the leaves were dropping from our trees. That's what happens when I don't post soon enough! There just hasn't been the opportunity to get out and get photos over the past few days. It seems as you get older, your parts don't work as well as they used to. Hopefully, I'll be out walking by next weekend.

In the meantime, I'll keep my eye on our feeders for anything exciting in the gardens! 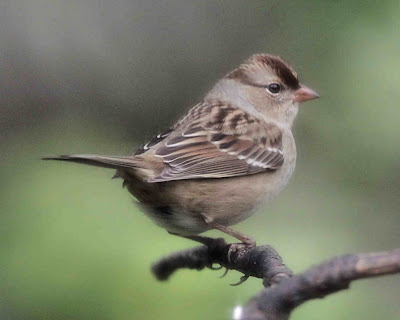 The first to arrive were the young White-crowned Sparrows.
I've seen a couple very bright adults, but haven't had any luck getting photos of them, can you say "Jumpy?"
This one was kind enough to land on a branch I have zip tied to one of our feeders AND spin around for me.
They are usually found feeding amongst the leaf litter, but a few of the youngsters have been on our sunflower feeders making it a little easier to photograph them.
Speaking of something exciting in the garden! I was just out talking with one of our neighbors when I spied a Brown Creeper going up one of our large Oak trees! Of course, no camera in hand...maybe next time!
Posted by Dave at 1:45 PM