Pardon, Garcon! Menu sil vous plait!
The high point of Christmas Day, for me at least, was a visit from our buddy Bob, the Cooper's Hawk. He stopped by the French Cafe in our garden to see what was on the menu. "Maybe you would like zee tres bon Mourning Dove Tartar?"
He walked all around the table to get a better view of the items on our menu for the day... Sorry to say, he left without a meal.
He did come back on Saturday for a little "Maison Sparrow."

The twins also stopped by for a little snack. Somewhere in our backyard, we have had a family of Blue Jays for the past three years.
At one point we had four eating at the feeder at one time, they didn't want to pose for me.
We also had the Tufted Titmouse gang over for brunch, they like to eat and run...and then eat and run some more... 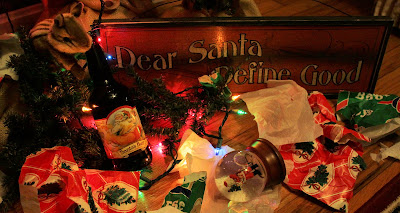 I hope you can zoom in on Bob's beer bottle there! This would explain his wacky antics of Christmas Eve!
Yep, that's a real bottle of beer imported from England.
Apparently, a "Butt" is a large keg used for aging beer. I know a few people with those...
Posted by Dave at 6:50 PM