Yep, that's a Worm-eating Warbler, but I don't think he's eating a worm...
This is another long post of pics! I can see by the Fatbirders number on the side that I'm slipping down...I'll post another rant next time to make things more interesting...or maybe I'll let Bob loose on you! That'll teach you!

I'll keep it short, these are from Sunday at Magee Marsh, a three lifer day! See what you're missing?

And here's the pretty pose.
"I think I went the wrong direction..." 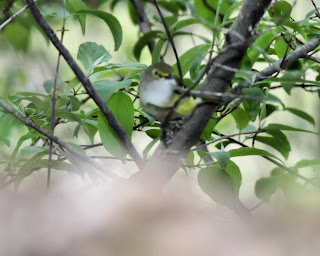 This would have been a great(and ONLY!) shot of a White-eyed Vireo, lifer number three,
if that stoopid Bob didn't push me because he saw a cute girlie chipmunk....ooooo that Bob! 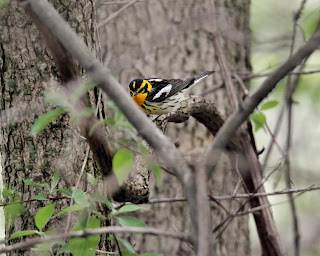 Not a lifer, but a cool bird to see, a Blackburnian Warbler, actually down low!

Anyone can post cute and pretty pics of warblers! Where else can you see the odd stuff but here?
It's a Chestnut-sided Warbler by the way, see the chestnut on his sides?

This is one of those great ones that gets folks confused! It's a female Common Yellowthroat.

Who's this mystery booty?

"Why, I'm the prettiest Northern Waterthrush in the marsh"
You should see him shake that booty!
Speaking of rump shots, you can see Palm Warblers by the dozens at Magee!

This Snowy Egret is working it!
Oh yeah, let your hair flow in the breeze baby! 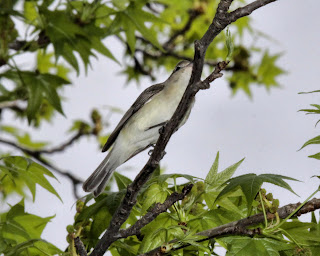 Your typical view of a Warbling Vireo... 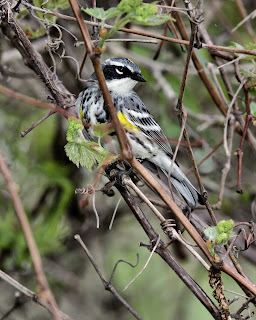 And we can't forget about all of the Yellow-rumped Warblers flitting about!
They'll keep your binoculars hopping!

A new pair of 'Doodles' for the Doodles! Courtesy of the gift shop at the Black Swamp Bird Observatory!

Speaking of BSBO...We'll be at the Biggest Week in American Birding starting on Thursday, when we'll be off to Canada...wha?...Canada? Yep, things start off at Point Pelee.

I'll try to post updates every night from the BirdMobile! Look out warbly things, here we come!
Posted by Dave at 11:11 PM