I believe wind turbines could be useful in creating energy, but research and good planning are absolutely necessary. A new turbine is planned for Camp Perry, along the lake front just minutes from Magee Marsh and Ottawa National Wildlife Refuge.

These areas are well known world wide for the vast numbers of birds that live, nest and migrate through them. I've been lucky enough to spend quite a bit of time seeing for myself the wonders that fly into our area. Soon that may change.

If more research isn't done, correctly, we will start to add dead and injured birds to our daily lists of migrating species. I won't rant about the morons that wrote the report and purposely left out key facts, but I will ask you to write letters to Congresswoman Marcy Kaptur and to the Ohio Department of Natural Resources.

You can read more about this on the Black Swamp Bird Observatory web site. Thanks... 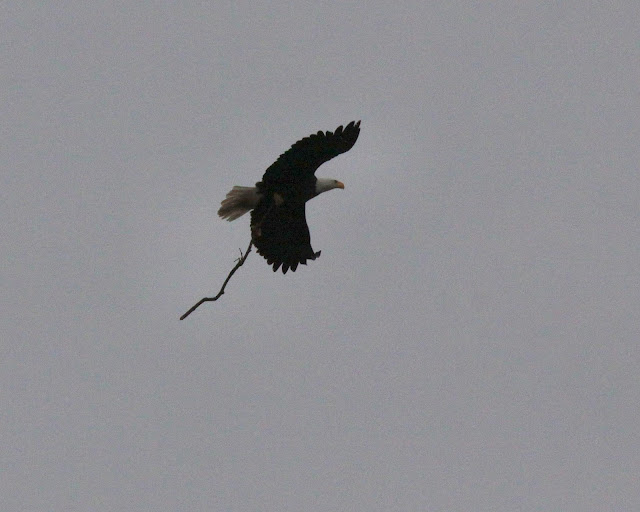 This Bald Eagle, and others, nest within a few square miles of the proposed site.

Here is a quote from Kenn Kaufman, a real expert from this area...

"The EA totally fails to acknowledge the fact that the lake shore represents STOPOVER HABITAT, where vast numbers of migrants are pausing during their migrations to rest and feed before continuing their journey. The EA repeats (on p. 61) the tired argument that "a vast majority of nocturnal migration of song birds, waterfowl and shore birds occur at altitudes greater than the height of most modern utility scale wind turbines." This is true - most nocturnal migration occurs at least several hundred feet above the ground - but it's irrelevant when we're talking about stopover habitat, where birds are dropping in and taking off in the dim light of predawn and dusk. Anyone who has been out on the Lake Erie beach at dawn on a good spring migration day will know that vast numbers of birds are flying low, paralleling the shore, in a repositioning flight at dawn. During their arrival, departure, and repositioning flights, these birds will be very vulnerable to more tall structures in the air column.


As another example of inadequacy in the EA, it refers (on p. 60) to numbers of waterfowl using the Darby Unit of Ottawa NWR, and backs it up with duck survey results from October 4, 2011. As any experienced birder or biologist knows, peak waterfowl migration in this area occurs in late fall. The use of numbers from the beginning of October must reflect either ignorance or a willful attempt to mislead.


The EA also understates the threat to local Bald Eagle populations. Ironically, the EA makes reference to the Altamont Pass wind factory in California, WITHOUT mentioning the fact that alarming numbers of Golden Eagles and other raptors have been killed there.


In short, the sections on birds in the EA are slanted, inadequate, and inaccurate. It's no wonder that both the federal and state wildlife agencies were sharply critical of the EA. The fact that their comments (and ours) are being ignored should be deeply disturbing to anyone who cares about wildlife and about transparency in government.


The public is allowed to comment on this from now through 5 p.m. on November 30. To see the information on the comment period, here's the link:
http://www.dnr.state.oh.us/coastal/Coastal_Main_Menu/HelpforLandowners/LawsandRegulations/ApplicationNotices/tabid/20851/Default.aspx


The Camp Perry wind turbine is currently the third item listed under that link, under Consistency ID # 2012-073."