My first warbly shot at Magee!
(By the way, it's a Palm Warbly.)

I find it hard to believe that ten years have passed since The Doodles first met Kim Kaufman in Oak Harbor at the old Black Swamp Bird Observatory office. We were still new to birding and Doodles heard about this Magee Marsh place. Kim filled her in and told her what an amazing place it was...especially in May on International Migratory Bird Day. We thought, what the heck, let's check it out...ten years later...still!

Kimmay doing what she loves to do, teaching children about the wonder of birds. 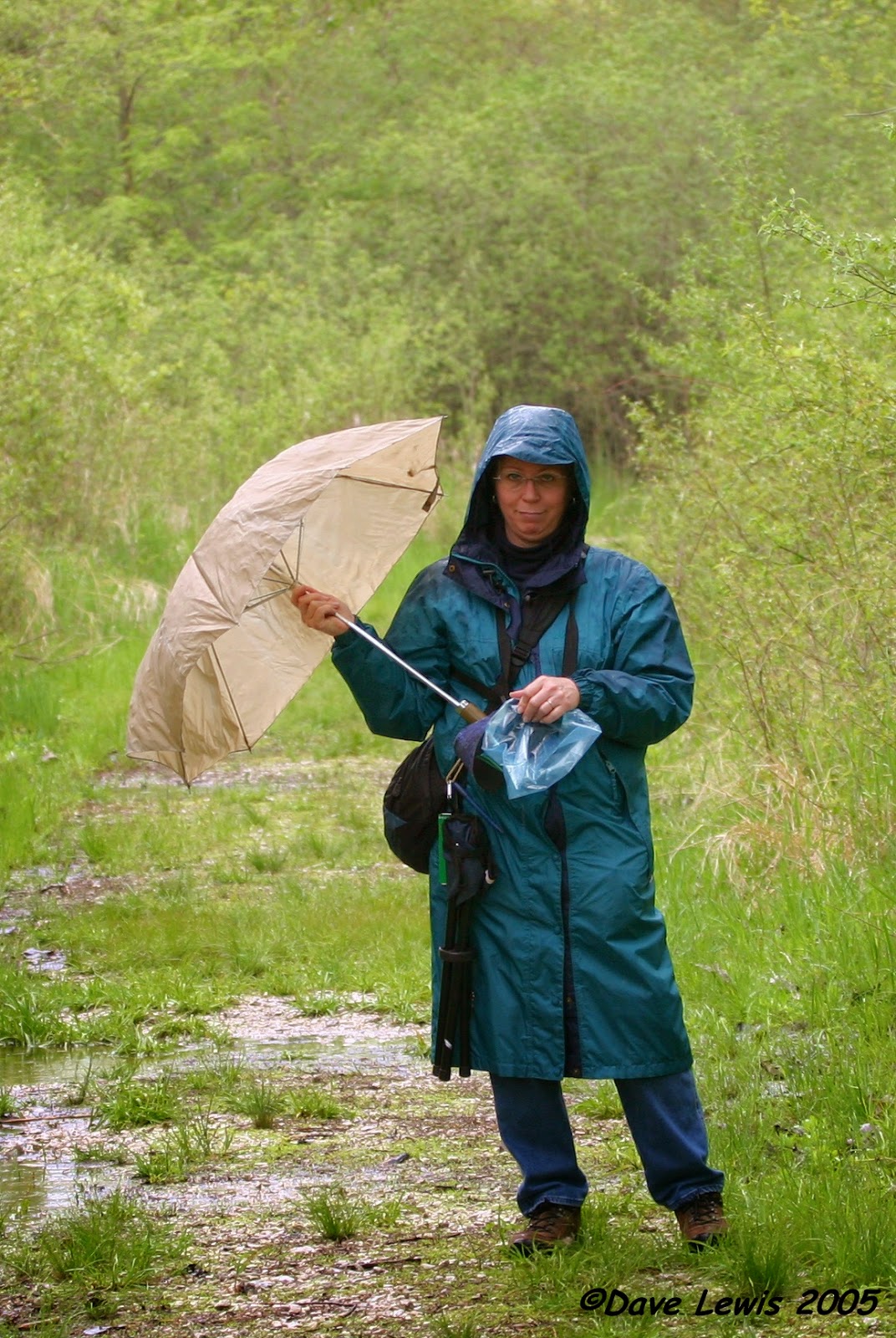 Just a little moist out today...


I learned that when it rains...don't aim up!
(Nashville Warbly...not from Nashville.)

This guy looks familiar..why it's that crazy Kenny K!
You never know who'll you'll meet on the boardwalk.


The butt that started it all.
This Black-throated Blue Warbly would not turn around...so...
when life gives you lemons of butts...make...uh...the best of it.


Our friends start taunting me about my "skills."
I thought, fine...I can do this better than anyone else!
How many butt shots of Green Herons have you seen?
Ha...only mine!


This was our first visit to bird banding at BSBO.
...and one of our few Mourning Warbly encounters!
That's Mark Shieldcastle just in case you didn't recognize him.


2007...
This was the year I found my favorite photo of a Black-and-White Warbly!

We met Don and Lillian Stokes and they signed The Doodles binoculars!


Speaking of Doodles...it's a Timberdoodle...
or an American Woodcock.


This photo of a Northern Parula made it to the cover of the Kirtland Bird Clubs calendar!
AND it was not a behind... 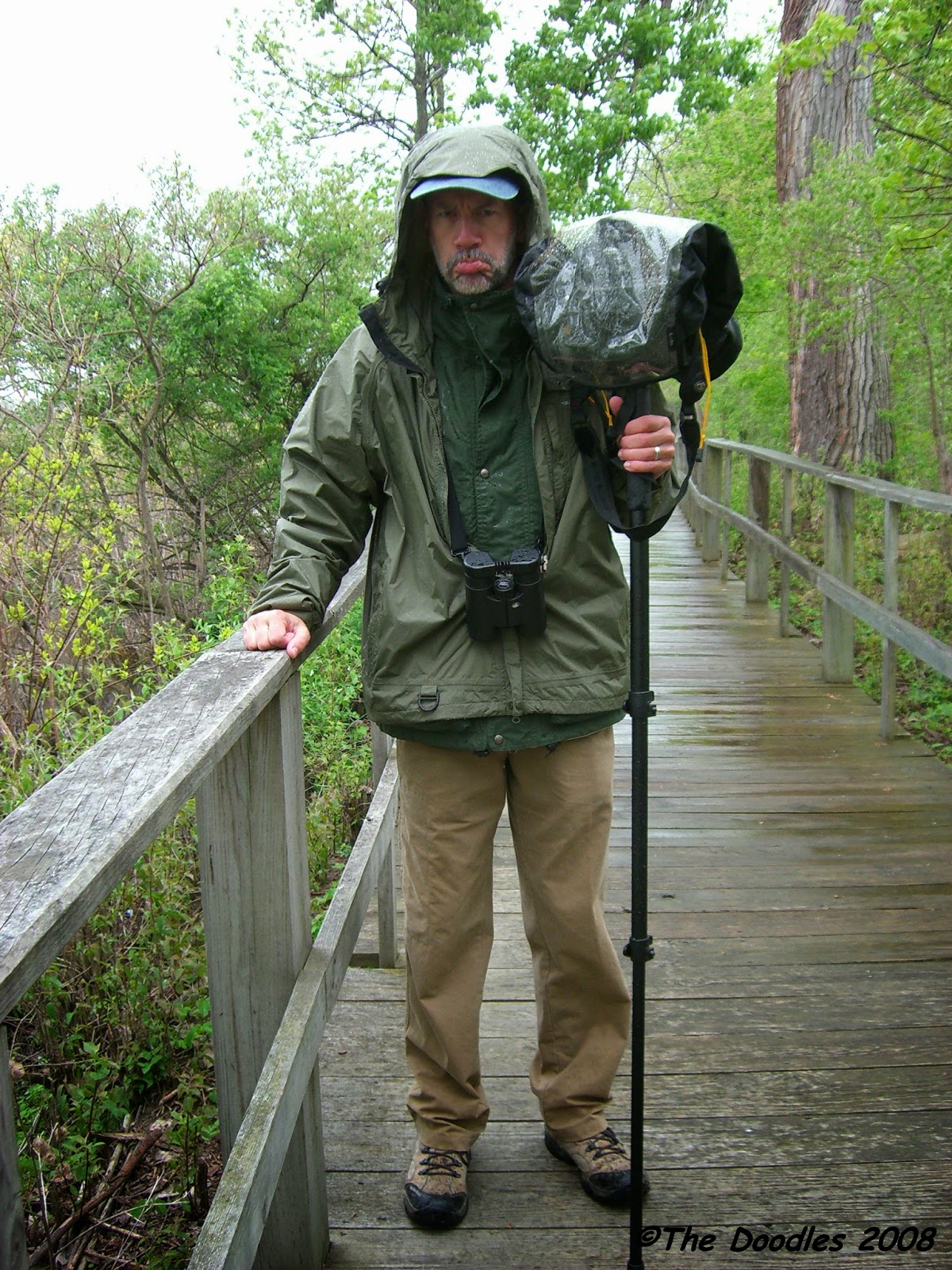 Yep, it's raining...on the good side...there's no one else on the boardwalk!
Those warblyz are mine, ALL MINE!


Oh, it cleared up...but those silly birds are still facing the wrong direction!
No matter what anyone else says, this is a female Black-throated Blue Warbly, not a Tennessee!
(Something we learned that year...just because you have expensive bins, doesn't mean you know what you're talking about.)


Did you know that Bay-breasted Warblyz are great dancers?
See, you learn things here.
Sort of...


I was sitting on the boardwalk shooting between someones legs to get this Golden-winged Warbly.
Ya gotta do what ya gotta do!


Look! An Ovenbird...where's his kitchen? 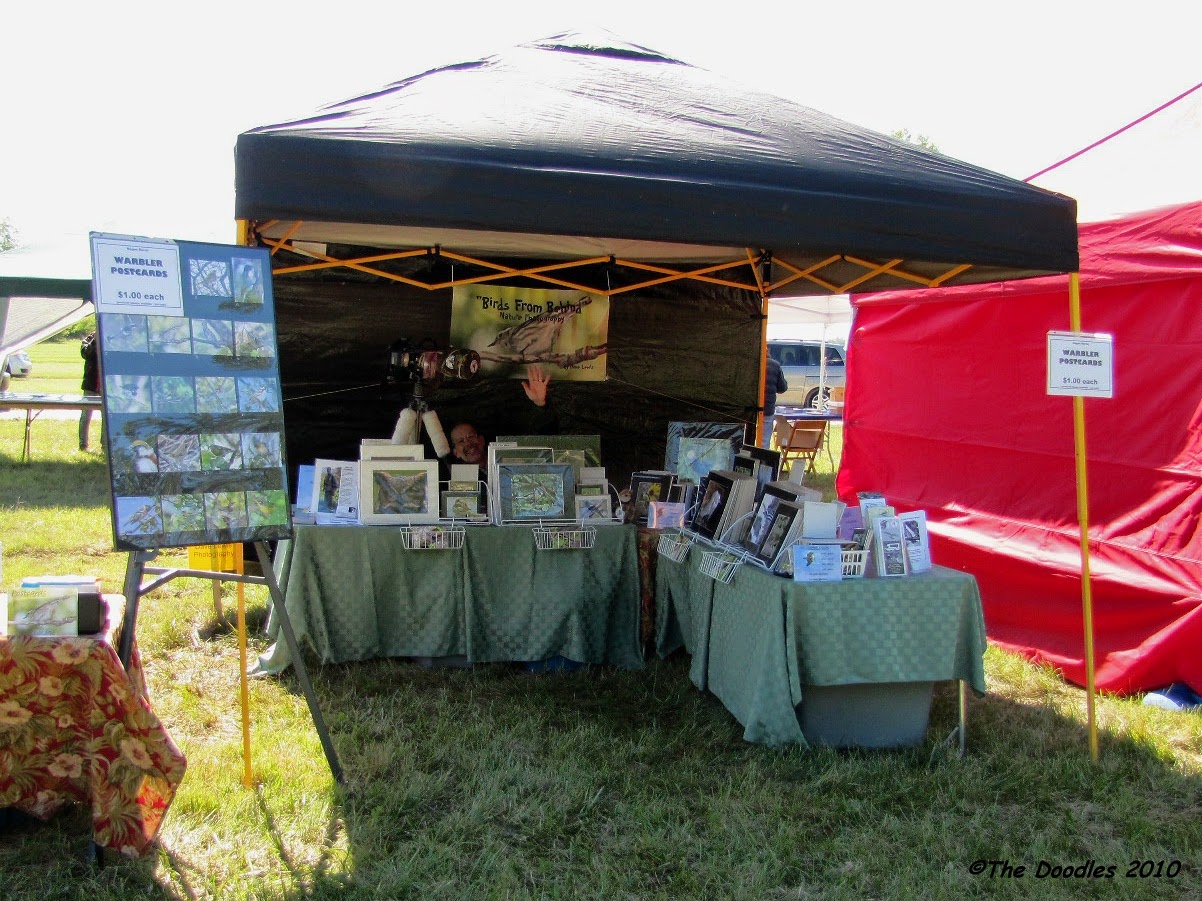 Silly people, they actually let me set up a tent to sell photos and blog live from Magee.
The day before was horrendously windy and many tents blew down.
Good ol' Matt Mendenhall from Bird Watching Magazine was next to me...
he also got his truck stuck in the mud...I helped push him out and got a nice covering of mud.
Camouflage. Yep. That's what it was. 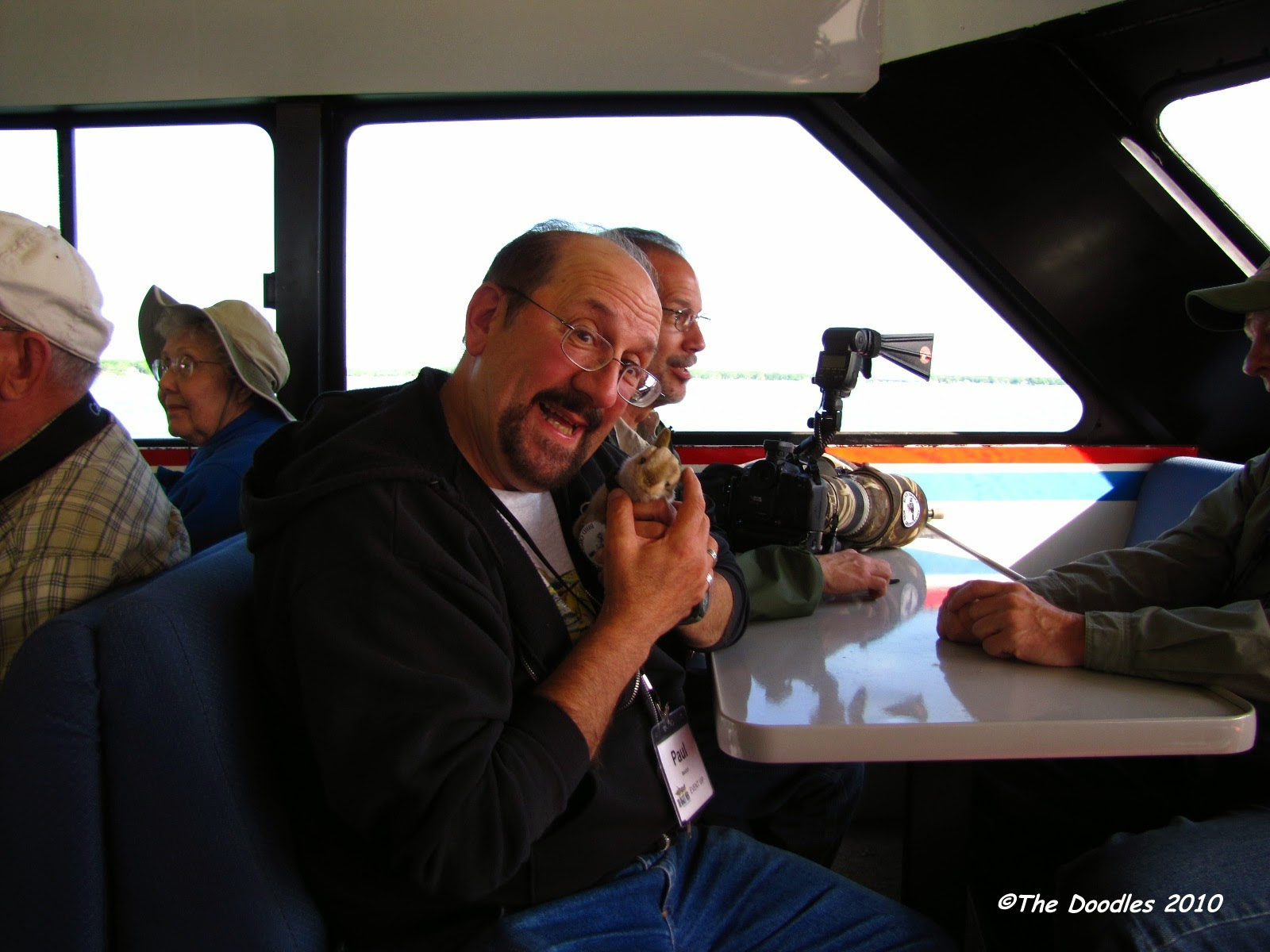 
Everyone's cameras stopped clicking...but mine.
How many chances do you get to shoot a Kirtland Warblyz butt?


This little bird had a number of people stumped.
We had the whole gang from Tropical Birding looking.
Then we found Kenn on the boardwalk.
After some staring and um-humming...it turned out to be a female Pine Warbler.


And Red-eyed Vireos really do have red eyes!
You would too if you ate bugs.


A friendly old Asian woman with a very hard cane spotted this bird close by.
She was very angry with me because I couldn't see it.
She hit me with her cane...twice...hard!
I tried to explain that I was color blind and red disappears into the green background.
It wasn't until it came closer that I finally saw it.
Silly red birds... 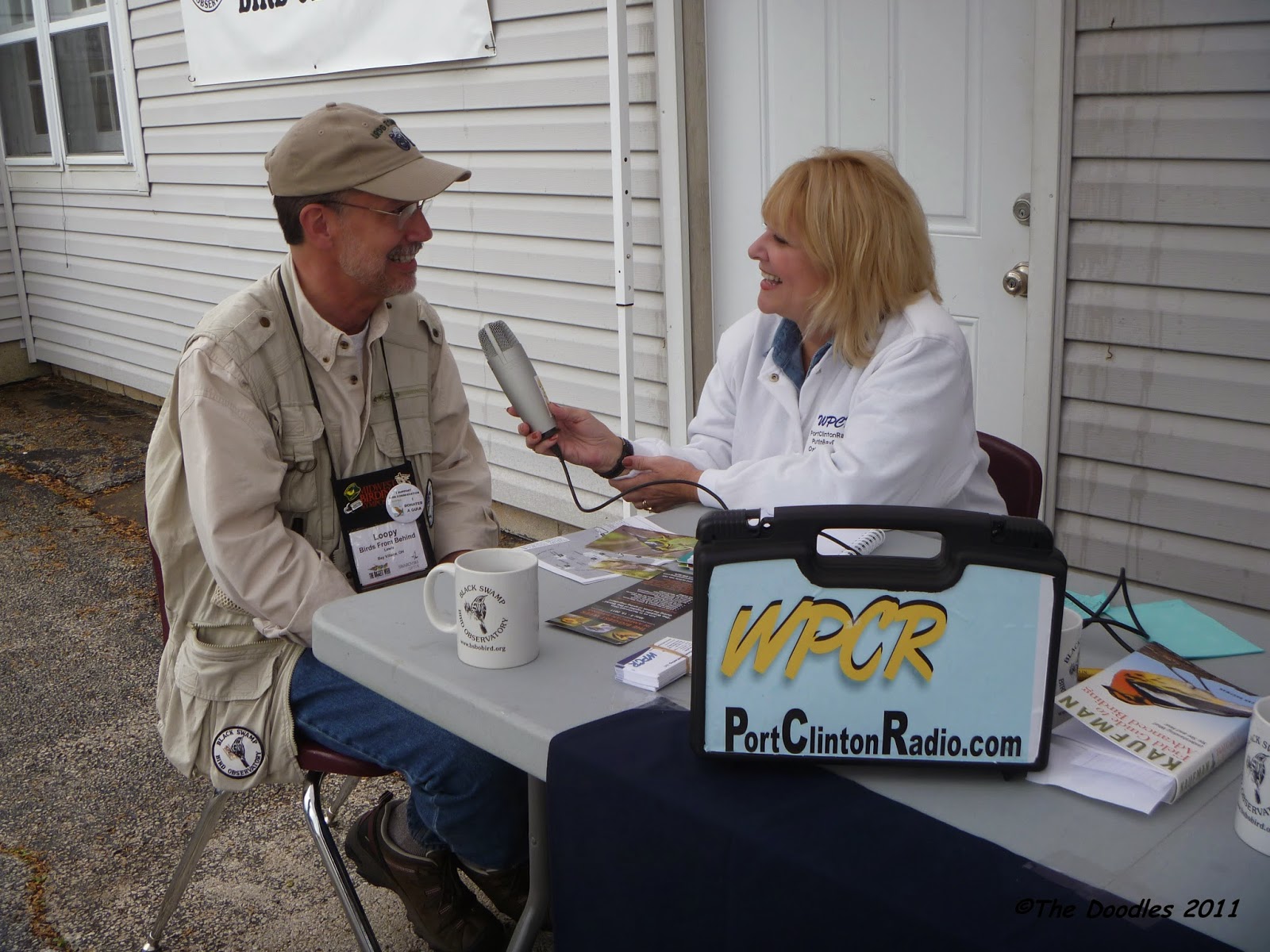 Kim "volunteered" me to be on the radio.
I don't think she realized what she was getting into....Mwahaha!
Did I ever tell about being on WGAR in Cleveland doing video reviews?
No?...well...

This Doodles was almost as close as the other Doodles!


This Prothonotary Warbly shot made it into Bird Watchers Digest a couple of years ago.
I threatened them. Works every time.


This is why you listen to young Amish children when birding.
They're better than me!
I never would have seen this Whip-poor-will otherwise.

2013...
At last...a Black-throated Green Warbly butt!
You would think since there are so many it wouldn't be so difficult...
Then again, you aren't me.


(What?! No 2012? Nope. That was a rough year with very little birding...anyway...onward and upward! Times awasting!)

Wait a second...that's not a butt shot!
Well, even I don't always get a break.
Still, you gotta love those Blackburnian Warblyz!


The easiest butt to identify in the wonderful world of Warblyz!
Magnolia!


I'll leave for now with this Prothonotary Warbly...
We'll be back to Magee and more Warbler Madness!
Posted by Dave at 8:22 PM