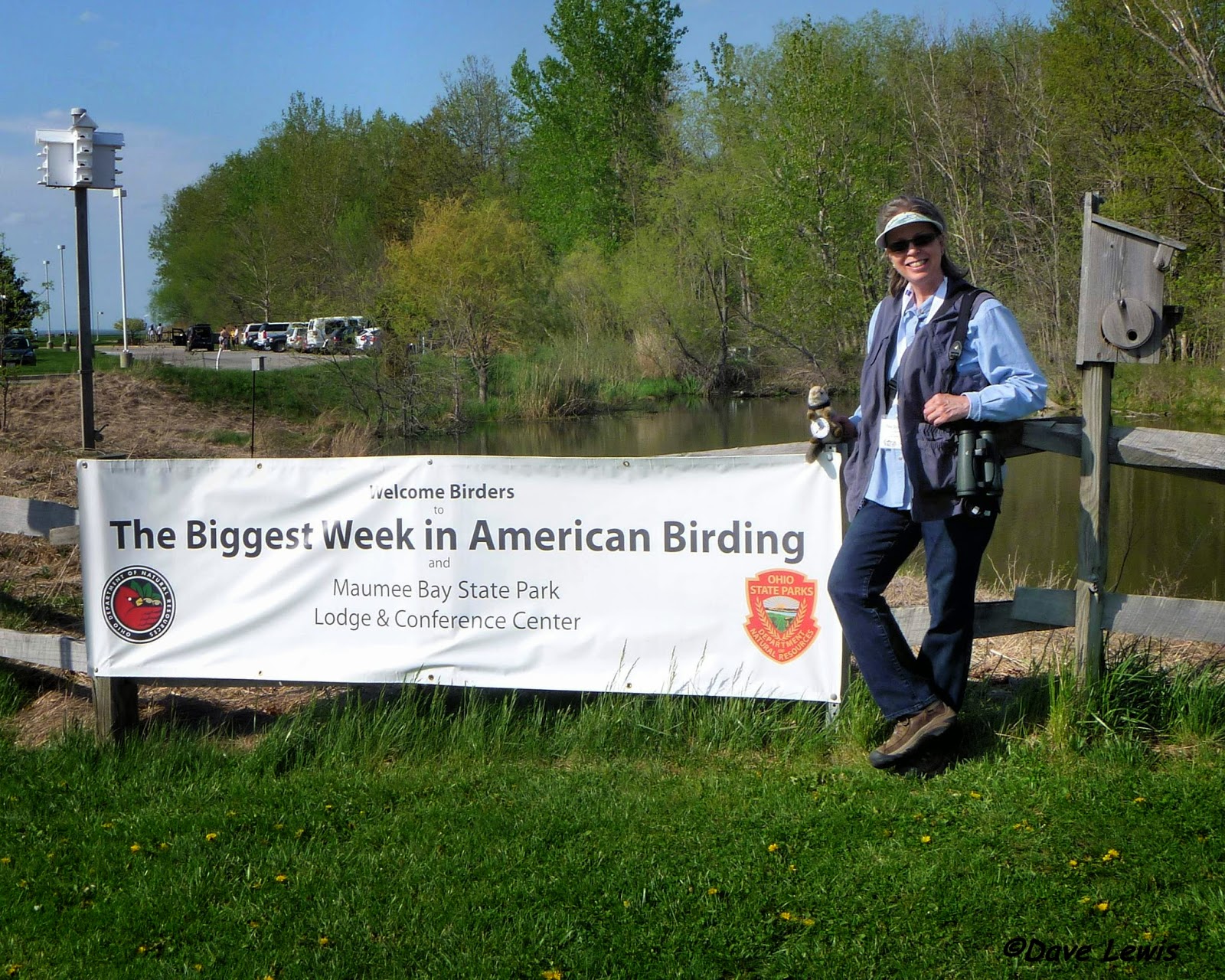 Yes kids, that is a happy Doodles(with Bobb, remember him?)!

Thirty down...fifty five to go...yoiks. Little by little, we're adding to our list of birding sights along the outstanding Lake Erie Birding Trail. Luckily The Doodles is keeping a list, because I've already lost track...and that's why I'm called "Loopy."

So...here we are at Maumee State Park, right on the shores of Lake Erie AND visiting The Biggest Week in American Birding! It was hard to tear ourselves away from the crazy boardwalk at Magee Marsh, but we had to register for the BWIAB and get The Doodles her goodie bag...and visit with our buddies that we only see once a year. Oh, and do a little birding along their boardwalk and trails. 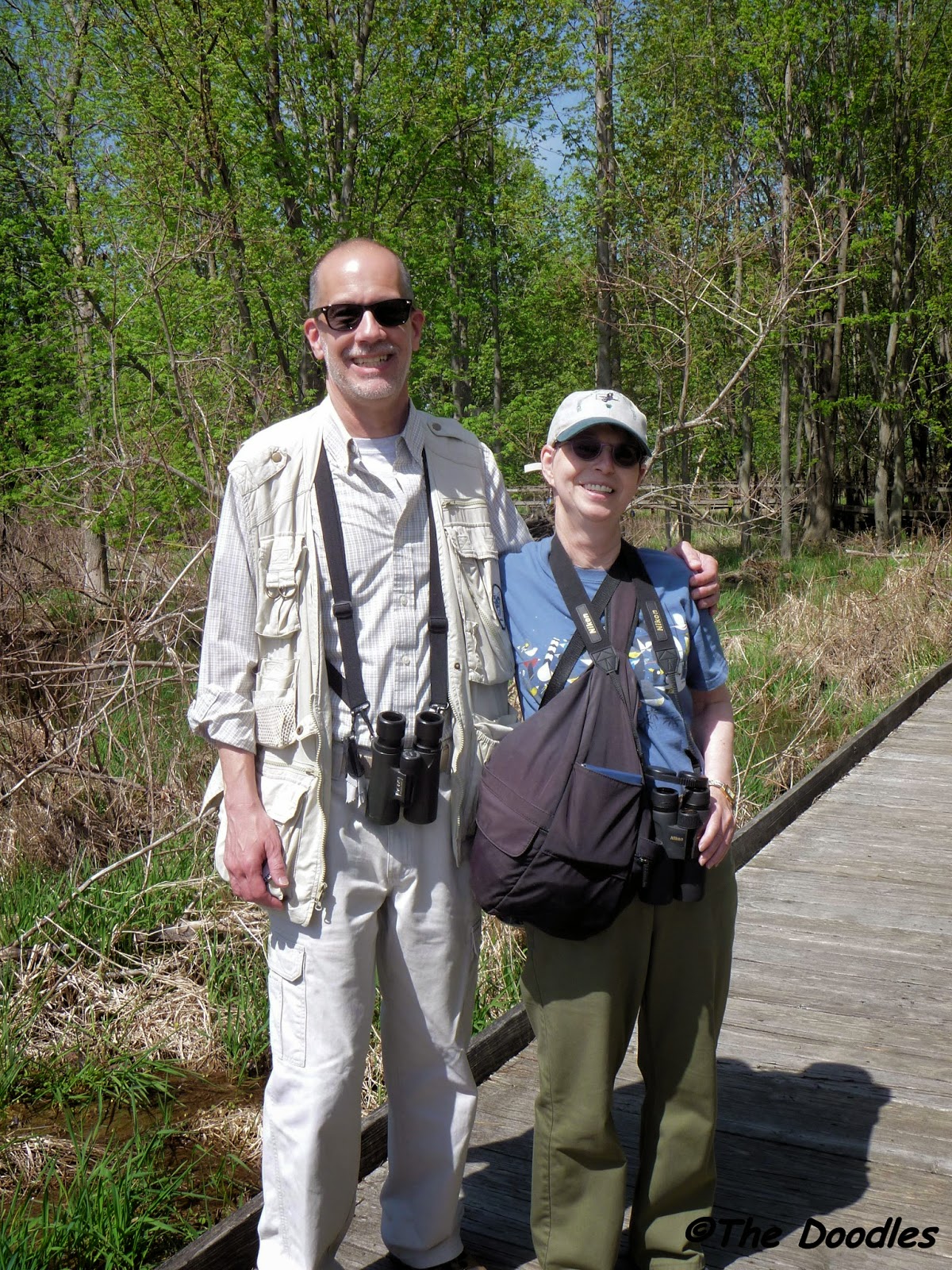 The Loopy one and The Debbie one.
As we were walking through the parking lot to the lodge, we heard the pitter pat of foot steps behind us, followed by "Hey, aren't you Dave, the Birds From Behind guy?" That was so much nicer than hearing "Hey, it's the burdz buttz guy!" After thinking for a moment, (she didn't look like she was angry about my blog) I said "Yup." Hard to believe I know, butt she likes this blog. That now makes seven of you in the world that need as much help as me. WE ARE NOT ALONE!

Anyway, after a little talking, she told us of a couple interesting birds perched along the boardwalk that me might be interested in seeing. Well, duh! If there's a chance that I can see a bird...especially from behind, I'm there! After ambling a little ways down the wooden path...behold!


Yep, that's a lovely Common Nighthawk chillin' out in the wetlands.


Conveniently perched in a way to view both sides...that is left and right, not fore and aft.
Maybe next time.


Under one of the nighthawk trees was the fattest Canada Goose I have ever seen!
She definitely has that nest covered...and then some.


To top things off, Debbie led us to a tree just across the water with another Common Nighthawk snoozing away.


Without going for a wade, I could only view one side...and no butt shots today.
Next time!
Still a two nighthawk afternoon is always good!


The rest of the walk was very quiet as it was late in the afternoon.
Every once in a while we'd spot something zooming through the branches.
This was a young American Redstart not sitting still like most kids. 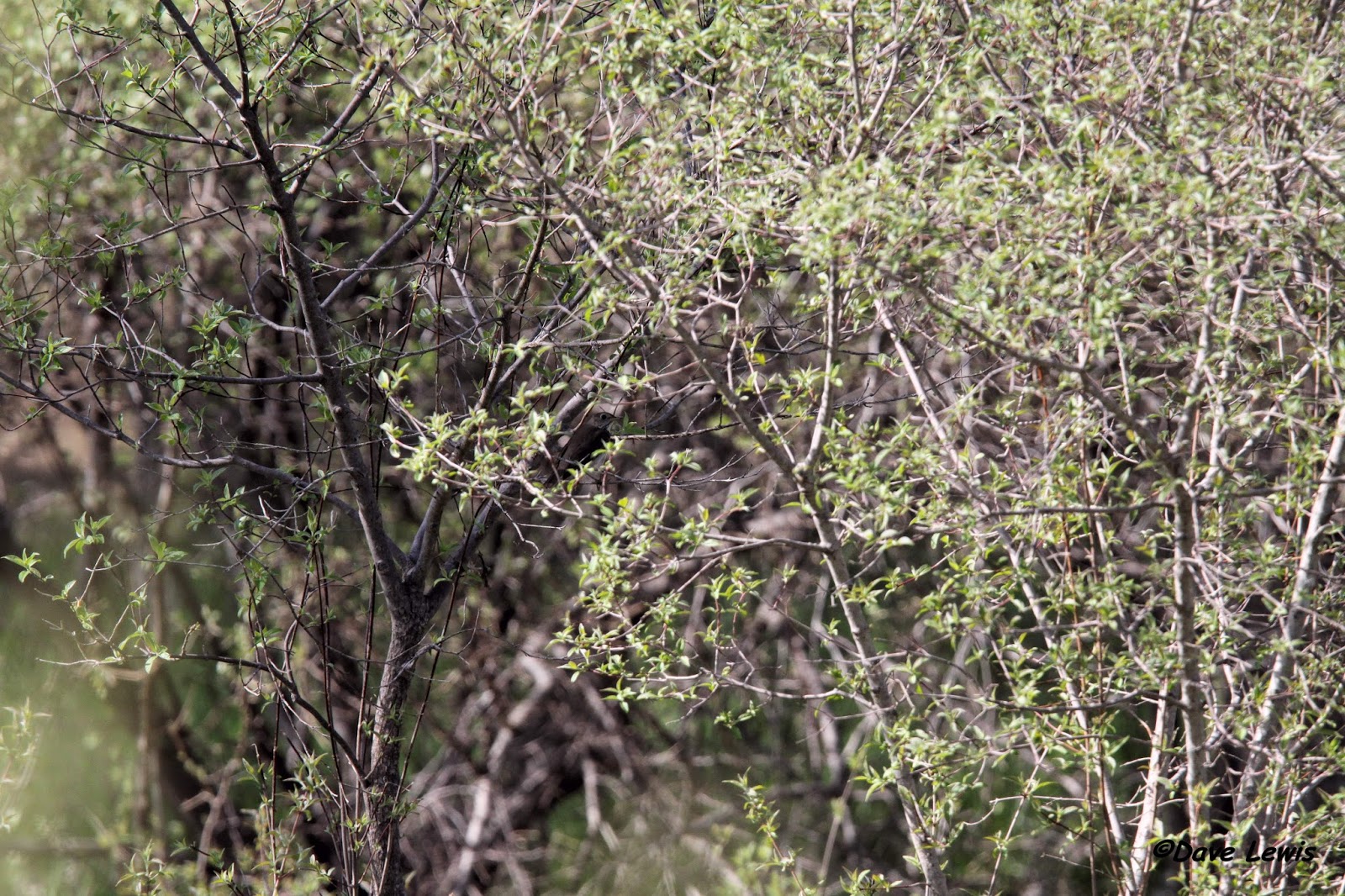 Still waiting for Canon to send that 500mm lens.
Yeah, there's a bird back in there.
I'll give you a hint, it's a Swainson's Thrush.
Oops. 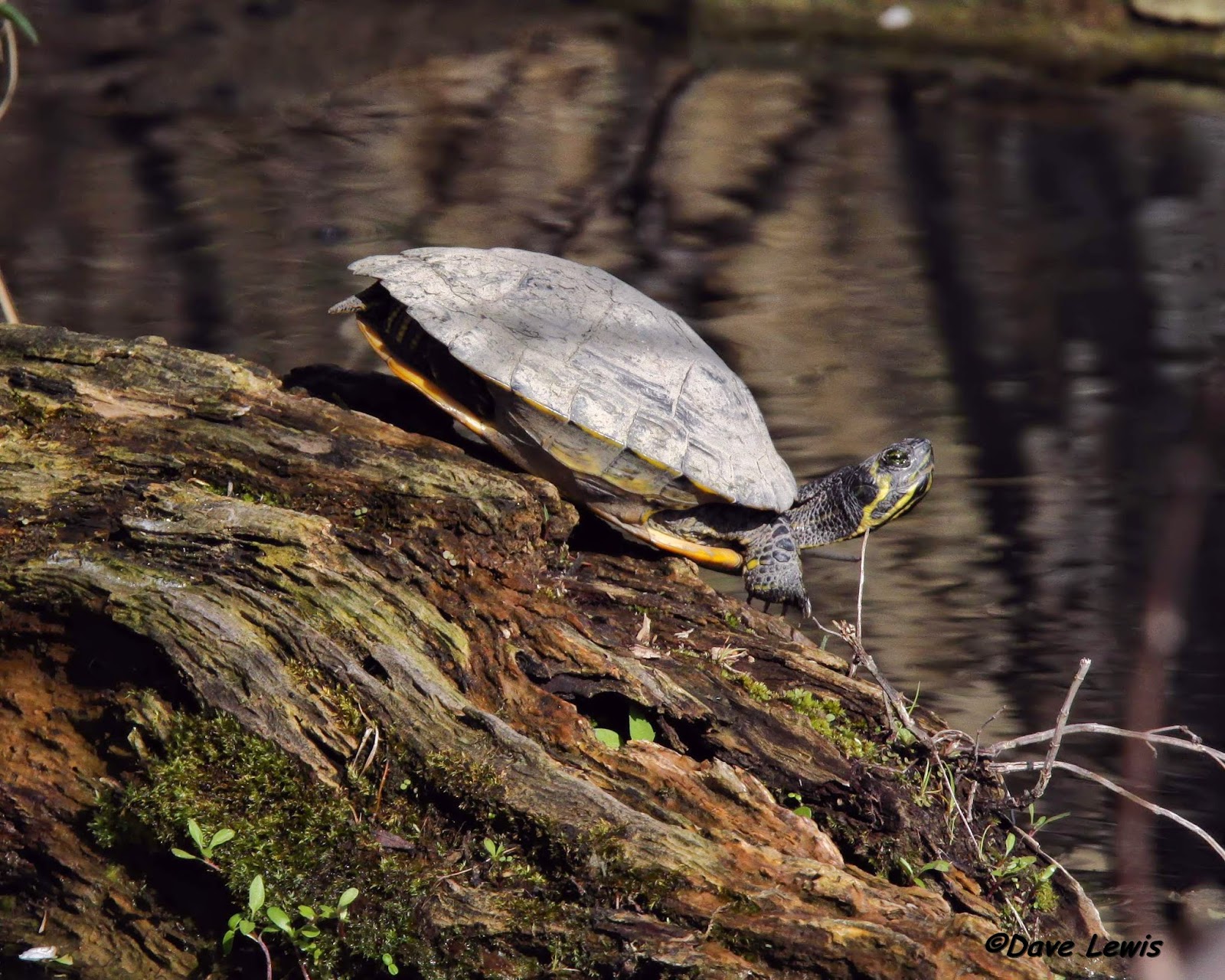 There were plenty of Midland Painted Turtles! 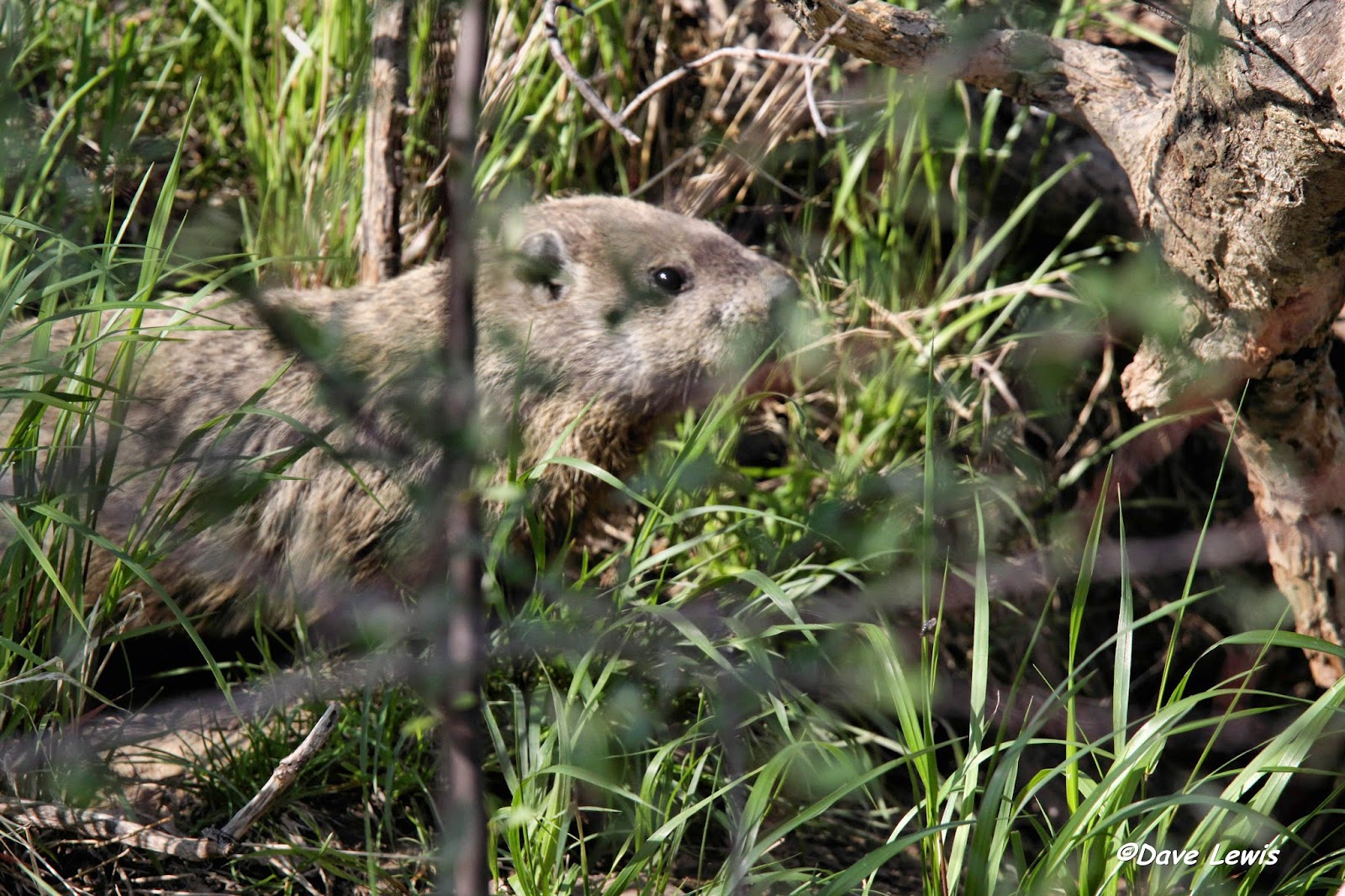 This Groundhog popped up out of his hole and we scared the heck out of each other.
The Doodles laughed at me...again.


It turns out he was trying to show us a bird.
A much sought after bird around here this time of year!
A skulky skulker...


And it even turned around...for a split second.
If you haven't figured it out, it's a Mourning Warbler.
One of those secretive little guys that hides way down low and taunts you with a peek every now and then... 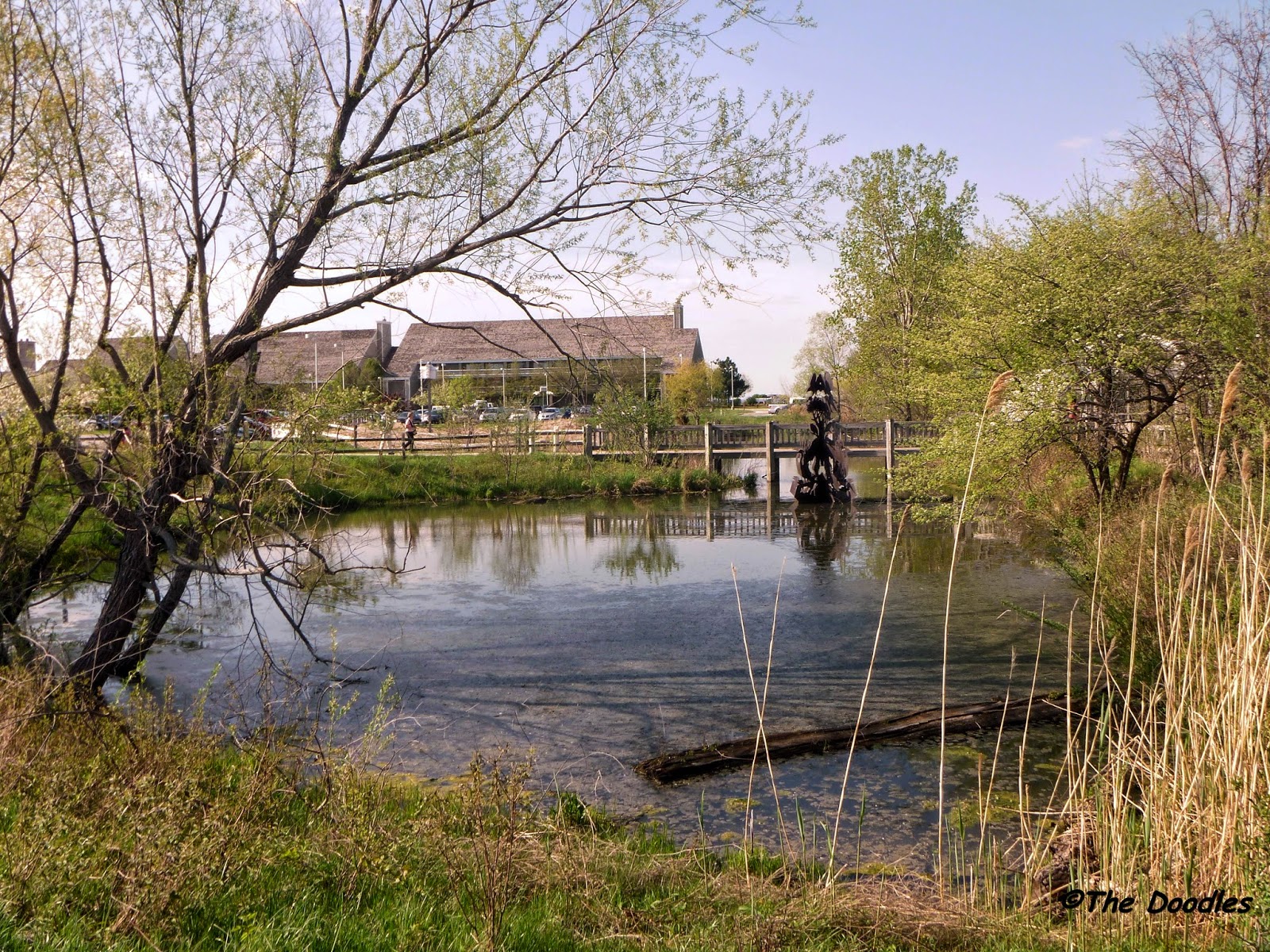 This is were he was hiding, right next to the nature center and their pond. 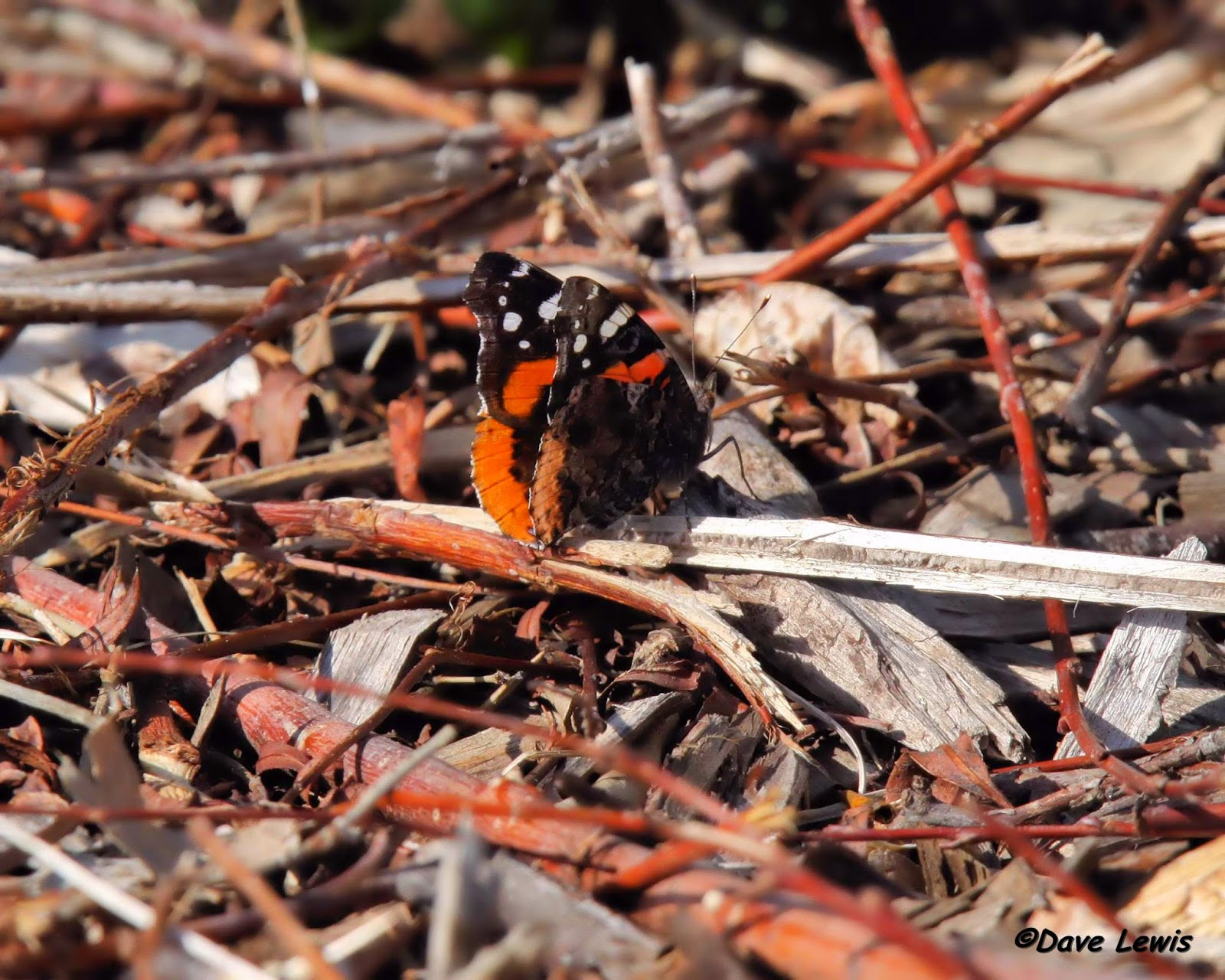 At last, the butterflies, like this Red Admiral, are starting to show themselves.
No more snow, please! 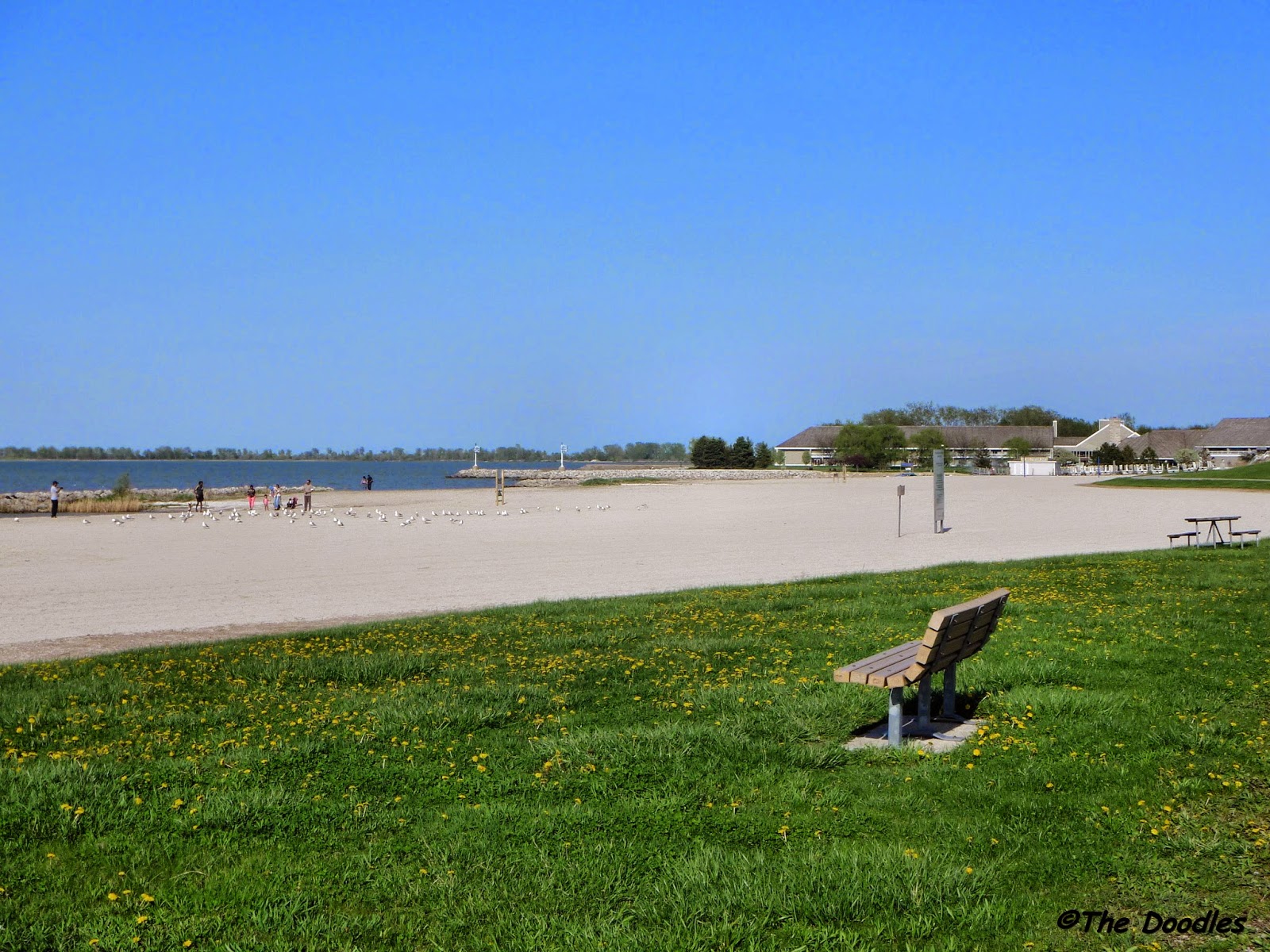 The Doodles gives Maumee a high rating on her "bench survey"
"Five Benches!" The highest...


The Ring-billed Gulls and the Common Terns like it too.
If, unlike me, you can swim and enjoy being underwater where you can't breathe and strange creatures live, you will like their beaches.
I'll stick to the woods...where I can breath, stay relatively dry and not get eaten by a fish.


"Even Tree Swallows on lamp posts do it..."


It took them a number of crash landings before they figured out how to "do it!" 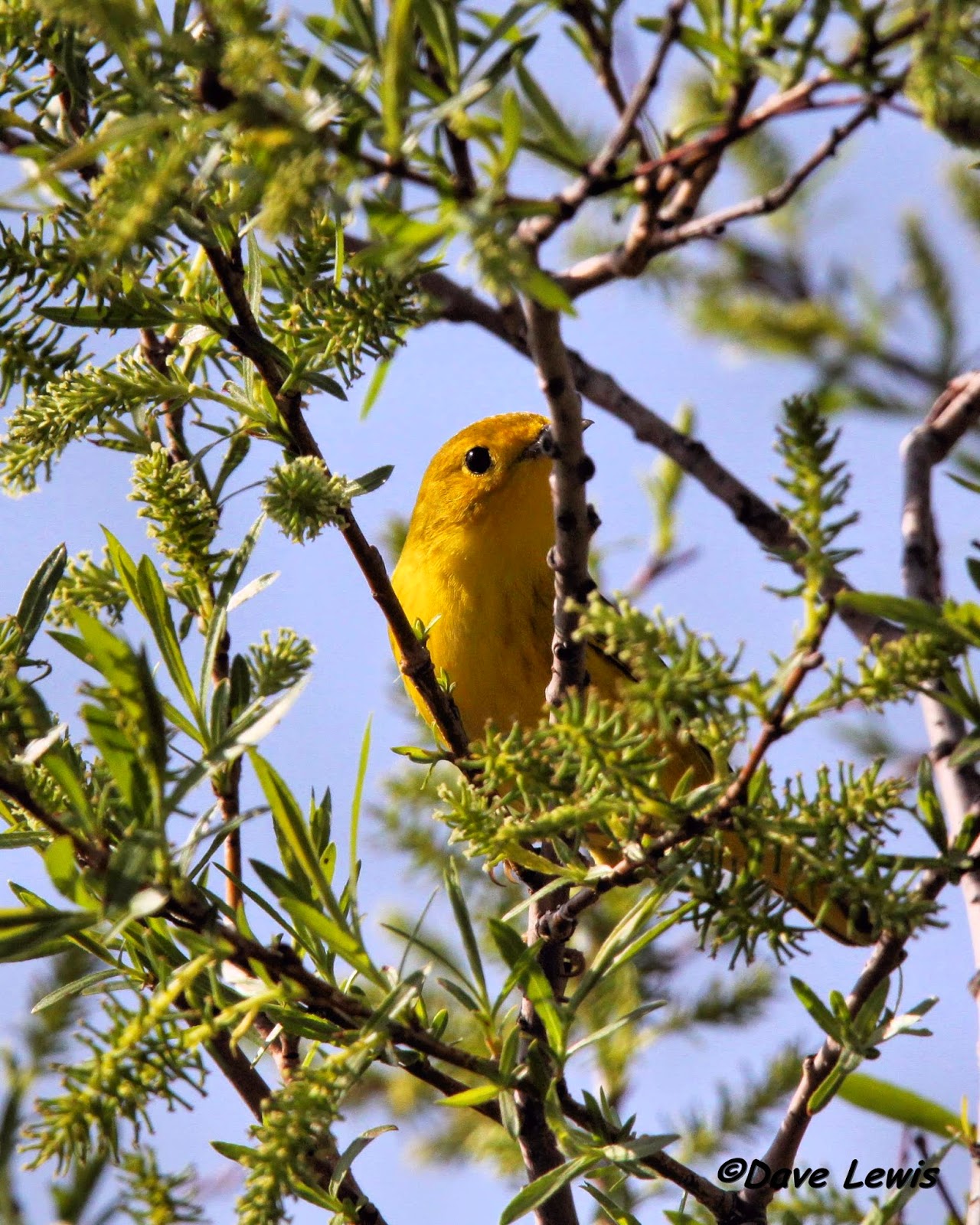 Just so you don't think I'm some sort of wacko,(though you'd be right!) I wasn't the only one watching!
Yellow Warblyz are a bit voyeuristic as well!