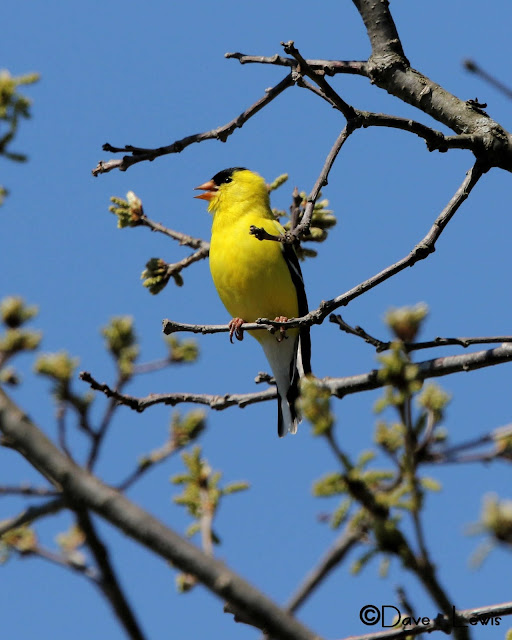 So, were was I?...it's a crazy spring with lots of trips to go birding, hiking, camping for the first time, cook outs...and more birding. I think I've gotten just a wee bit behind on blogging, so we're going to play catch up for a while... today I'm back at Pond Brook in the Summit County Metroparks(not really today...butt you know what I mean...)

I had a lovely quiet ramble through the woods, on and off the boardwalk then back into the woods before having my brown bag lunch along the babbling brook. Me and babbling brooks have a lot in common in case you hadn't noticed...

Anyway...on with the show! 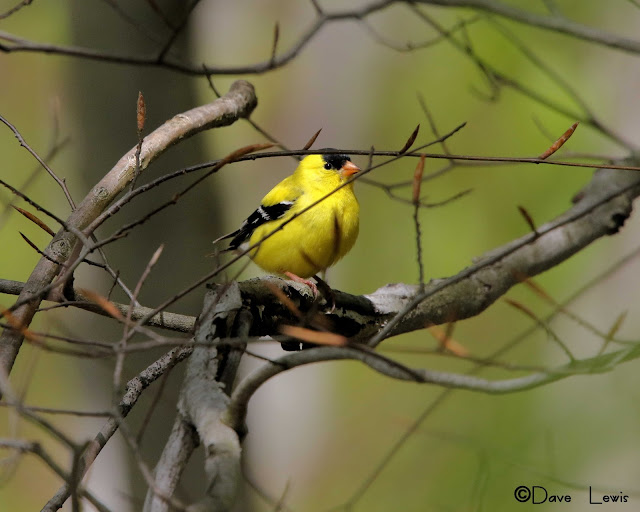 I found another American Goldfinch hiding in the tangles.
They make great substitute warblies... 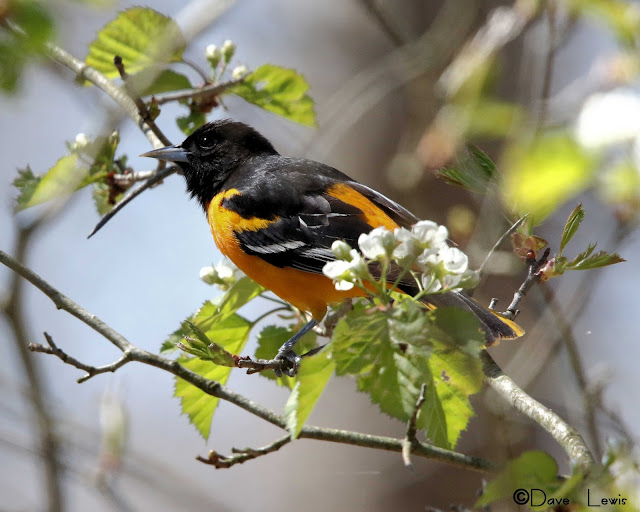 Near the end of the boardwalk I heard this beautiful singing just ahead of me in a flowering tree.
When I got closer I found this gorgeous Baltimore Oriole bouncing from flower to flower drinking up the nectar and singing like crazy.
Must have been all the sugar... 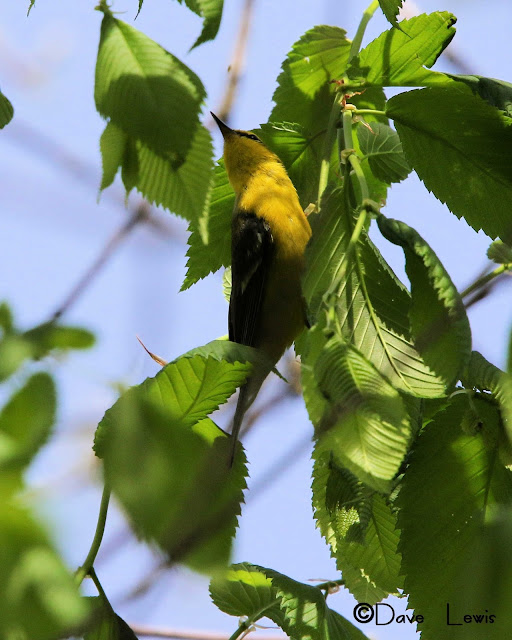 This was the biggest surprise of the day!
I heard a buzzy bird song high in the trees and followed it, cause that's what you're supposed to do.
This little bird looked like a warbly, but was always high up and hidden behind the leaves.
He finally sat still for a second in an opening...and  oh my!
It was a beautiful Blue-winged Warbly! 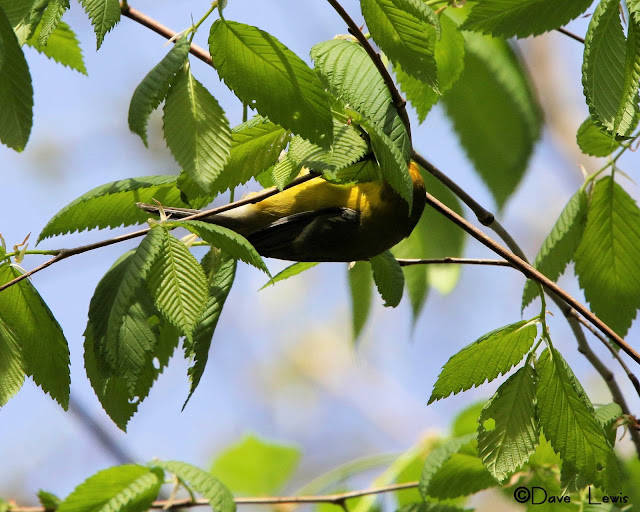 He was kind of shy. 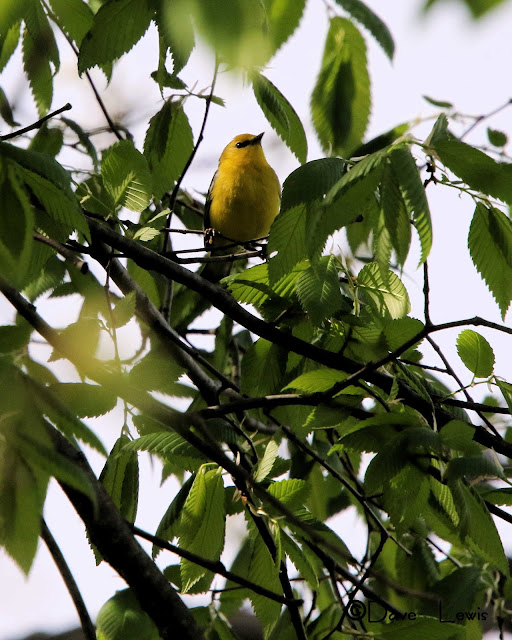 But at last, he came out and posed for me!
He wasn't very close, but who cares! He's a warbly that I don't see often!
Topped off a perfect day! 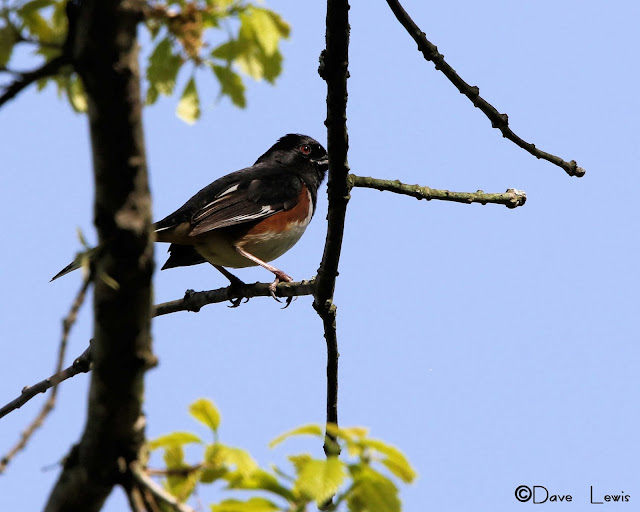 Eastern Towhees do not like their portraits taken!
I wandered off the trail listening to his "Drink your Teaaaaaa!" song until he finally sat still long enough to get one photo.
At least it was from behind! 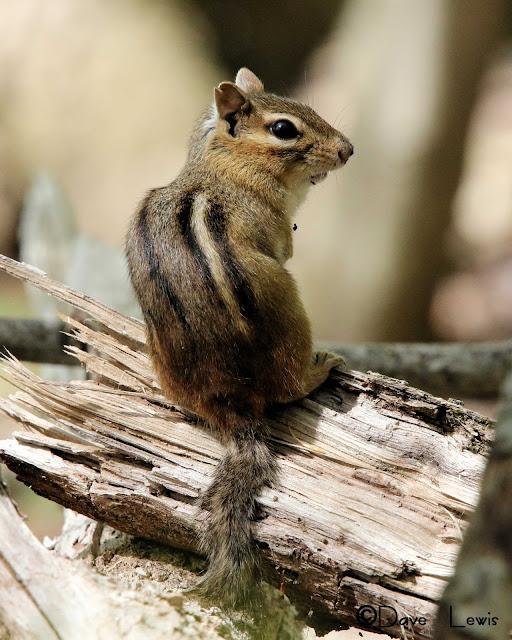 This Eastern Chipmunk gave me the sexy cheesecake pose.
No relation to Bobb.( Remember him?) 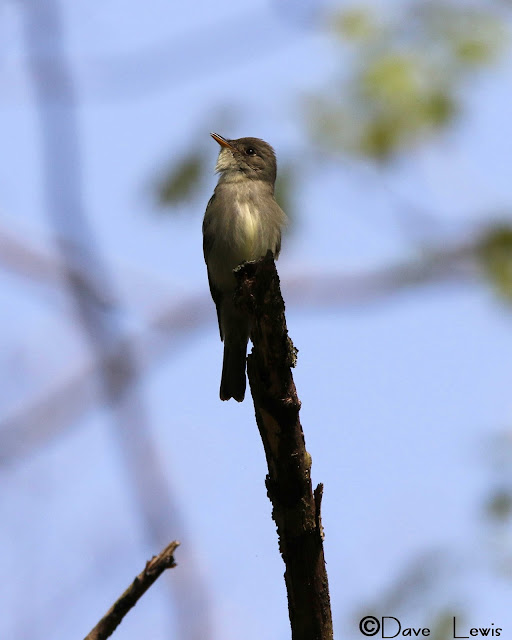 "Pee-A-Wee!"
You can always tell it's an Eastern Wood-Pewee as soon as they sing! 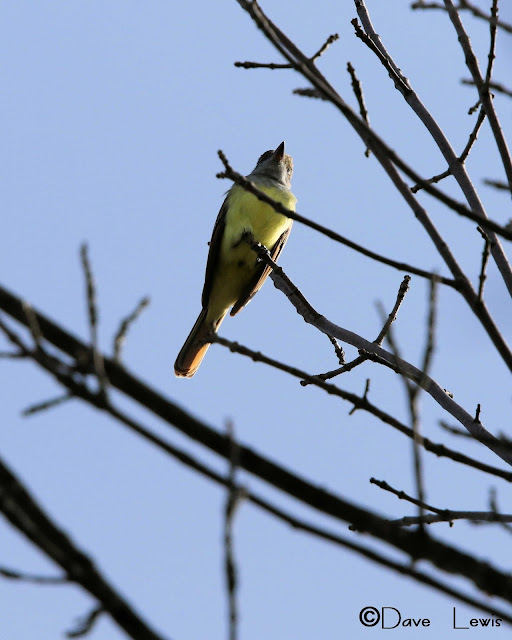 Another surprise for the day was this great Great-crested Flycatcher.
I heard this odd song overhead and when I found an opening to see him clearly I was as pleased as pleased could be!
Another bird I haven't seen often...at least until this year. 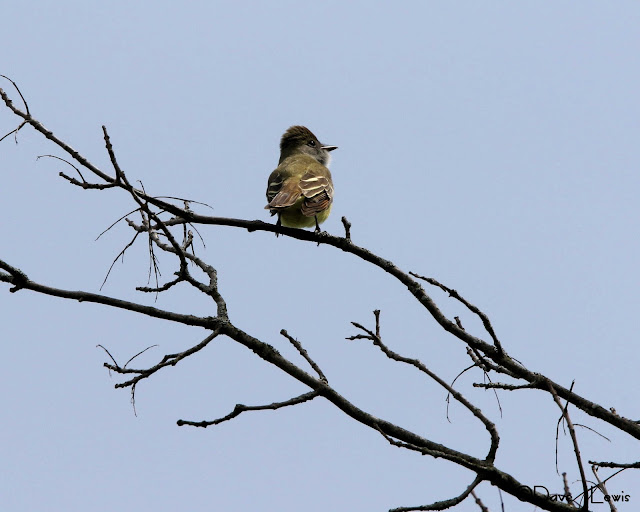 There were a few of them scattered throughout the park.
This one even offered the proper angle! 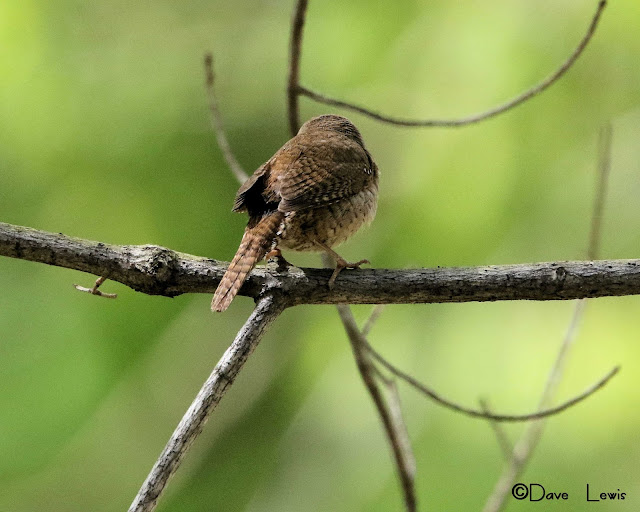 House Wrens are terribly suspicious little birds and don't make it easy to sneak up on them to get "behind" shots.
This guy was distracted and I managed one before... 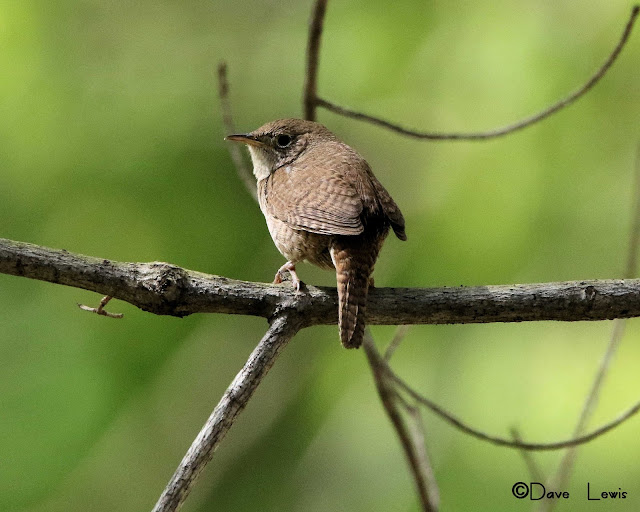 ...he turned around as soon as he heard the click of the shutter and off he zipped.
He wasn't as fast as Loopy, King of the Burd Buttz! 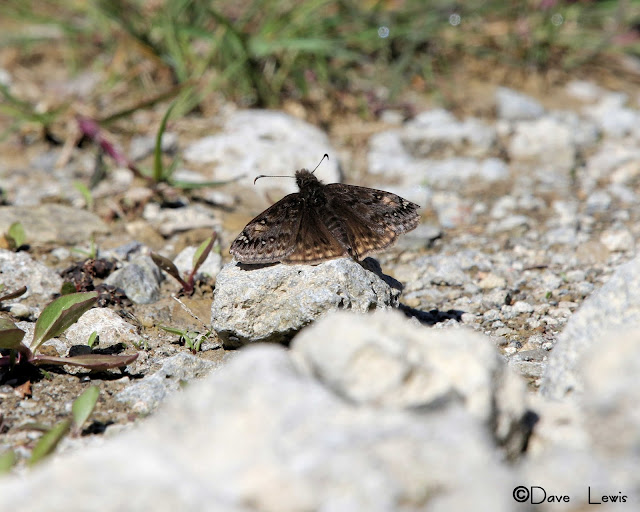 It's finally warming up and the butterflies are everywhere looking for nectar!
This Juvenal's Duskywing is a new species for me!
I only wish I had my macro lens with me... 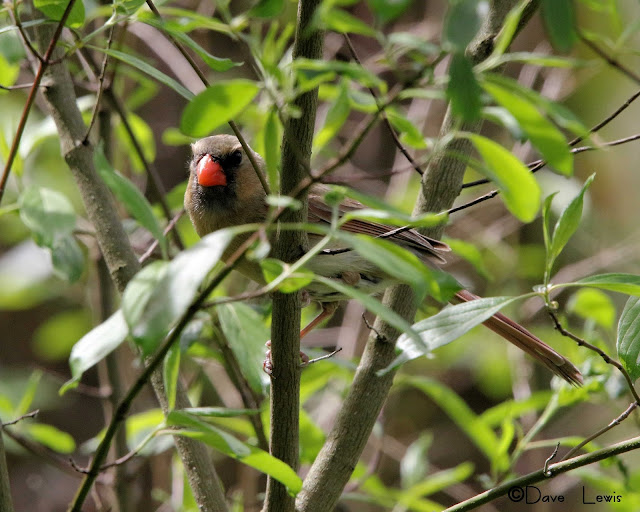 Though without my trusty telephoto I never would have been able to get this shot of a female Northern Cardinal!
They don't like anyone getting close to them. 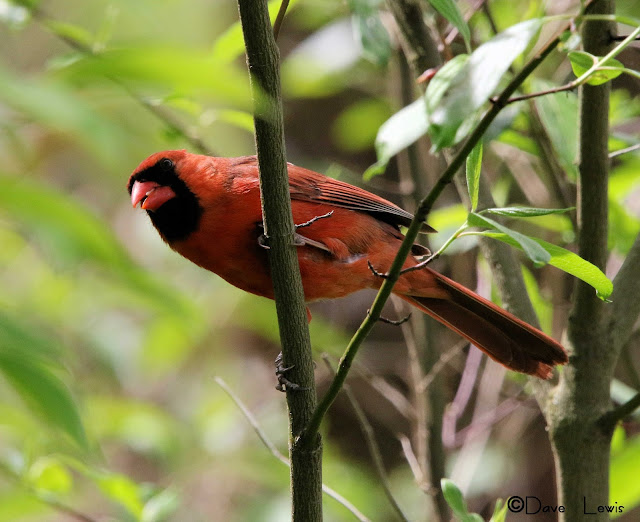 The male popped out between me and his wife and gave me a stern talking to.
I apologized for the inconvenience and left them in peace. 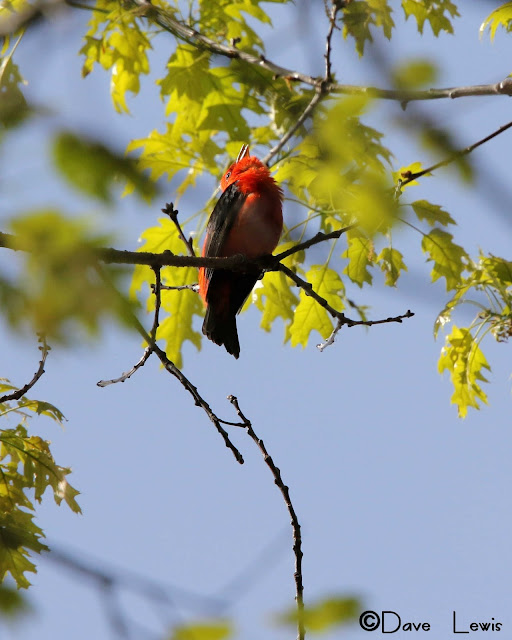 This park has more Scarlet Tanagers than I have seen anywhere!
Lots of singing and serenading in the sun.
I hope the ladies were listening. 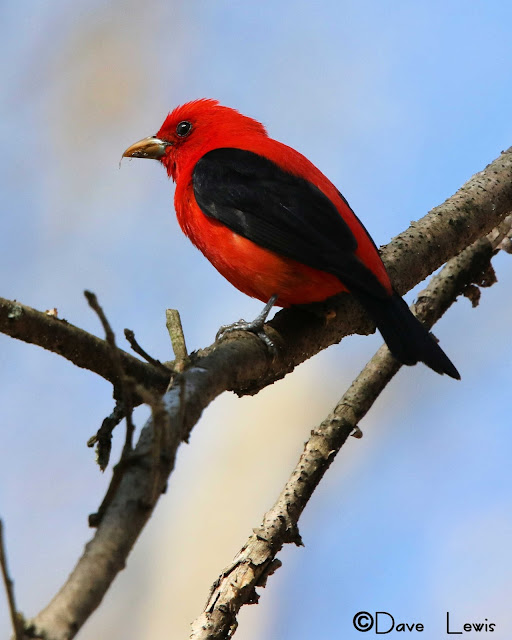 Even a colorblind guy like me can see this red in the warm rays of the sun! 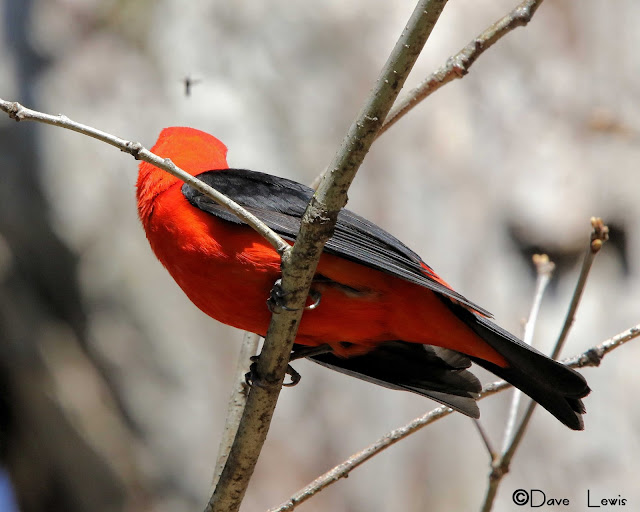 See that little speck just above his head?
He was in deep concentration, closing in on his wee tiny target. 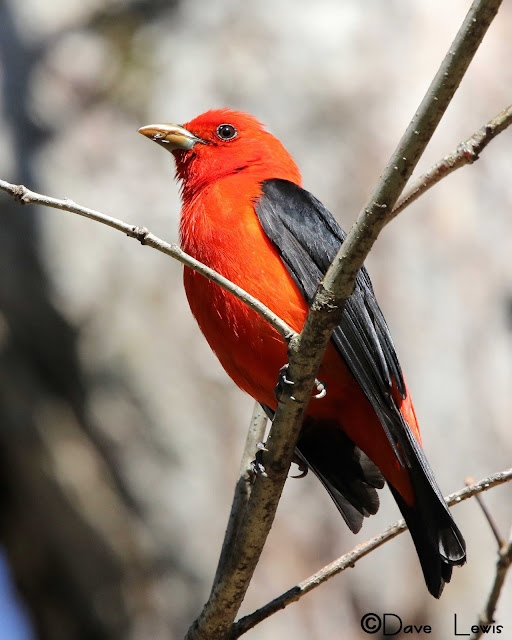 And he caught him...a delightful little snack that reminded me I was ready for lunch too! 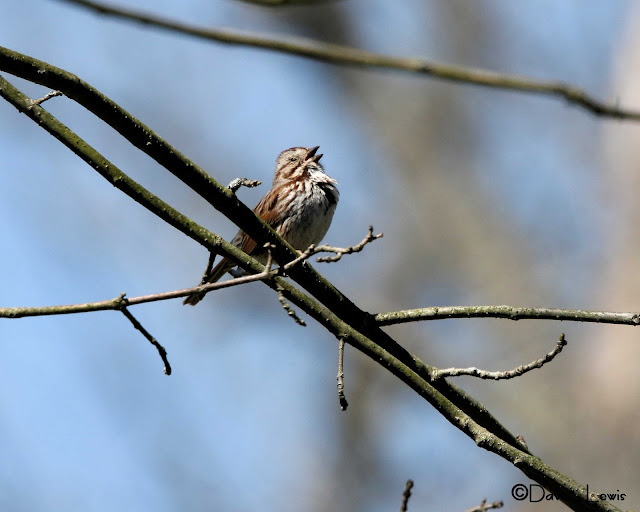 There's always a Song Sparrow belting out a song to lighten your load. 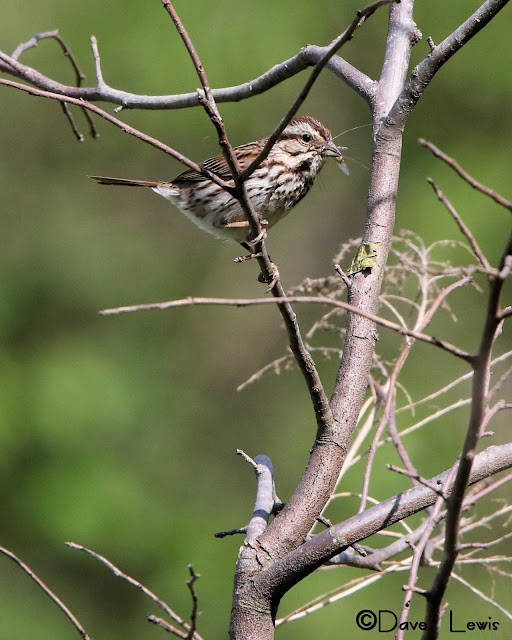 How they can sing so sweetly after downing such an insect is beyond me! 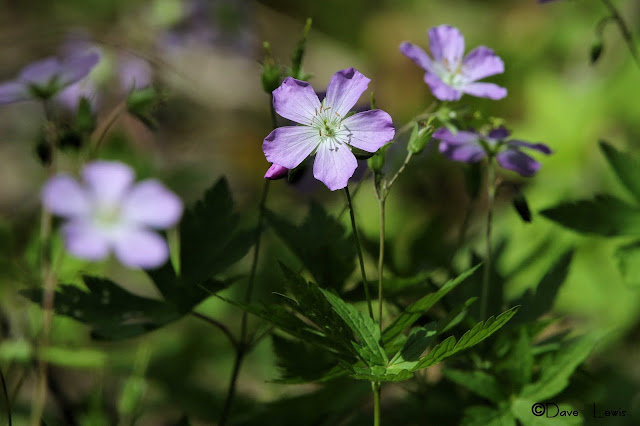 Oh, and the wildflowers are coming up.
I keep forgetting to take a few flower photos too!
So many birds, they distract me.
Speaking of which, there's a Goldfinch serenading me directly out of my window right now!
Life is good! 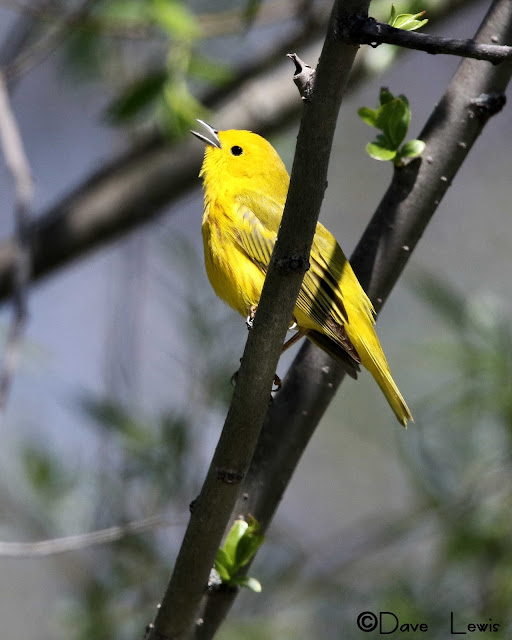 While I sat in the grass eating my samich and chippies, this Yellow Warbly provided a bit of
Opera al Fresco to complete my morning.