We Are Going For a Ride in the WABAC Machine! 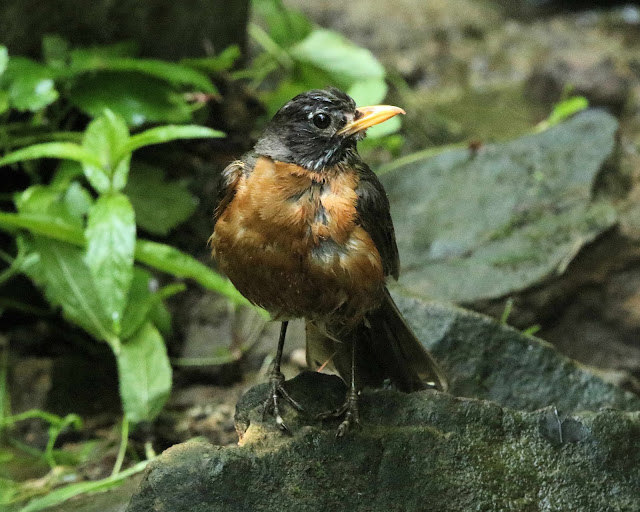 This is not a real Robin if you remember from your recent lesson.
What is it now called children?
Correct!
An Orange-breasted Ground Thrush.
Now tell your friends.

Yeah, yeah I know..."You've fallen WAY behind in your posts!" Get over it. I'm back to annoy you as much as I can...and maybe give you a giggle now and then and help you forget about the morons running this asylum.

We set the date in the way back machine to July 4th, 2018. The day Britain celebrates getting rid of us...or something like that. The place, Brust Park in Munroe Falls. If I remember correctly (ha!) it was quite a hot day and I was surprised that not many people were out. There was a group of teens jumping off of a low bridge into the Cuyahoga River, and I was tempted to join them...but that would make me the weird old man. Or should I say weirder?

Anyway, enough of the wordy stuff... 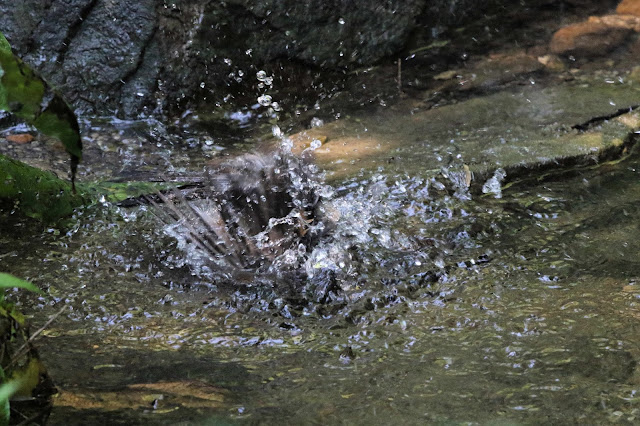 This Orange-breasted Ground Thrush had the right idea! 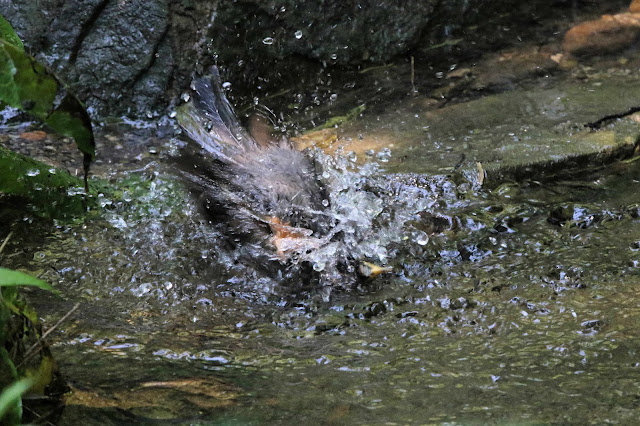 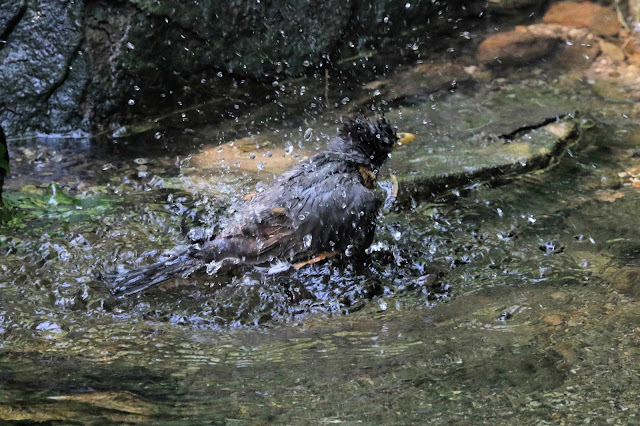 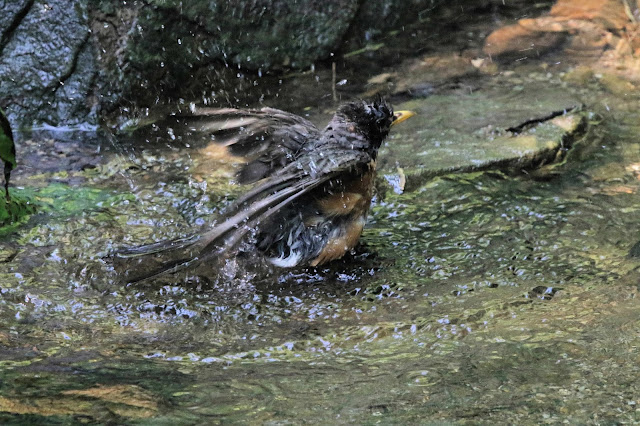 Splish splash! And it wasn't even Saturday night! 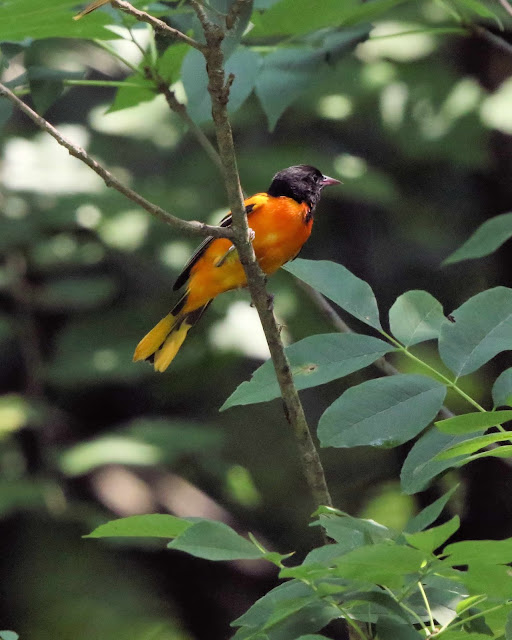 This is still a Baltimore Oriole.
It was named after a baseball team for some odd reason. 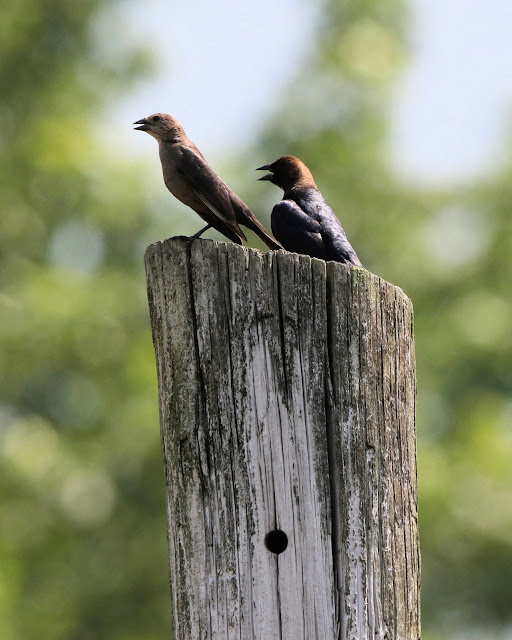 This pair of Brown-headed Cowbirds weren't singing, they were trying to cool down in the heat.
Maybe Cleveland should name their footyball team after them!
Bird names are trendy in sporty sports. 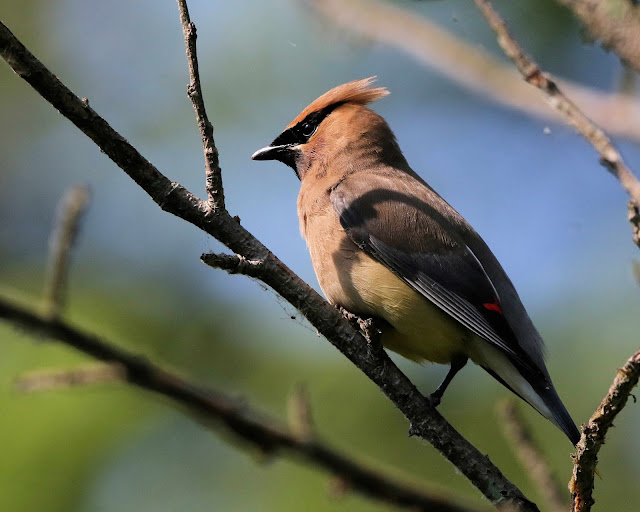 I always have a nice walk in this park. You have to dodge the occasional bicyclist, butt many of the birds enjoy sitting still for portraits, such as this delightful Cedar Waxwing. 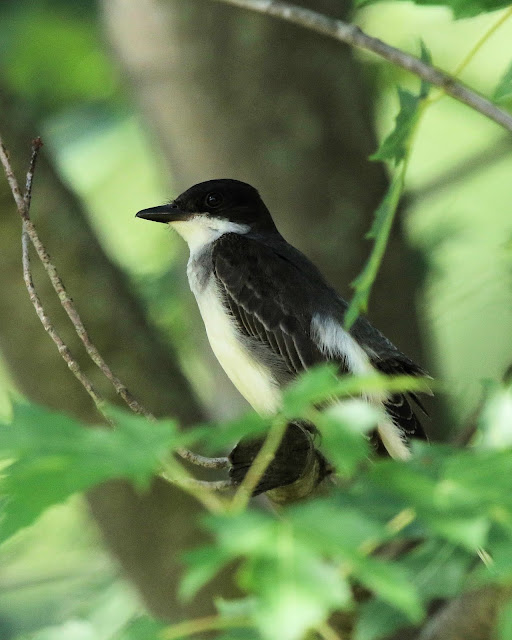 This Eastern Kingbird kept a close eye on me and followed me through the woods around a small pond. (I like being off the trail a lot!) 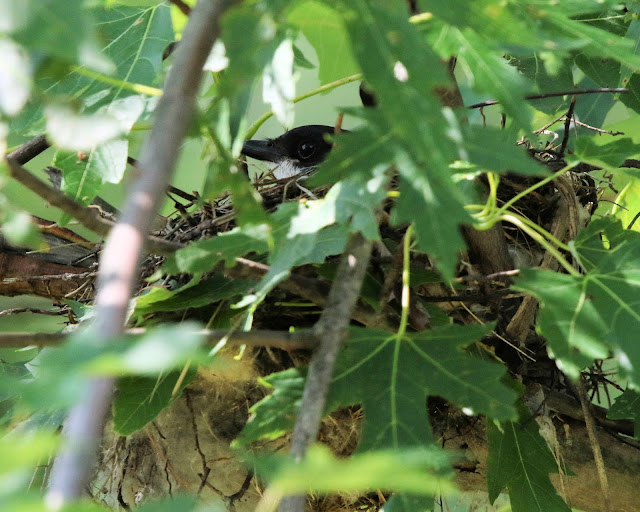 When I arrived at the pond and scanned the trees, I discovered why I was being watched so closely.
He has a family on the nest! 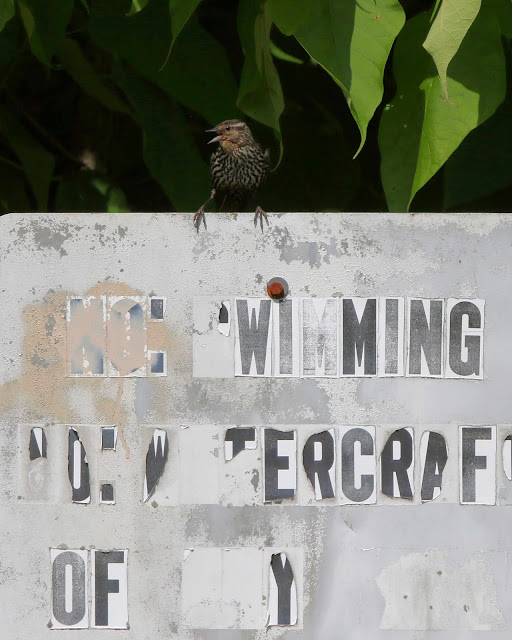 Stoopid Starling was yelling at me to keep my watercraft out of the water.
"And don't even think about swimming!"
Stoopid Starlings are soooo bossy.
I should have asked for his green card.
(That was politically incorrect humor.) 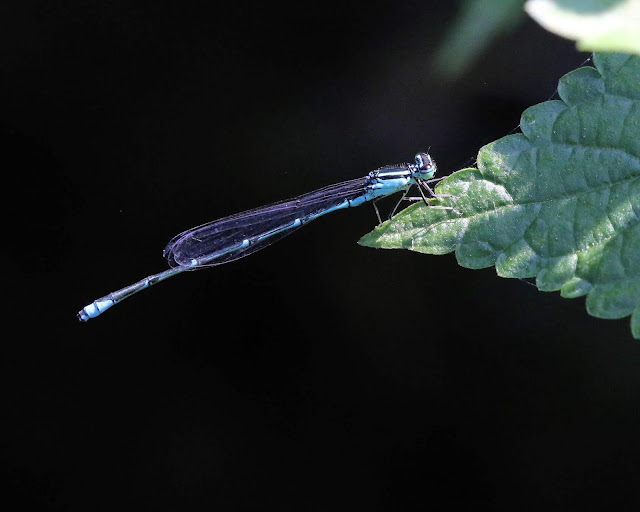 Damselflies confuse more than dragonflies...While not swimming in the pond I saw this Stream Bluet. 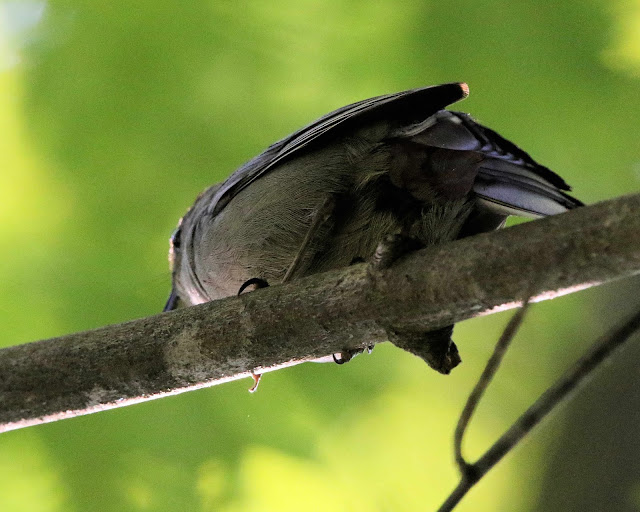 Speaking of Britain...
A Gray Catbird made a visit to England last month.
He must have rode the hurricane winds over. 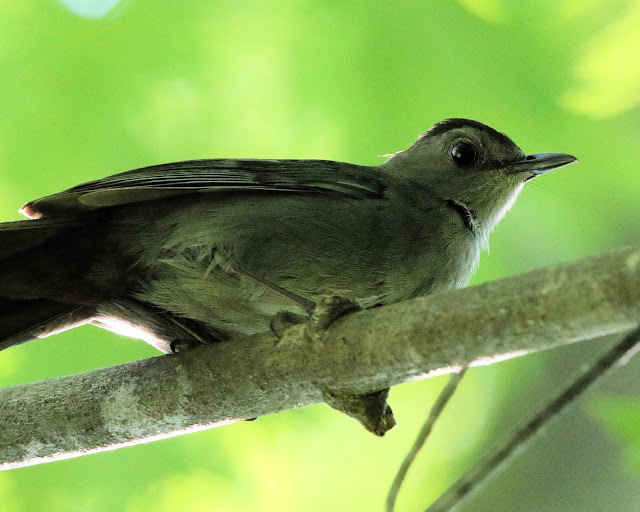 "Wow! I'll bet they mispronounce his name!"
"It's HARRY, not 'ARRY!"
(You see, the catbird call sounds like he's saying Harry. That's a funny joke, You can laugh now.) 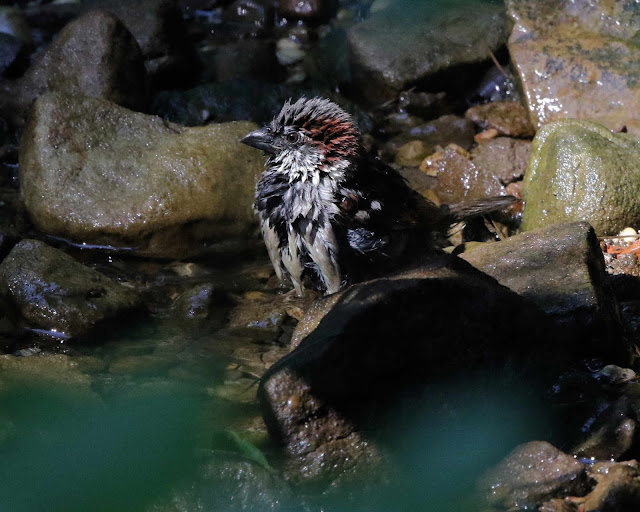 Another British import, the House Sparrow.
He's reminiscing about the punk look... 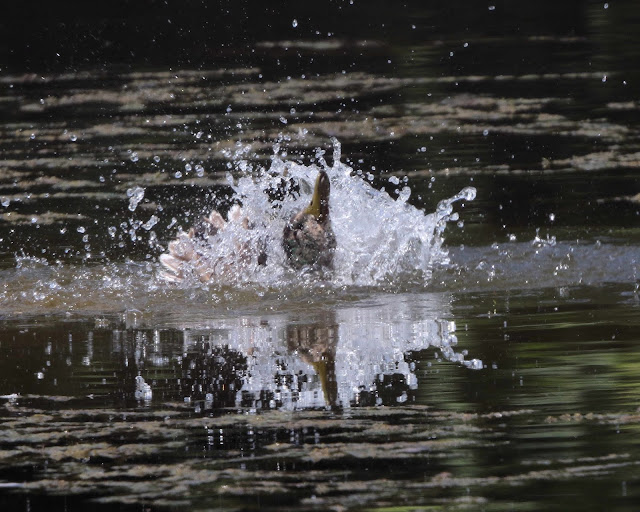 This is now my favorite photo of a Mallard.
And I thought I was the only one that couldn't swim... 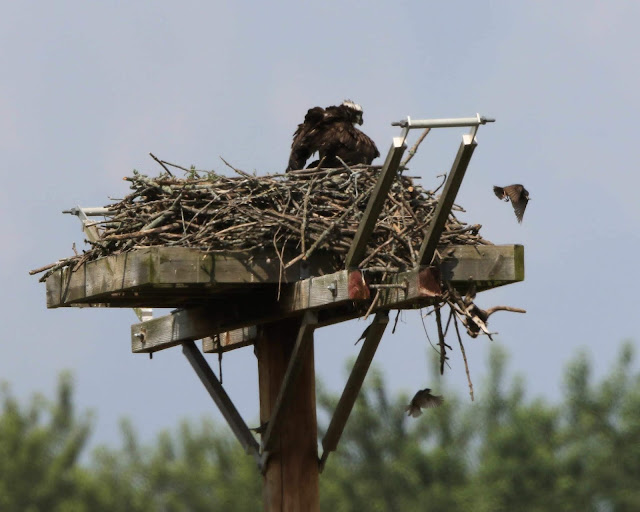 This poor Osprey was losing his nest piece by piece thanks to the Stoopid Starlings and the House Sparrows. 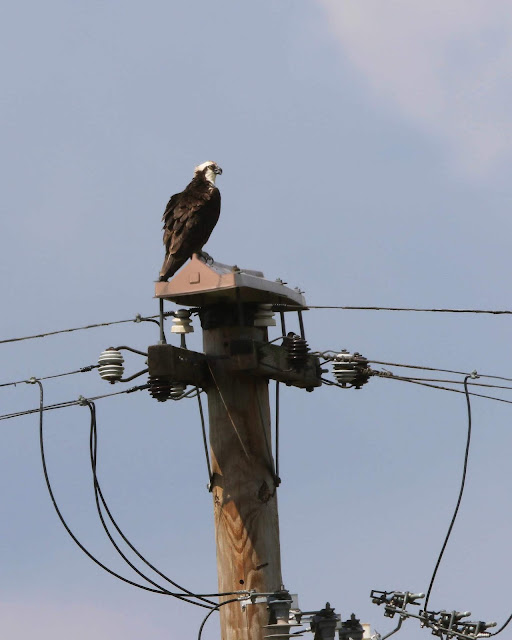 Portrait of a frustrated Osprey. 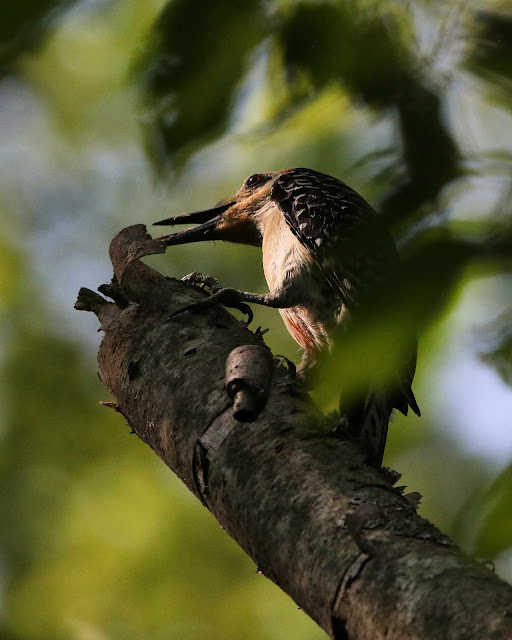 I never noticed the buggy eyes on a Red-bellied Woodpecker before.
Must be all the bugs in their diet...mahahahaha! 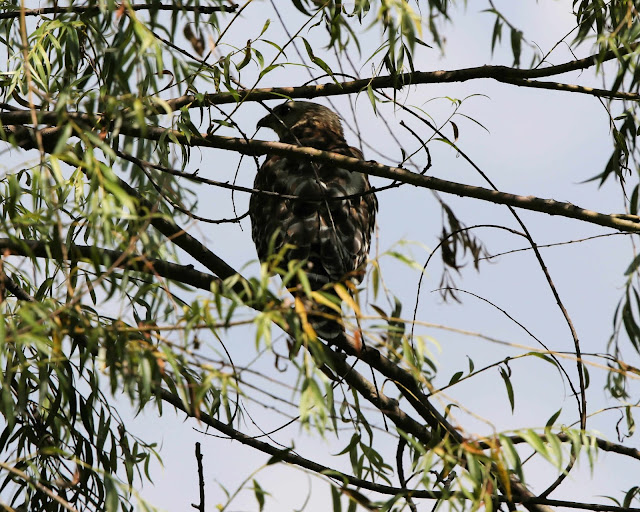 You must appreciate the following photos... 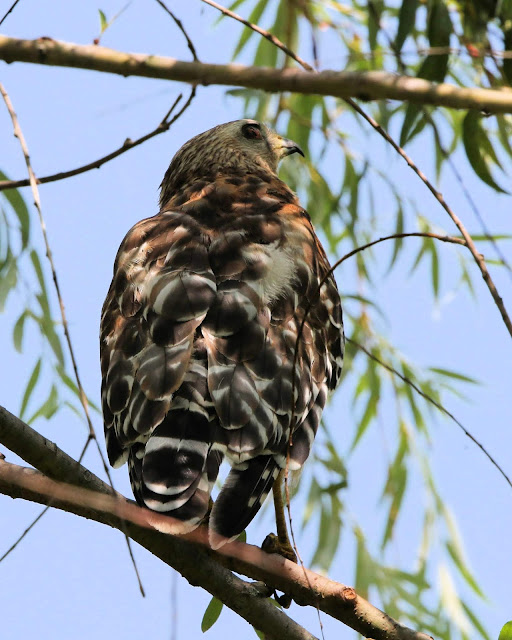 So, I heard a loud commotion in the woods. Dozens of songbirds making a racket.
I wandered in to see what the ruckus was all about...through poison ivy... 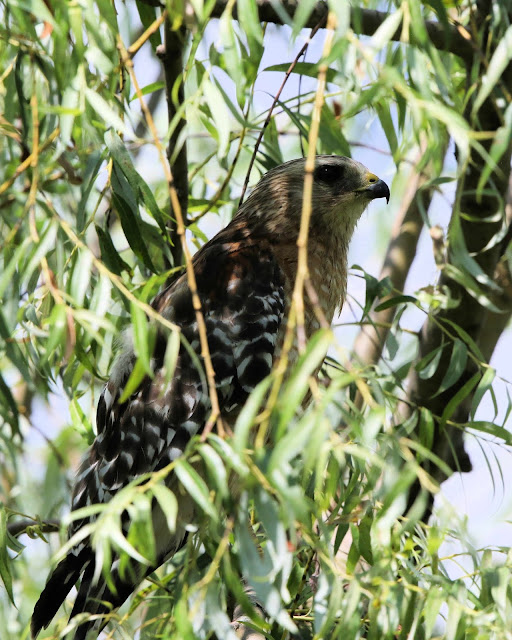 Fortunately my dear readers that were hoping I would be suffering through and insufferable rash and scratching fest, I am not affected by poison ivy, so nyah! 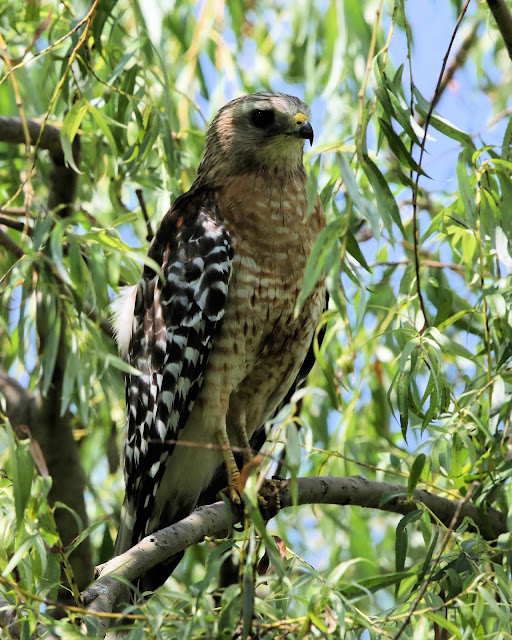 Where was I?
Oh, the ruckus among us...this poor and starving Red-shouldered Hawk was simply minding his own business while trying to eat the face off of one of the aforementioned songbirds and they seemed to take offense  and chased him off.
I followed in quick pursuit to get these lovely photos for your pleasure.
You're welcome. 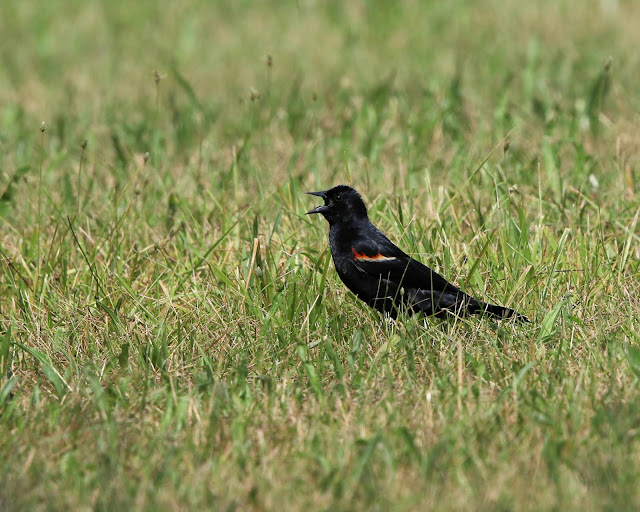 This young Red-winged Blackbird was yelling for his mom because I was following him.
Red-winged Chickenbird. 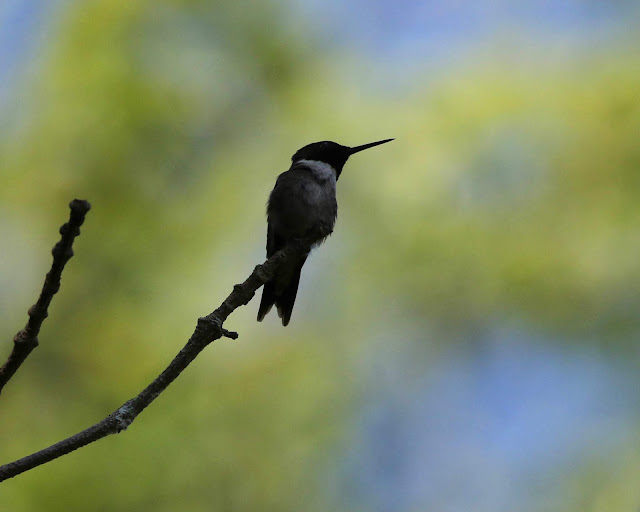 Picture for you to go "Aw..."
A lil Ruby-throated Hummingbird just chillin'. 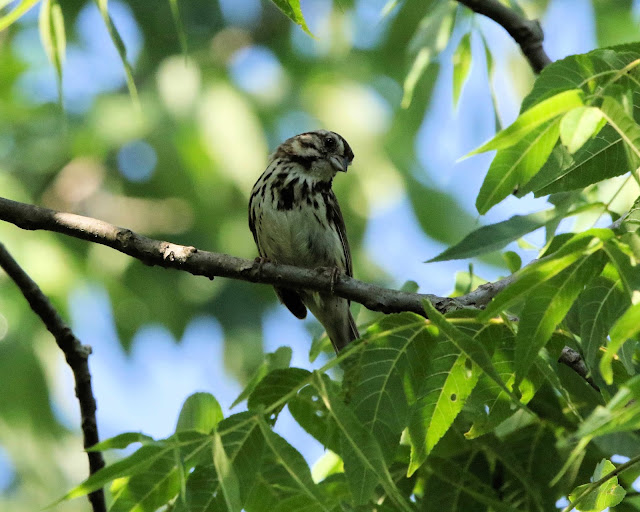 My woodsy wanders would never be complete without my favorite Song Sparrow!

I'm sorry to say, I have many hundreds more photos to make you suffer through until I get caught up...which doesn't look likely...tata for now!