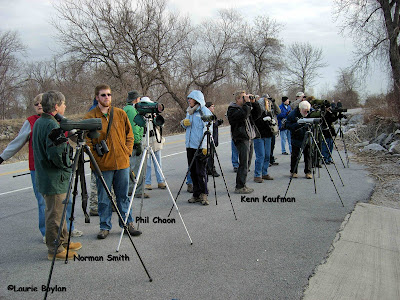 What a great weekend!
Kim Kaufman and all the folks at the Black Swamp Bird Observatory really went all out to have a great time prepared for all of their supporters. Friday night started out at Mango Mama's in Port Clinton with a performance by 6-7-8-OH, the rock band featuring Kim as vocalist and, hold on, 'Killer' Kenn Kaufman on bass. Yep, not only great birders, humanitarians and all around good people, but outstanding rockers, who'd a thunk it! 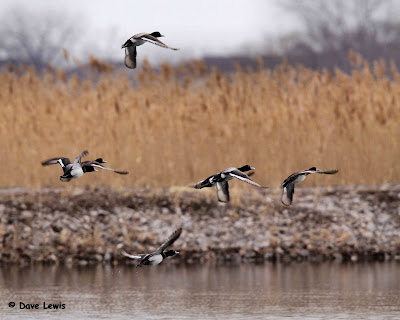 Lesser Scaup doing what birds do when I'm around. This is why I have so many butt shots. 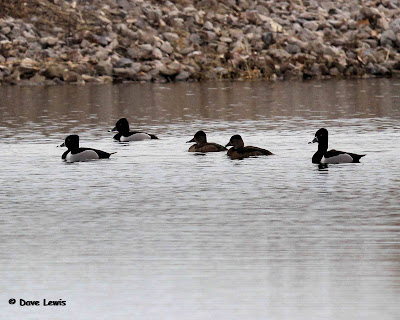 Saturday started with a little (cold) morning birding followed by a presentation by Kenn on identifying waterfowl, a perfect subject for this area on the shores of the gorgeous Lake Erie. He had great hints for remembering head shapes and wing patterns among others. Now, if only I can remember all that info when I'm out in the chilly air staring down those ducks! 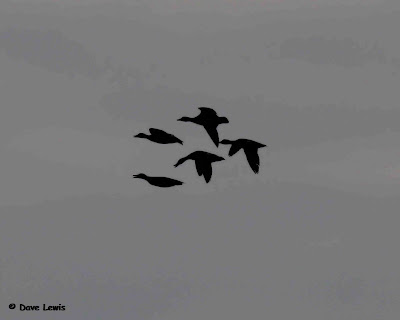 Gadwall flying off into the cloudy skies. Can you tell I was playing with the photo program?

We later took a walk around town and had a little lunch, then drove out to BSBO's "world headquarters" to say hello and bird at Magee Marsh State Wildlife Preserve. After a brisk hike and bit of duck watching, we were ready for another fine meal. The highlight of the evening was the banquet with Kim and her great sense of humor outlining the previous year's many accomplishments and goals for the future. Awards were given out to a few volunteers including Mark Shieldcastle, bird bander extraordinaire, for all of the research he has done for BSBO.

Here's Mark showing us a Wilson's Warbler caught and banded at the Navarre Banding Station. One of thousands of birds he's banded in his career, which includes everything from warblers to Bald Eagles.

After our dinner, which was very good, other than the fact that they ran out of chocolate cake before I got in line (I'll remember that Kim!), Norman Smith of Massachusetts Audubon, gave an excellent and humorous talk on banding raptors, and Snowy Owls in particular, at Logan International Airport in Boston. You really need to go to his site to see all the work he has done. What an amazing man. He got his children started as his 'assistants' when they were two years old. The photos he has of his little ones growing up, holding raptors and owls and helping him keep an open mind about where and how to band birds are fantastic! 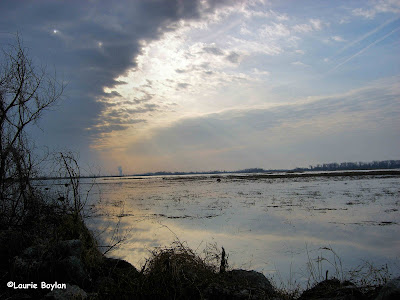 Laurie-loo's beautiful photo of Metzger Marsh. It was, indeed, a very overcast and chilly day. Good for ducks though! 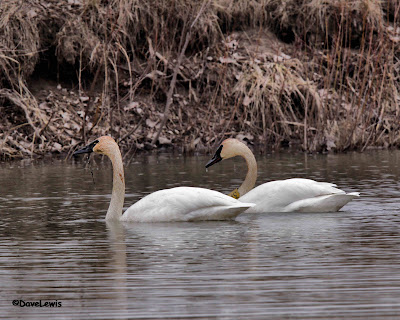 A pair of Trumpeter Swans, one with a tag which I reported to reportband.gov.

They also had a silent auction which raised a considerable sum to benefit the Observatory. They had a great variety of bird related items INCLUDING, a signed, matted AND framed ORIGINAL photograph of a mother and baby Wood Duck by yours truly. Humble, aren't I... 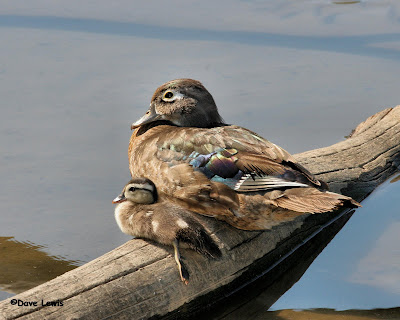 I was happy to help out as they are a very deserving group, a little silly maybe, but deserving! And I look forward to spending more time with them this year.