Loopy and the Doodles in...

The Mistake by the Lake!
Photo number one...emailed...
So, there we are, me, the Doodles and Hudy driving through Ottawa National Wildlife Refuge in my happy little bird car...looking for birds. When all of a sudden, Judy (aka Hudy) perks up and calls out that one of the three gulls she sees has a black head, and I don't mean acne!

Now this time of year on the shores of Lake Erie, one does not see black headed gulls, and if you do, something exciting is about to happen. After I hear her sighting, and being the spry fellow that I am, I burst forth from the vehicle, camera in hand to capture this odd bird in our gray sky.

I get off a couple of shots before it flies off into the murkiness of foggy Lake Erie. When we return to the warm comfort of the Black Swamp Bird Observatory we share our sightings of this mysterious visitor. BSBO is a-buzz!

Later that evening, among a number of guests at the abode of the Hudy's, the gull was the center of discussion. many field guides were consulted. Paul Baicich, Judy, Hugh, Rene and myself, all puzzling over this strange traveller from a distant land. Many gulls were named...Franklin's Gull...Laughing Gull...Franklin's Gull again...could this be it? I pointed out a common gull in my Sibley's guide, no silly boy, everyone was dreaming big! Something important had arrived on the North Coast and we needed to make a positive id!

When in doubt, send photos to an expert...who do we know close by that is an expert? Maybe Kimmay will know who to contact! She tells us there's this guy named Kenn, he's pretty good with odd birds! After many long attempts at emailing my photos from an unfamiliar computing station...success! Now to wait... 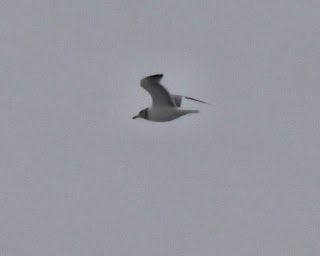 I received the answer the following morning...I opened the email...slowly..cautiously...reading the details of the proper identification of a gull by a professional...going step by step from bill to butt...colors...hmmm...patterns...hmmm...primaries...yep...secondaries...dromedaries...wha?
It was...a...a...a...
...Stoopid Herring Gull with odd markings. Nothing exciting on the North Coast after all. Nothing to post on the list serve. Nothing to write an article about and become famous. Nutz.
Sorry I wasted your time with this blog, but boy did I have fun!
We did see a few other birds out in the freezing weather. You'll have to wait a little longer to see those! Thanks!
Posted by Dave at 9:28 PM