My guest blogger tonight!:
Laurie-Loo!
(...and this is the shortened version...ed.)
Yesterday morning started out with a normal, uneventful bus ride to my job in downtown Cleveland. But then, when the bus was near 12th Street and Superior, I thought I must be seeing things!! I thought I caught a glimpse of an American Woodcock (aka Timberdoodle) running across the road towards a parked car!?!? 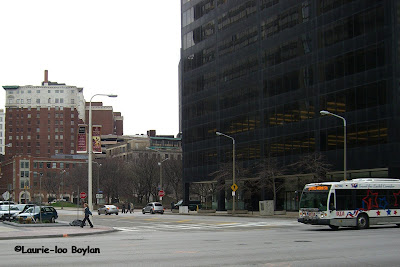 Scene of the "alleged" Timberdoodle sighting, taken one day later.

The adrenaline was pumping, the bird blood was a-Boylan...so I screamed "STOP THE BUS!" (not really)...then I jumped off at the next stop and RAN back to investigate (she doesn't normally run, ed.). As I approached my destination, a policeman who had previously been busy ticketing cars, was now trying to ARREST the Timberdoodle, as it ran in circles. But I held HIM up, and told the officer the strange creature would do him no harm. Other passersby curiously watched the scene unfold, and I took advantage of the time to teach them about this bird. 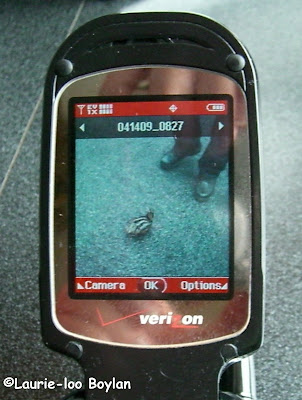 My one evidence photo. Please note the policeman's feet!

Luckily, I had a camera on my cell phone (which she doesn't know how to use, ed.). Out of twenty or so photos, only one turned out (and one video...huh...ed.). Oh happy day, I had my evidence.

DOODLEBOOTY! Now you didn't think I would let her blog all by herself without me adding one of my butt shots did you? This was taken at Crane Creek along the boardwalk.

The bird looked healthy, and I was worried he would run into the street again- so I told the policeman we had to DO SOMETHING! He very gently told me "Lady you need to let nature take its course"- so I then asked him to help me change the course of nature. He then helped me to herd the bird into a nearby city park.

I think the officer was happy to see me go after that.

I returned to the scene of the Doodle an hour later to try and show a co-worker the bird, but no bird was to be found. So in Laurie-land, he happily flew off on his merry way to doodle on some timbers.


Dave says: When we figure out how to get this pic and video off the phone, we'll post them for your edification...and you thought I was the silly one.
Posted by Dave at 8:59 PM