The Tail of a new life bird... 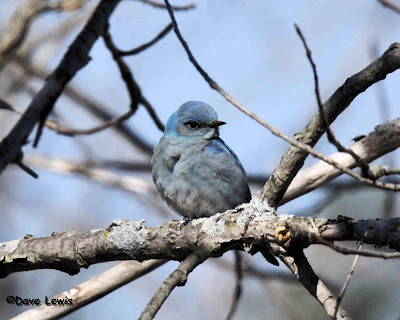 This is NOT the Eastern Bluebird we are used to seeing around here!
We heard about a Mountain Bluebird that had been in the Toledo area for the past week. Our luck with chasing birds is about as good as me getting a shot, in focus, of the front of a bird.
We saw the post on Jim McCormac's excellent blog first, then I met up with fellow Kirtland Bird Club members, Henry and Lucas on the boardwalk at Crane Creek Saturday. Henry saw it very near Toledo Express Airport at the Oak Openings Preserve in the Toledo Metroparks where it had been since the 4th of April. We thought, what the heck, first thing Sunday we'll go out and try our luck. It was only a 45 minute drive from the BirdMobile and our friend and neighbor Judy Kolo-Rose came along in the hopes of also seeing this fine little bird.
And he was kind enough to turn around for the traditional "Birds from Behind" shot!

This is the only the second record for the state of Ohio and the first for northwestern Ohio. I think he took a wrong turn on his migration route, but this place looked like a nice place to visit and he had plenty of fans admiring him. 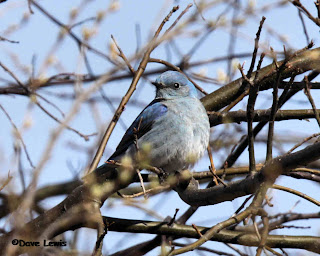 These shots were cropped just a bit, I would have liked to have been closer, but I didn't want to frighten the bird away and ruin the viewing for other birders.

As you can see by the photos, we did, indeed, see the Mountain Bluebird. And I did do the life bird boogie...just for a second. Laurie-loo saw one once before on a visit to Nevada to see her eldest son, Gene. There were a few other birders we bumped into that saw this bird for the first time and they could be seen doing the boogie off in the meadows.
He was singing very faintly after he was done preening himself, which took about forty five minutes. Who's the fussy bird?

And he was right on Sager Road, just like Henry said...thanks Henry!
Posted by Dave at 9:34 PM