The LEAST of my problems... 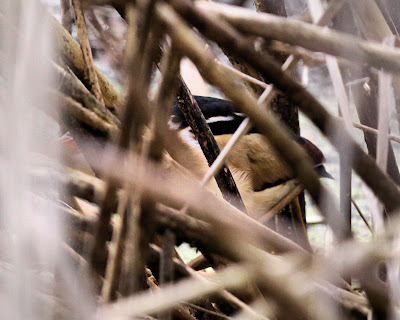 The LEAST amount of a bird behind I've seen in a long time! It's a life booty, baby!
So, As I've mentioned before, me and the Doodles spent the past four days at the Magee Marsh Wildlife Area. We went for the International Migratory Bird Day festivities which included LOTS of birding, junk food and meeting a lot of great birders.
On Saturday, we had a canopy set up near the west end of the boardwalk to sell my prints, note cards and postcards of birds to help raise money and awareness for the Black Swamp Bird Observatory (Hi Kimmay!) I think we did a pretty good job on both counts.
My first day, Friday, Laurie-doodles left me to go birding by myself, silly girl! Along the boardwalk, in between talking to old and new friends and seeing a ba-jillion warbly things, I heard the call of a certain marsh bird. I wasn't positive of who it was until someone let me know exactly what its secret identity was. I looked for the crowd with the seriously concentrated binos pointed towards the reeds and squeezed my skinny self into an area of about four square inches. Boy was that rough on the lens!

Oohs and aahs and life bird dances were plentiful! And there it was, that special booty, the LEAST likely bird you'd expect to see that close. At first I got a glimpse of its eye, then its bill, and finally that glorious little booty! Woo-hoo! Life Booty!! 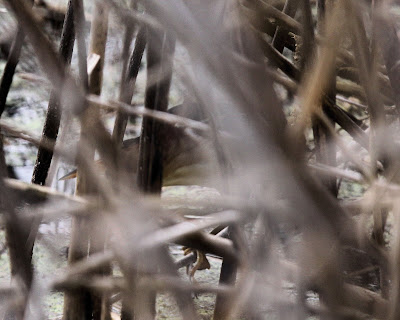 Have you guessed yet?

I must admit, I was rather excited and the pics aren't the greatest, but you try shooting between someone's legs and not get slapped!

I was a happy boy, until the Wrath of Doodle came down upon my sparsely vegetated head. Not a happy girl, nope. Not that we're competitive, it just seems like any time she lets me out of her sight, I get a life bird. We went back three times and could hear him calling, "Yoo-Hoo!", but Laurie-Doodles never saw him...aaawwww, so sad. 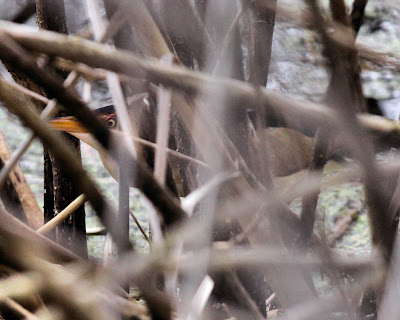 So, I'll bet you guessed LEAST BITTERN, didn't you?

But, enough of the jibber-jabber, SHOW ME THE BIRDS!