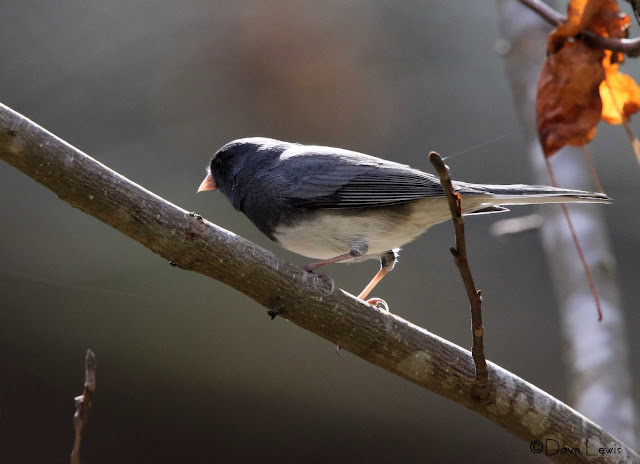 The only bird that sat still this day...a kindly Dark-eyed Junco...and he even faced the right way.

So, where was I? THAT was a good question! Every time I saw a sign with a new states name, I was surprised. I was driving on autopilot, letting my GPS tell me where to go(at least it's polite when it does it!) I'm not good at sitting in a car for more than 3 or 4 hours. Knees cramp up...boredom strikes and I keep seeing signs for parks at the "next" exit...oooo...maybe there's some good birds there!

Brian told me about a state park I should visit that was close to Asheville...Rocky Fork Sate Park. For some reason, I thought being close to Brian's home, this would be in North Carolina(AKA North Cackylacky.) Nope,it was in Tennessee!  I didn't find that out until I arrived back home. Yep, Loopy doesn't always pay attention.

What a great place to stop and stretch! I realize that 1:30 in the afternoon isn't the best time to go birding, but this place was gorgeous. A nice steep trail winding along side Rocky Fork Creek. Very peaceful with the sounds of the creek burbling over the mossy rocks and small waterfalls. I only tripped a few times watching the water...

I only saw the Junco and a fleeing Red-bellied Woodpecker...apparently news of my arrival traveled fast...oh well, back in the BirdMobile to continue the journey... 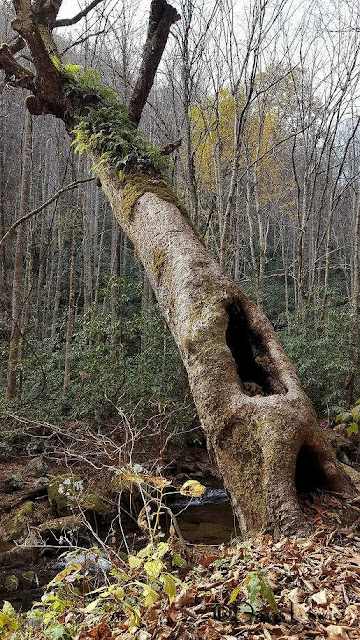 Even the dead trees were interesting to look at.
( this was one of the places I tripped...camera is safe!) 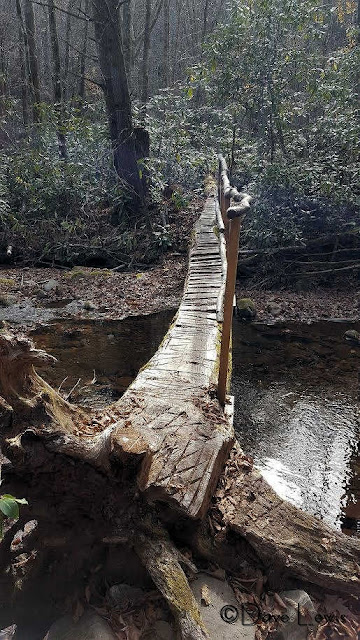 I looked at that bridge a long time...then turned around.
Why push my luck? 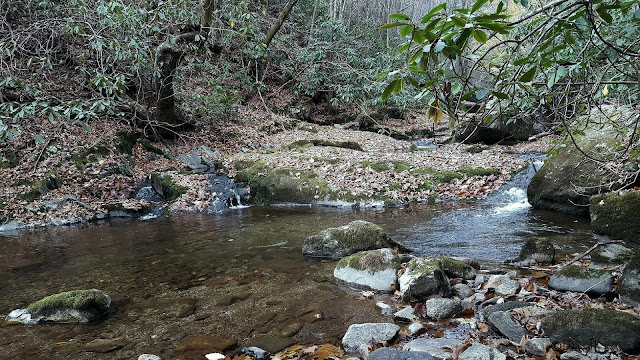 Can you hear the babbling?
...of the brook! Not me! 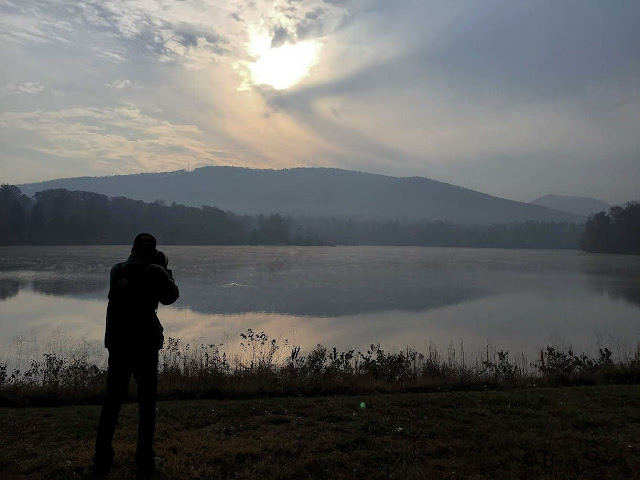 At last, I arrived in Asheville, North Carolina!

They've been in a severe drought for some time now. All that haze is due to forest fires not too far away. Every morning on our bird walk, you could smell the odor of the burning trees and scrub. It was a very disturbing feeling, know that the homes of so many of my woodland and feathered friends were being destroyed. And of course, none of this is due to climate change...my politician buddies told me so and they're smarter than anyone else on Earth....but anyway...where was I?

Oh, Asheville...more precisely, Biltmore Lake. There's a great trail that circles the man-made lake with a few side paths. At one end was a wetland area that will be great to explore in the spring and summer...next time...if I didn't wear out my welcome. Imagine dealing with me for a week? Let alone the more than 13 years I've worked for Brian and Caron...sheesh...I couldn't do it... 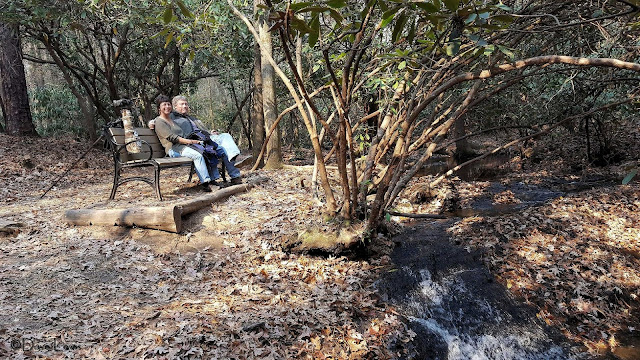 That's my swell hosts at the North Carolina Arboretum...and my camera...
We went for a cruise down the Blue Ridge Parkway and a hike through the arboretum.
I think they were hoping I would fall in the creek...you can tell by the look on Brian's face. 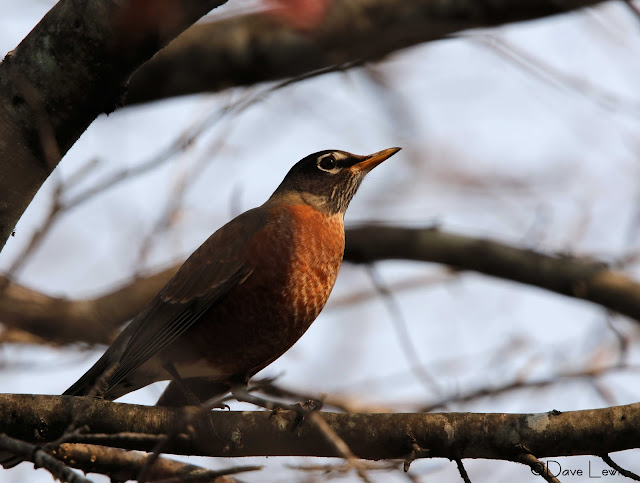 A good ole American Robin.
You can always count on seeing them no matter how lost you may be. 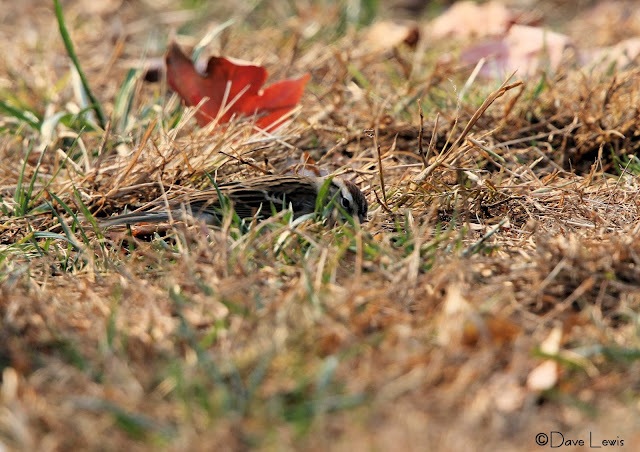 Speaking of lost. This Chipping Sparrow was trying to hide.
I think he was hoping I would get lost and leave him be. 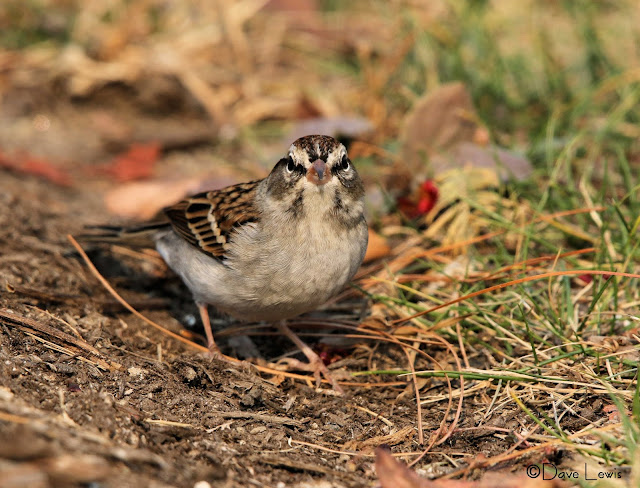 " Don't even think about taking a photo of my butt...y'all!"
Even the birds said "Y'all."
Very odd.
Really. 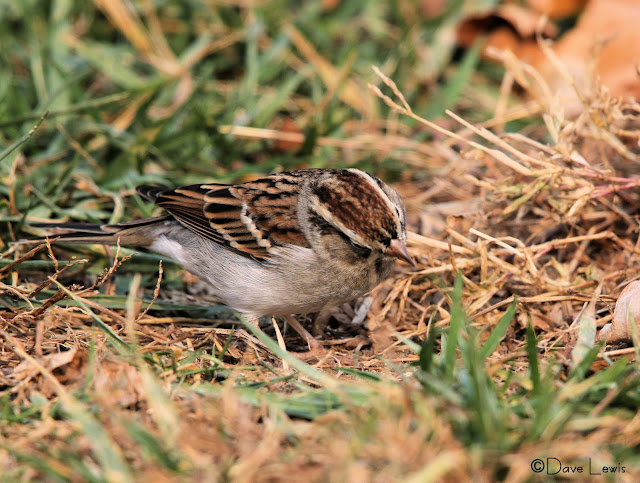 He did let me take of photo of his feathery crown. 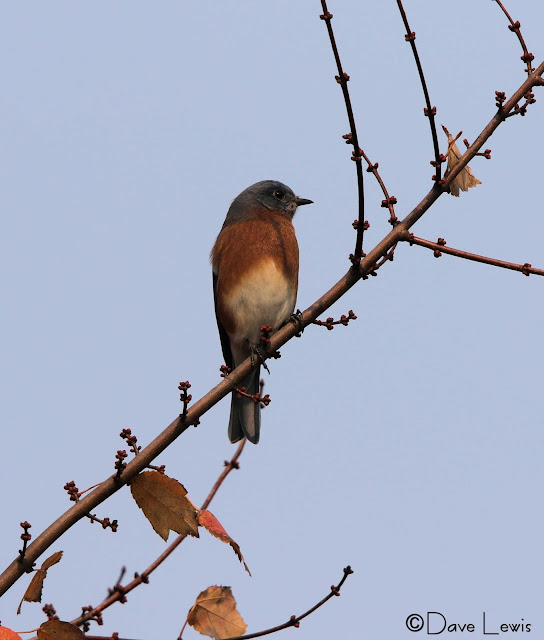 There were dozens of southern Eastern Bluebirds around us! 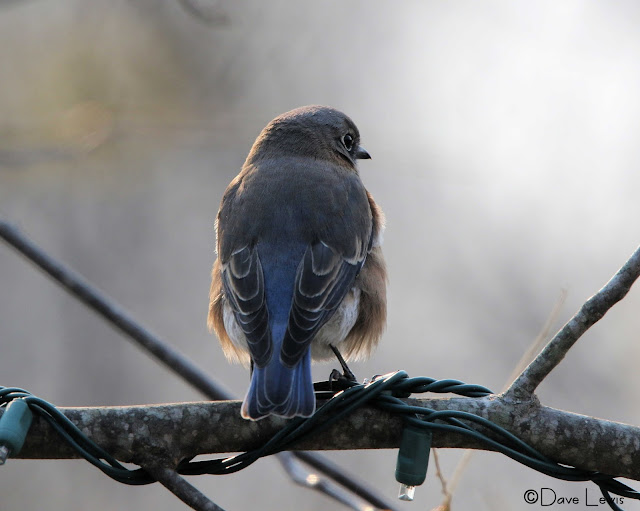 He was nice enough to give me his southern exposure.
Southern hospitality extends to the birds as well! 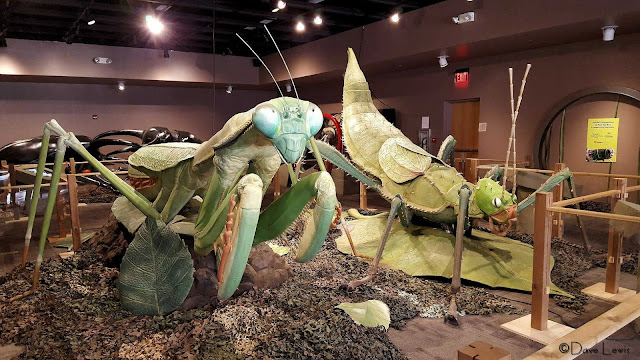 Them thar is some really BIG bugs!
They had a cool display of insects...and they moved!
Nothing like a few scared screaming children to give you a few laughs... 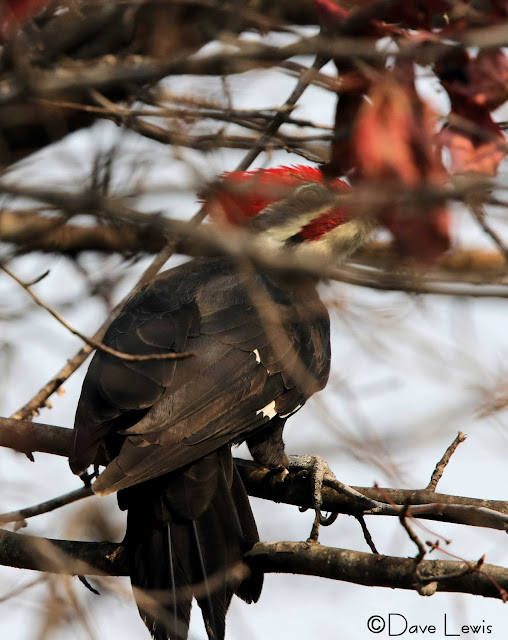 And once again...a Pileated Woodpecker is right in front of me and I almost missed.
Of course all I ended up with was a blurry butt shot.
One day you Pileated! One Day!!! 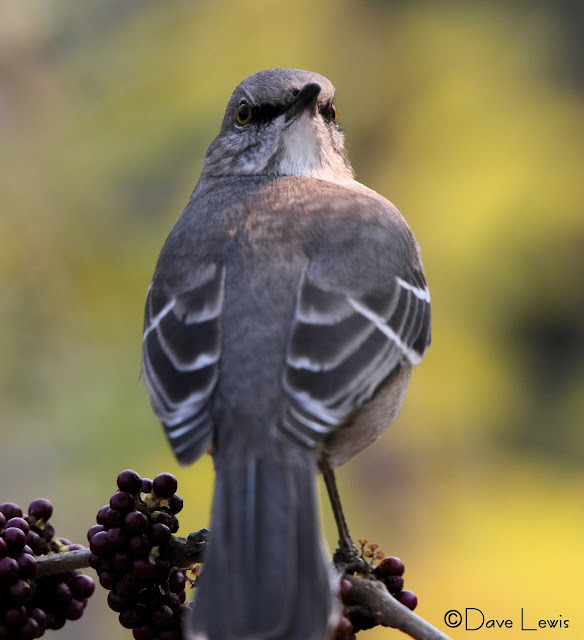 A southern Northern Mockingbird not happy that I was mocking his southern end.
Sorry, I had to. 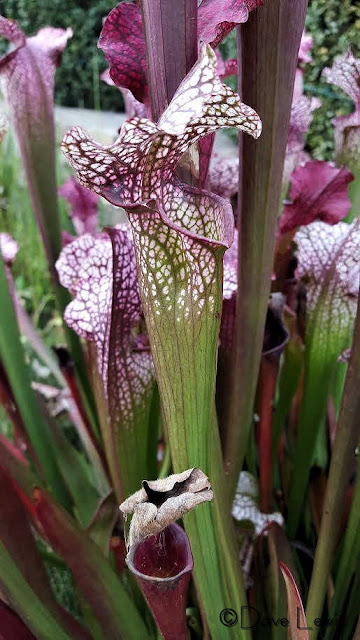 I was so busy looking at birds that I forgot this was an arboretum and I should be taking a few of those botanically type pitchers!
(Get it? It's a PITCHER plant?...No? Oh well. I tried.) 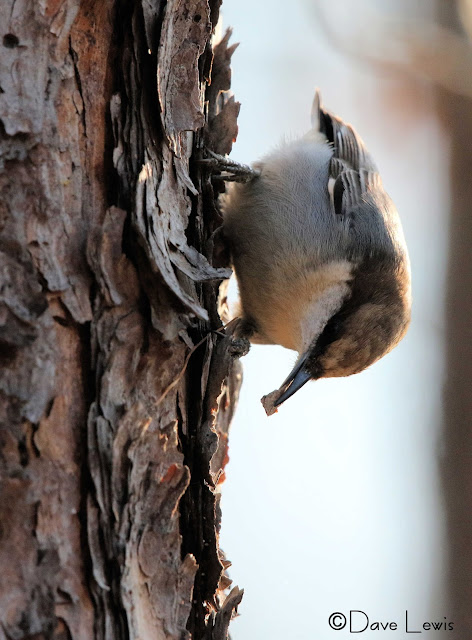 Yes, I even got a life bird bird while visiting my buddies at Biltmore Lake.
More on that next time...as the Adventures in Asheville continues... 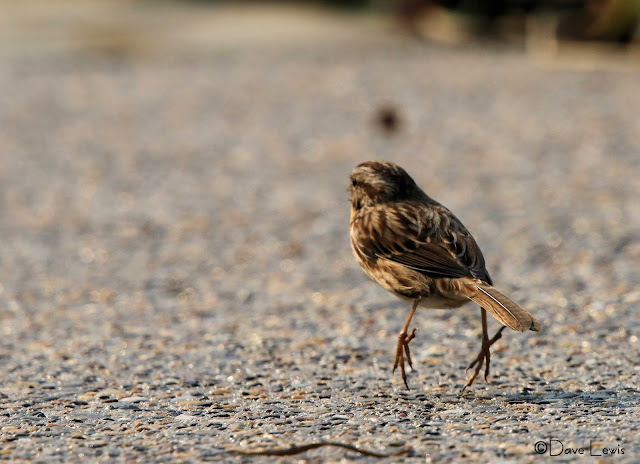