...Meanwhile, Back at Tallmadge Meadows... 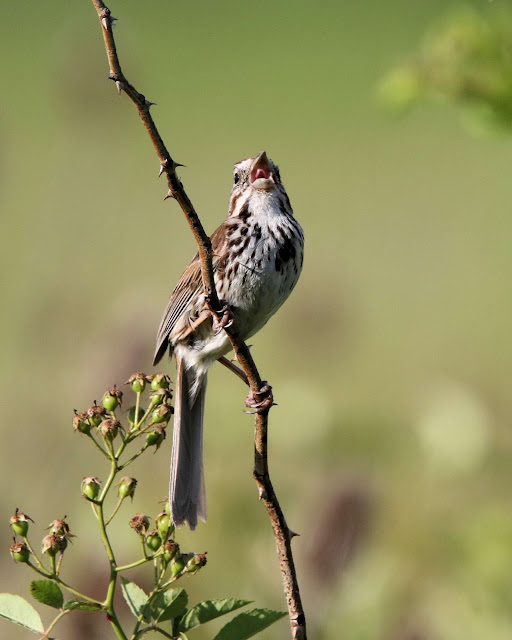 Tallmadge Meadows and Munroe Falls Park are great places to find some nice birds and get a relaxing walk. I usually spend so much time in the meadows that I never have the energy left to hike through the woodland areas...one of these days.

This night after work I didn't see as many flycatchers as in last weeks post. There were still some around, but they seemed to be hiding better or too far away. Oh well...there were a few more exciting finds on this walk!! 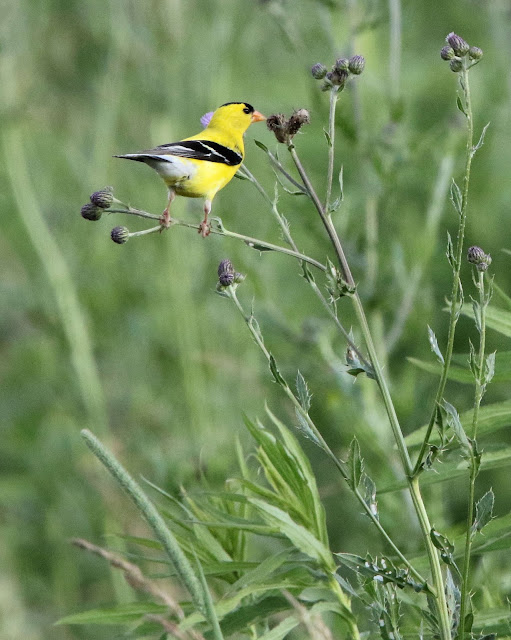 The American Goldfinches were checking out the latest crop of thistle.
There's gonna be babies to feed soon! 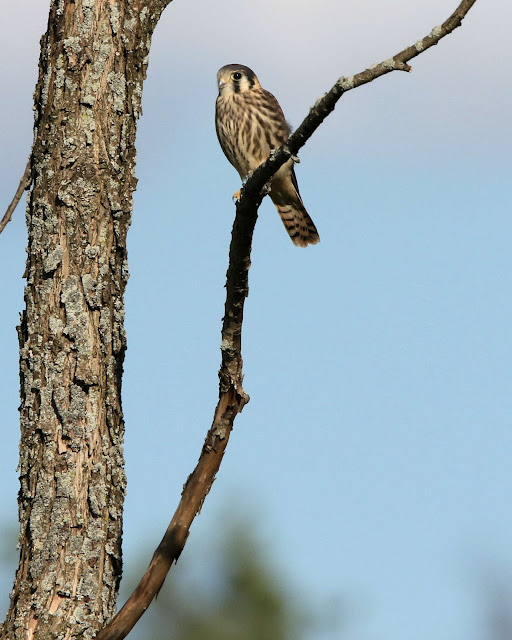 This was one of the exciting finds of the day!
I had no idea American Kestrels could be found here.
I saw this out of the corner of my eye as I was looking at a Song Sparrow(go figure!) 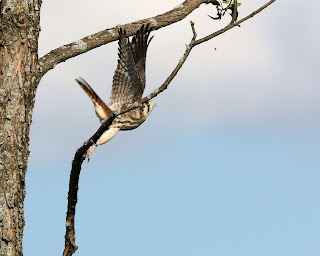 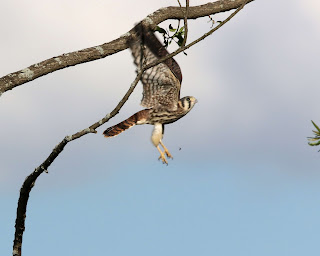 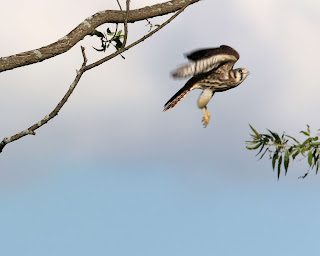 Of course, when you see a bird and stare at it too long, it will leave. 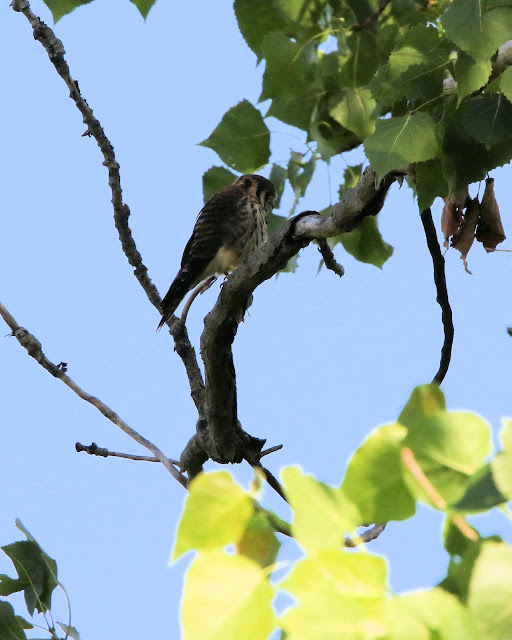 But it flew into a very large tree...and lo and behold! A second Kestrel was tucked away in there! 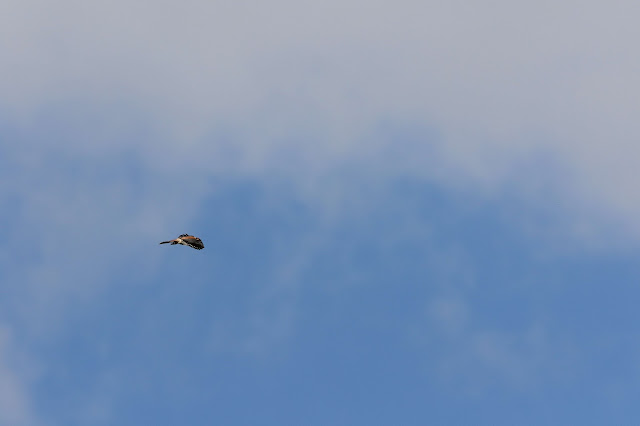 The first finally took off on a hunt around the meadow...then disappeared... 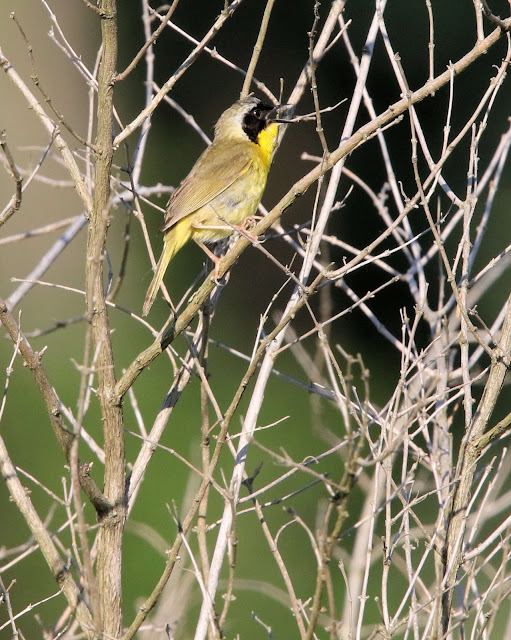 Meanwhile...I snapped back to reality(or what I think of as reality...sort of...) and there was a Common Yellowthroat singing to his special lady friend. 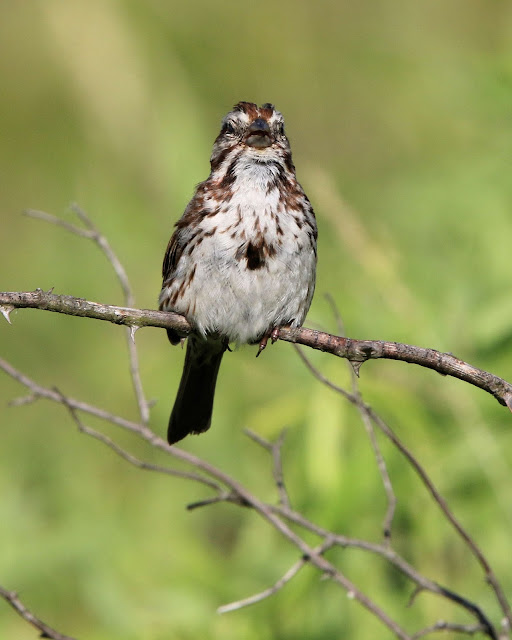 Oh boy! Another Song Sparrow.
This one had a peculiar look about him...bad feather day I think...
He was whistling like he may have been in trouble...
"Toodle-doo...don't look over here...there's nothing to see here..." 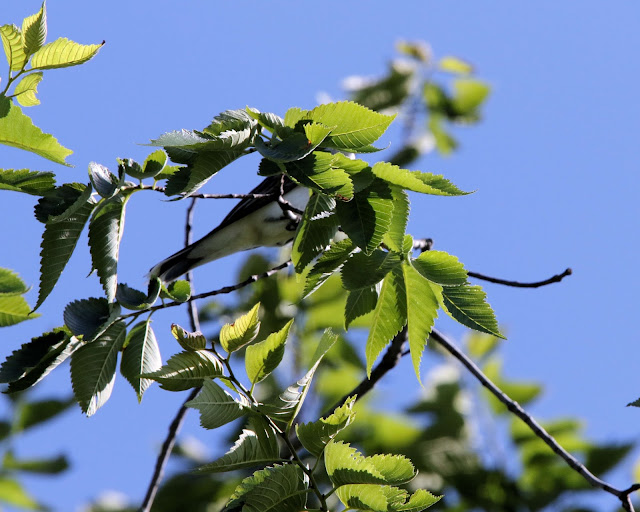 Crappy photo of day!
There's an Eastern Kingbird hiding in that unfocused fuzziness...
Look at the tail...there ya go. 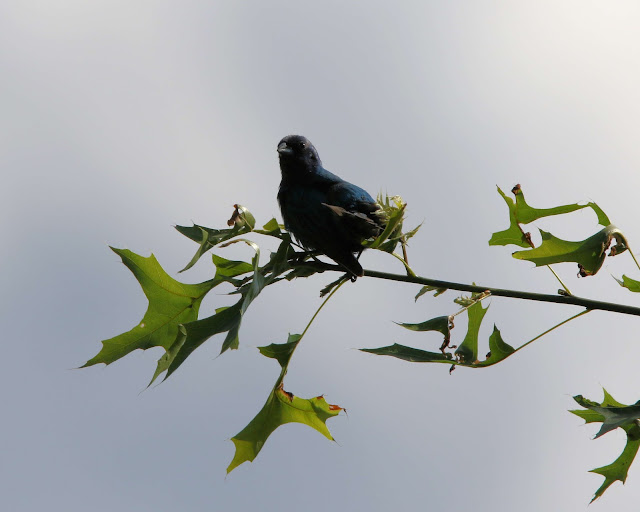 This male Indigo Bunting kept zooming from tree to tree as I was walking past. 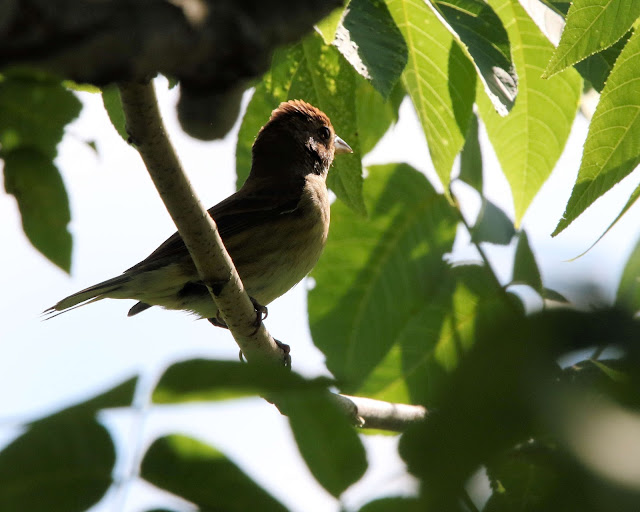 Then I noticed some movement low in a nearby tree.
He was trying to distract me from this female and a nest! 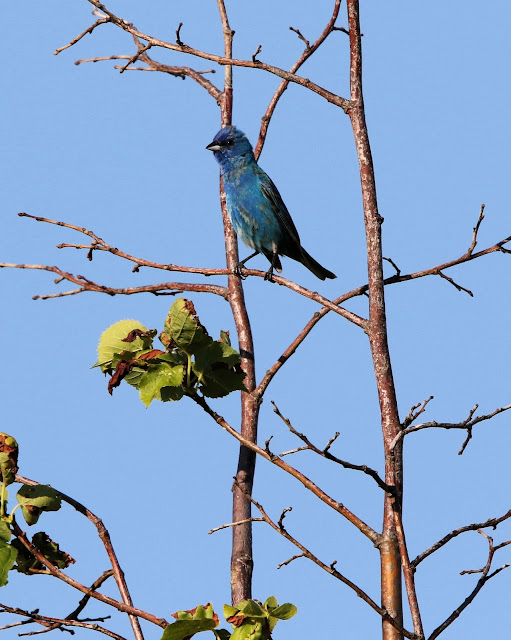 He's keeping tabs on me as I walked away...
"Can't be too safe with these crazy camera people around!"

Getting sick of this photo yet? 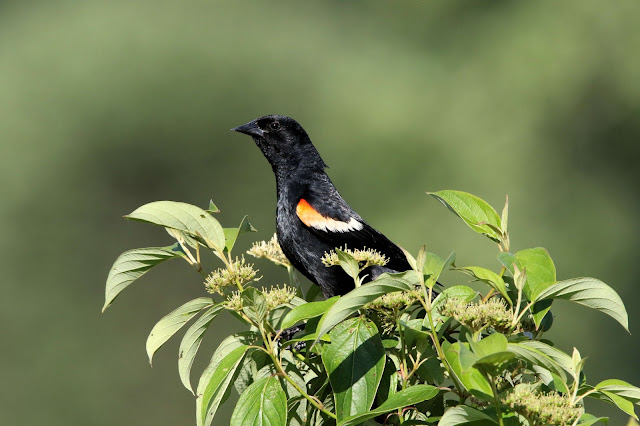 LOTS of Red-winged Blackbirds out there!
Most don't sit still long enough...always zooming around protecting their nest sites.
This guy stuck his neck out to give me the once over... 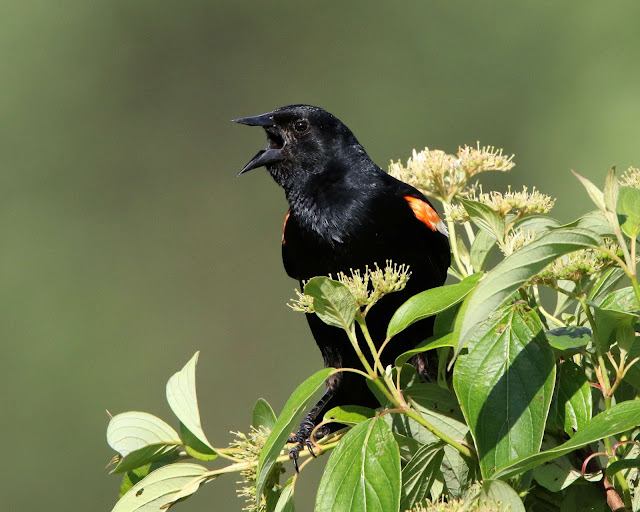 And then he started to yell at me...rude kind of guy... 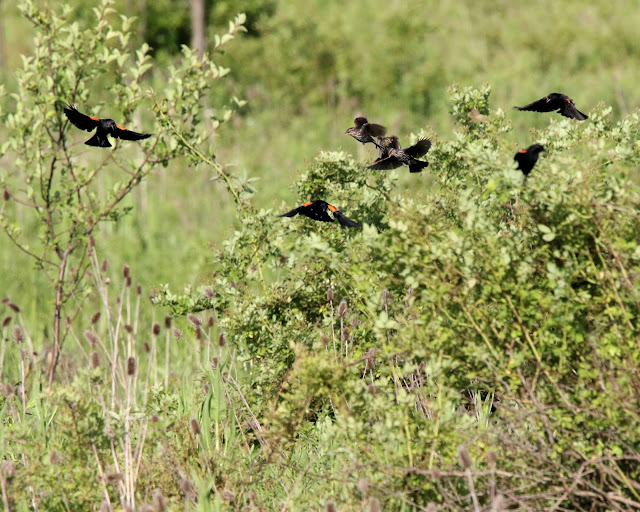 A flock of Red-wings were mobbing this scrubby area...
...must have been something in there that was very annoying! 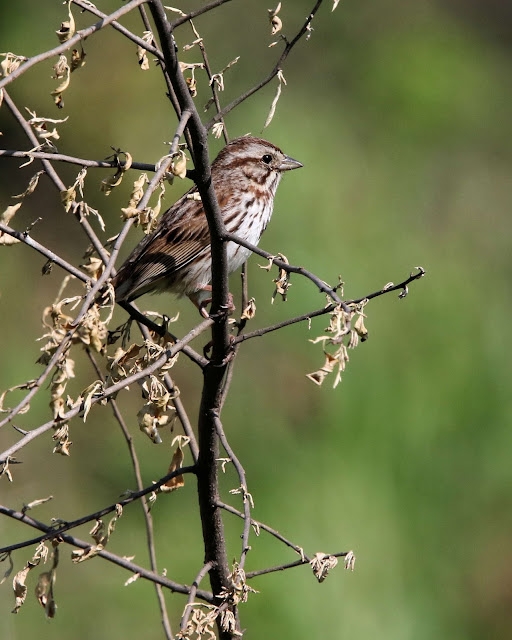 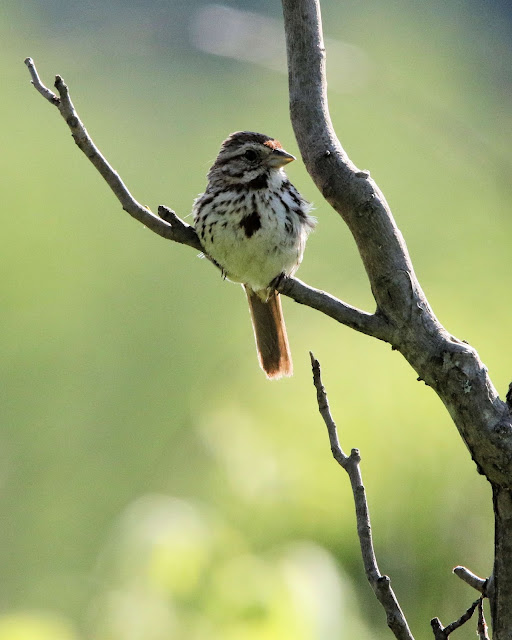 Just think, I didn't post photos of all of the Song Sparrows I saw!
Lucky you! 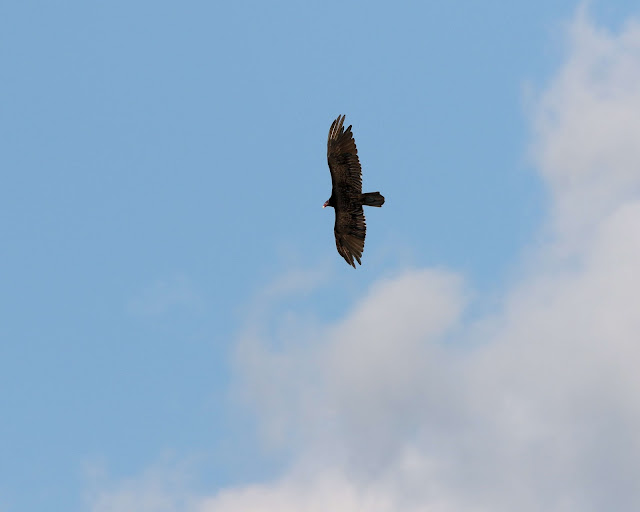 There's always a few Turkey Vultures circling overhead when I'm there.
I wonder if that means something? I better walk faster... 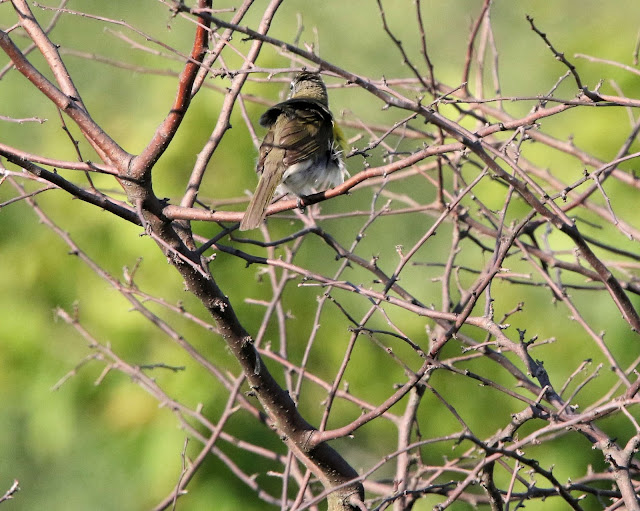 The other surpise of the day was a Yellow-breasted Chat!
I had no idea they sometimes nested there.
There were two males singing back and forth, though I only saw one of them.
Of course I get a butt shot! 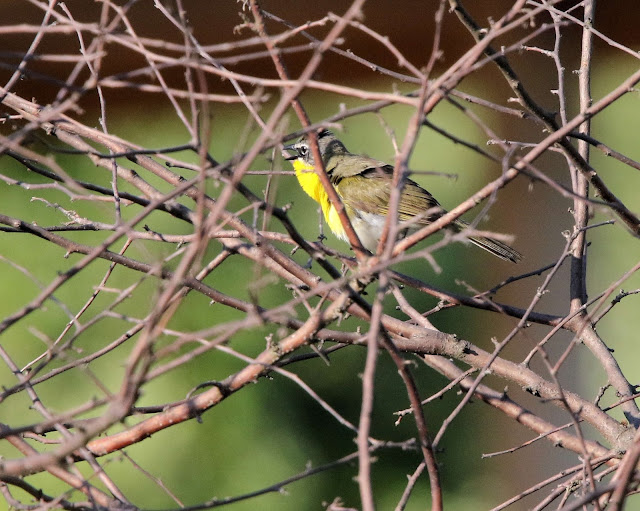 He wouldn't come out of the tangles...I'll have to go back again...maybe he'll come out to play next time... 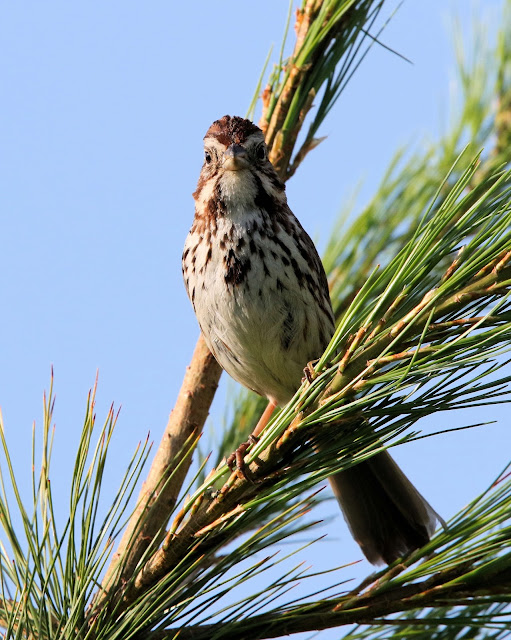 Until next time kiddies! See ya out there somewhere!
Posted by Dave at 11:22 PM