A New Place to Wander! 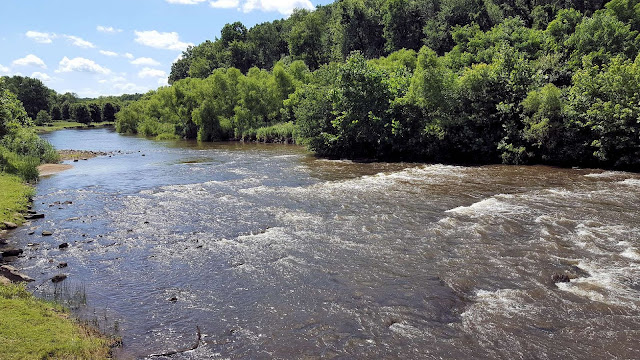 Along the banks of the mighty Cuyahoga River lies Brust Park in Munroe Falls. I've driven past it dozens of times, saw the paved bike path and never gave it a second thought. I don't like walking near bikes after getting run off the trail a number of times. The last time I was at Tallmadge Meadows(see my last post) I was speaking with a volunteer from Summit Metroparks and she mentioned the path along the river. If I walked far enough I would find a pair of nesting Osprey! That piqued my curiosity!

So off I went...and what a surprise this place was! 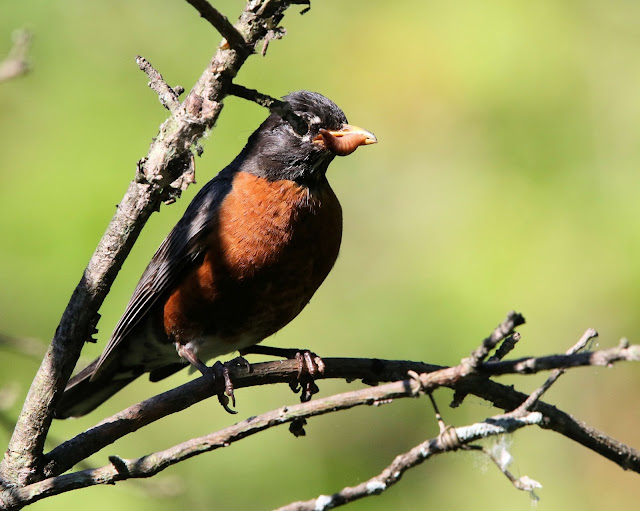 This American Robin was the first bird I spotted...I thought that grub was going to attack him!

Not very far down the trail, under the Route 91 and along the river is a clump of trees...and what treasures they held! I stood in awe of everything that was zooming in and out! a fire station is right across from here, they were all bust cleaning the vehicles while I stood, shooting almost non-stop for at least an hour!
Here's a few of what I saw before I decided to get out of the sun and travel a little further... 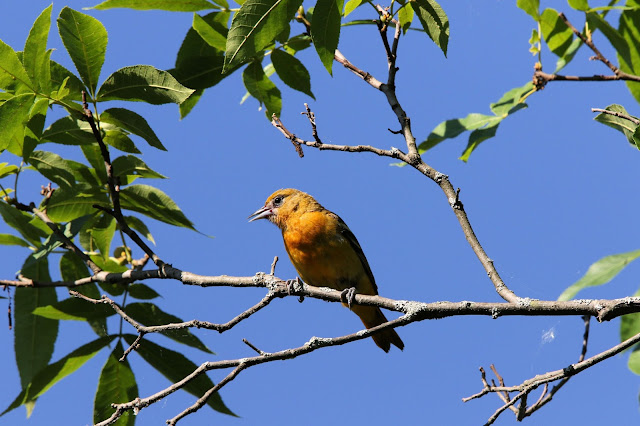 The Baltimore Orioles were very noisy!
This female must have seen a threat nearby...me?...nah. 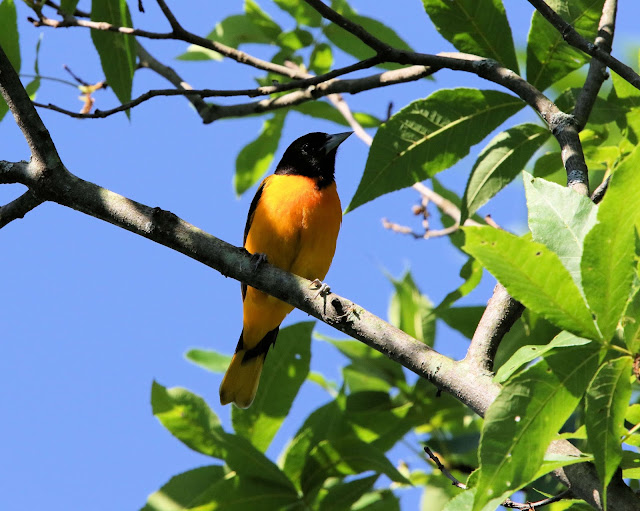 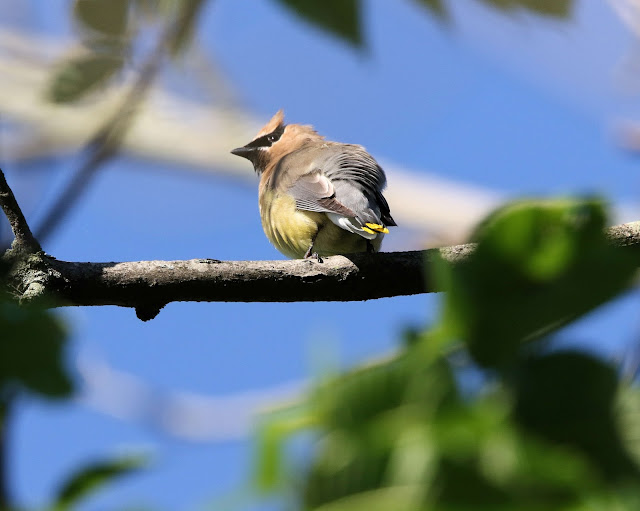 A flock of Cedar Waxwings were also busy in the tree....or should I say "gang" of Waxwings... 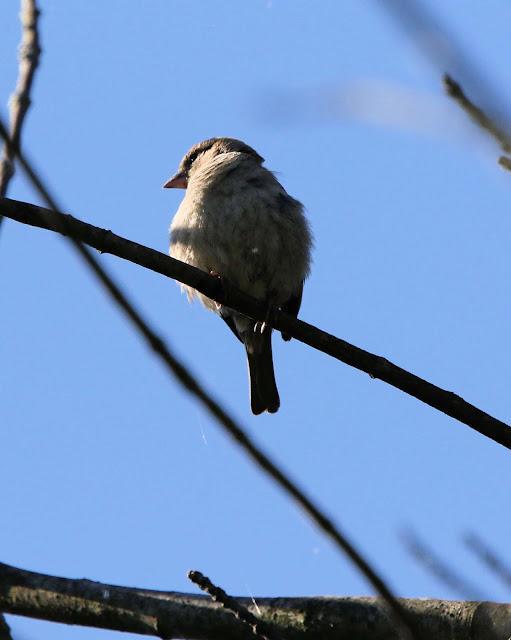 A Chipping Sparrow popped out to get a little morning sun...which was heating up quickly! 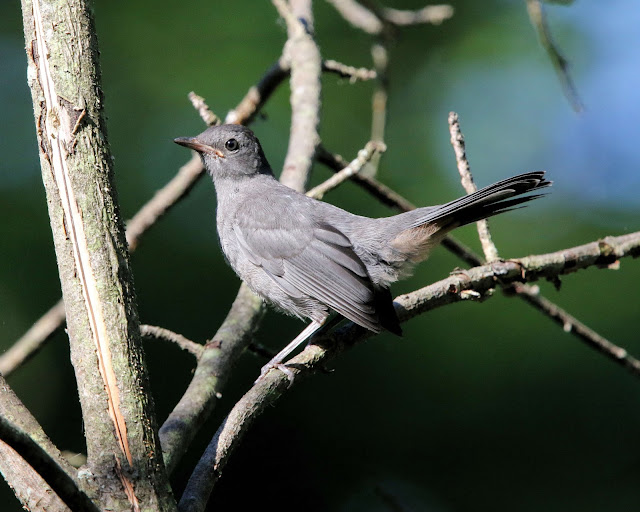 My buddy the Gray Catbird came out to say hello. 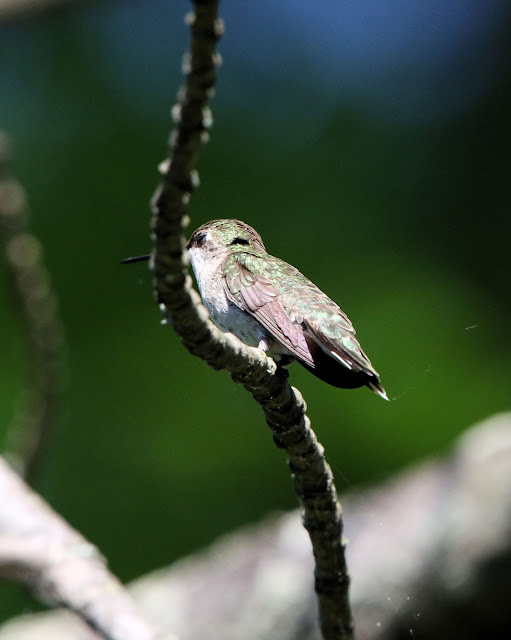 I thought I got buzzed by a bee!
It turned out to be a Ruby-throated Hummingbird heading to a nice open limb to catch some rays and take a little morning nap. 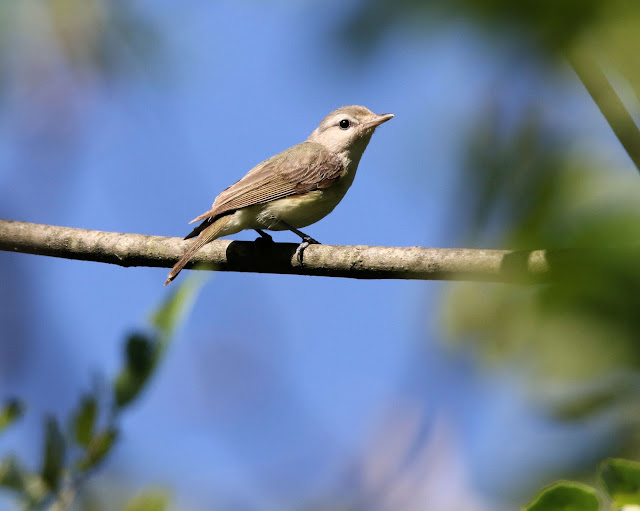 Even a Warbling Vireo came out of hiding and down low to take a peek at the crazy man with a camera. 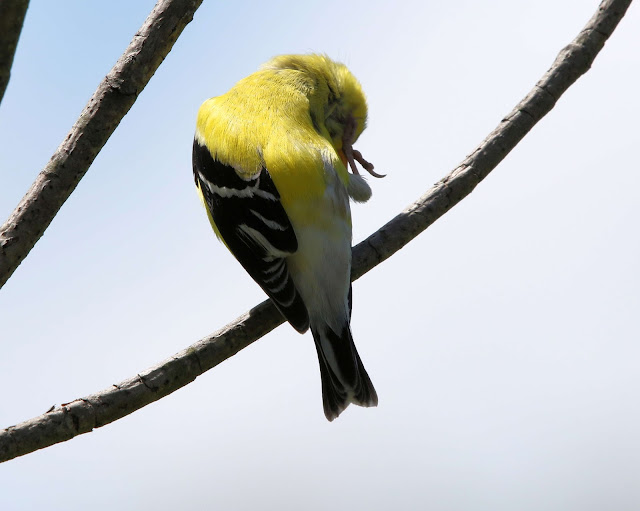 This poor American Goldfinch was a little embarrassed of me taking his photo...from behind... 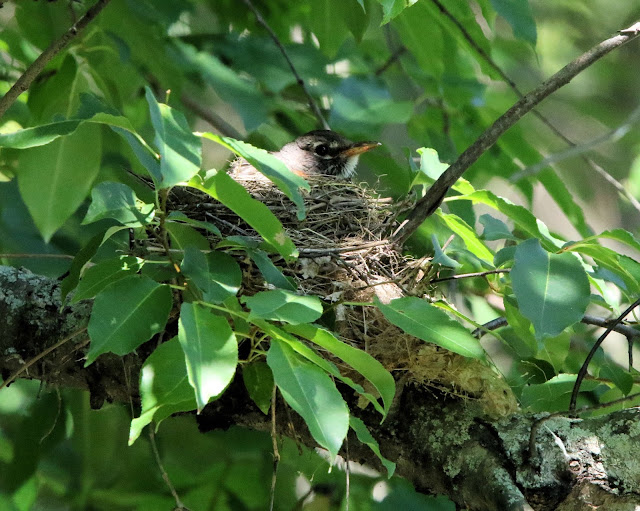 I decided to get out of the sun and head down the trail and some shade.
I looked up and there was an American Robin sitting on her nest. 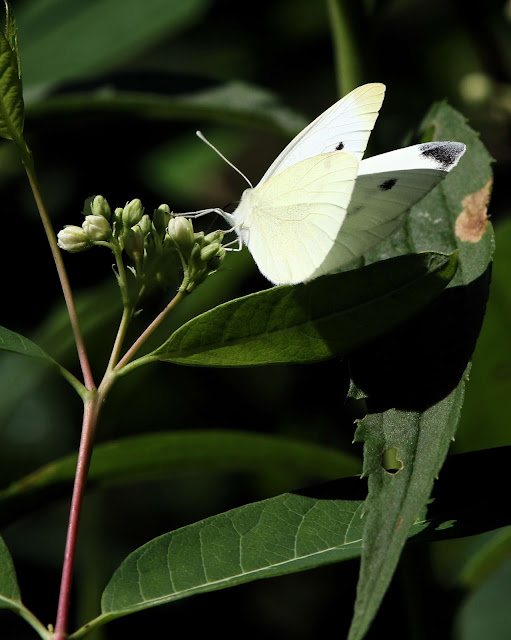 Surprisingly, I haven't seen many butterflies other than Cabbage Whites this year.
People need to STOP using pesticides in their gardens...it kills more than pests! 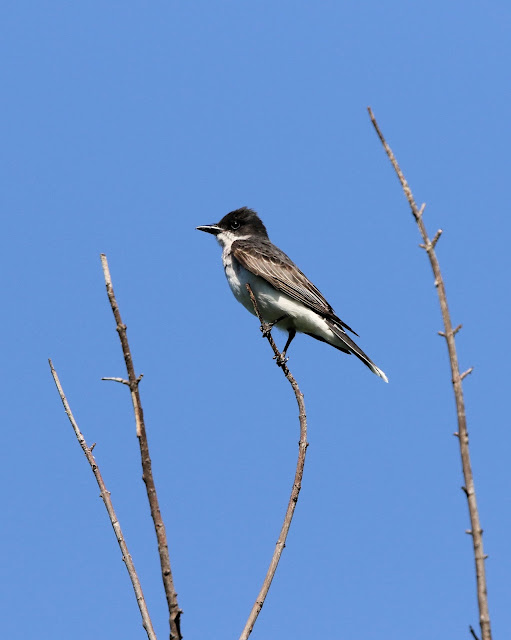 This Eastern Kingbird found the perfect perch to hunt from. 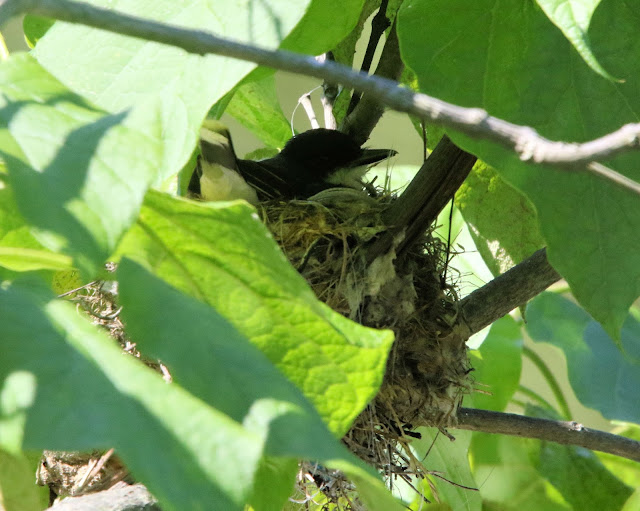 As I was walking around a small pond surrounded by fishermen, I saw a tree that had fallen and was laying over the water. I noticed a dark blob along the trunk, looked closer and saw this Eastern Kingbird sitting on a nest! Amazing! 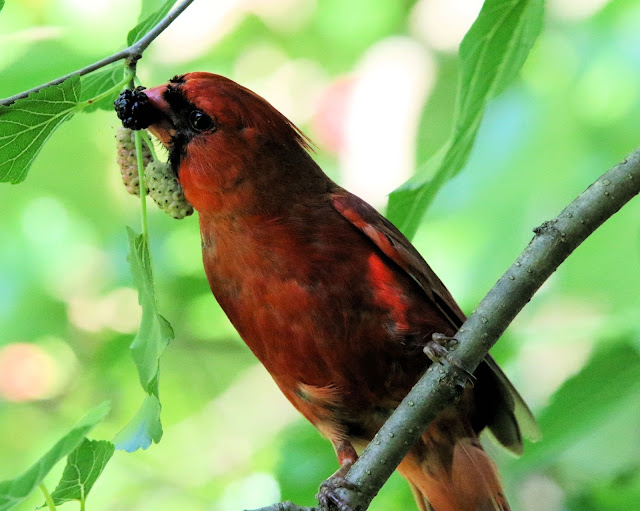 Northern Cardinals are usually very skittish, especially around me!
These berries must have been fantastic because he didn't budge an inch while he was chowing down and I was taking photos. 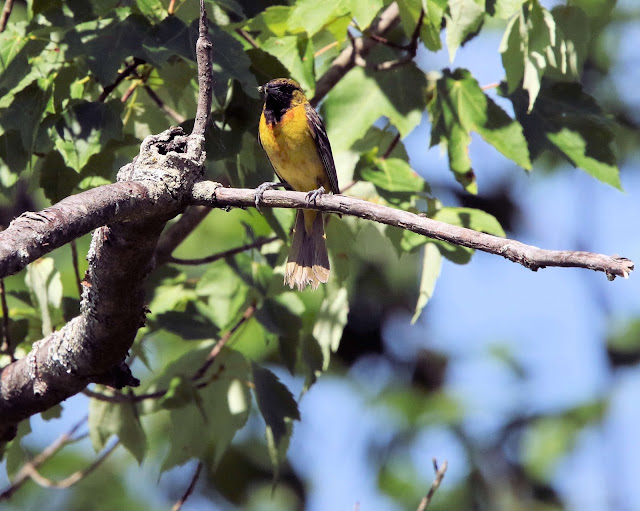 At first I thought this was a young Baltimore Oriole, but after looking at all of the photos, the black goes too far down the throat...it's an Orchard Oriole! 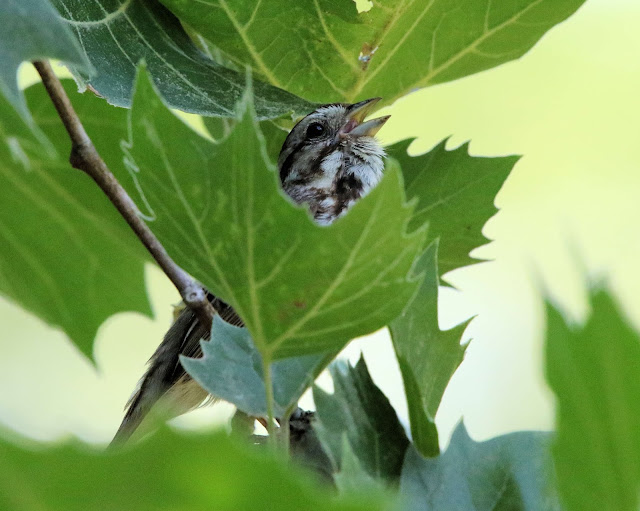 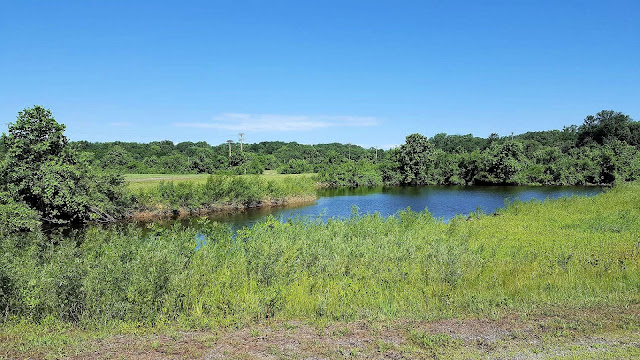 A far piece down the trail, a slightly meting Loopy finally found the area with the Osprey nest.
See those two poles WAY out there?
They're on the pole on the left of this shot. 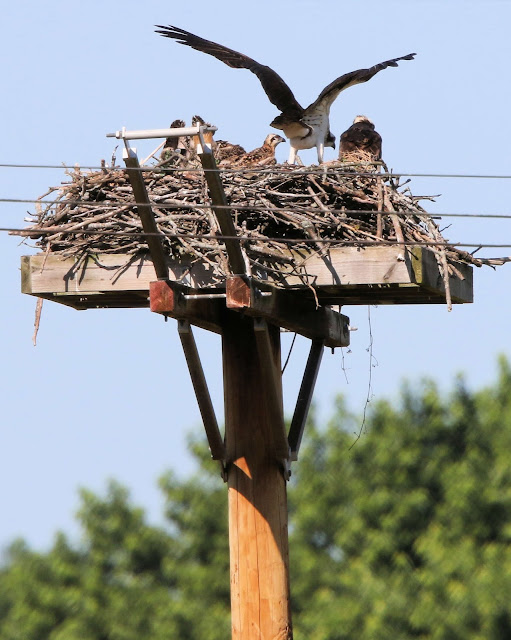 These are cropped a bit, 500mm is almost enough to pull them in!
It looked like two nestlings were in there....and at least a dozen House Sparrows  were also nesting underneath all those sticks and twigs. 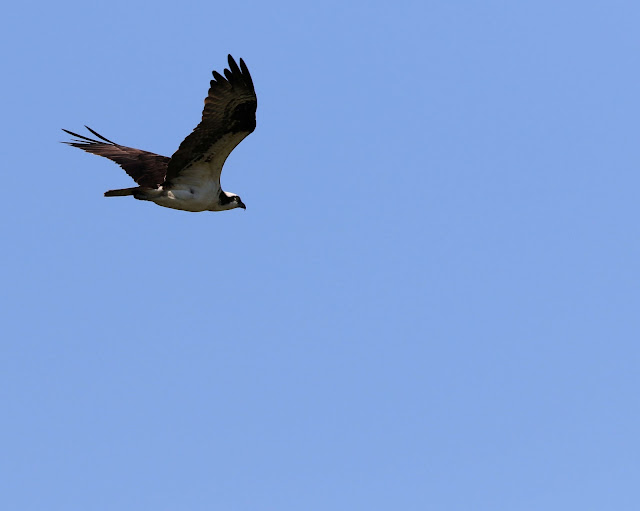 One flew off in search of a meal for the hungry kids... 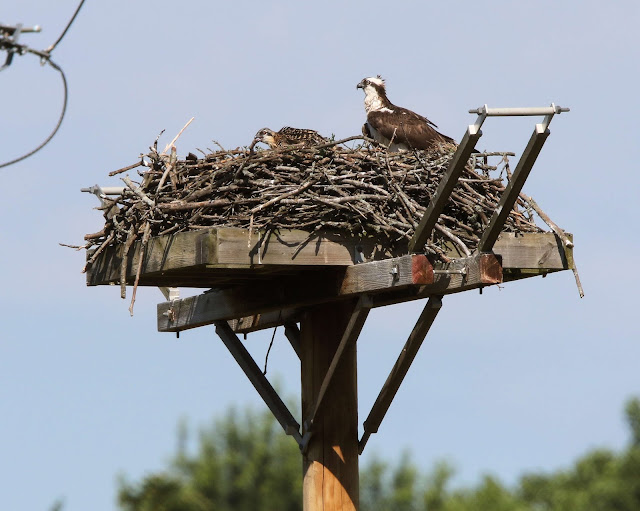 Waiting "patiently."
Kids are never patient when it comes to meal time!
I stood there for a little over an hour and never saw the mate come back.
I got hungry myself... 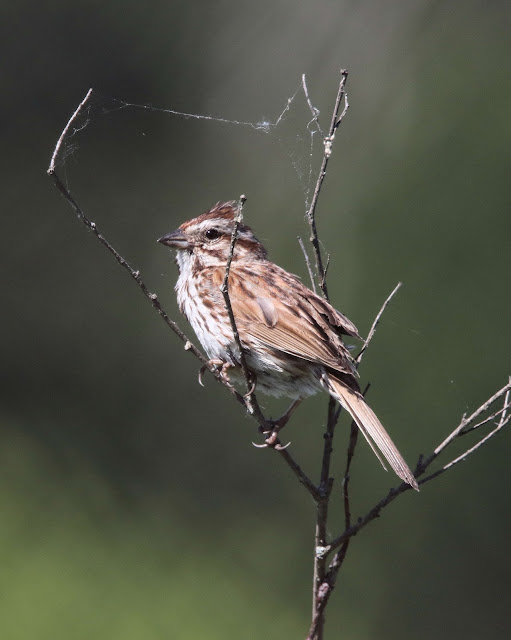 Just in case you were wondering...yes, I did see a few more of my favorite little buddies!
SONG SPARROWS! YEA! 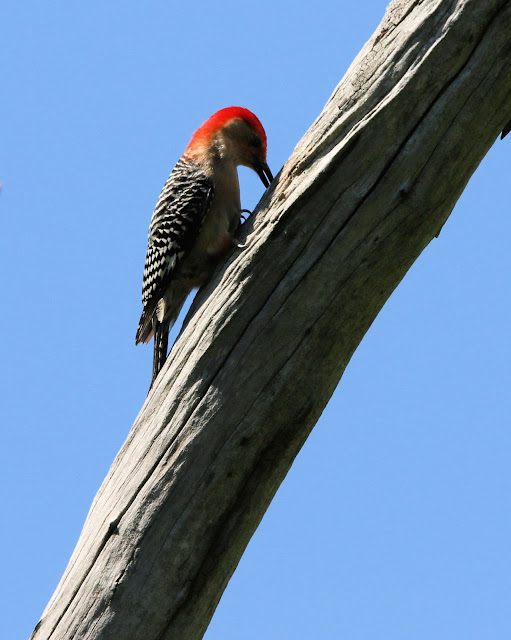 This Red-bellied Woodpecker found something good to eat is this dead tree. 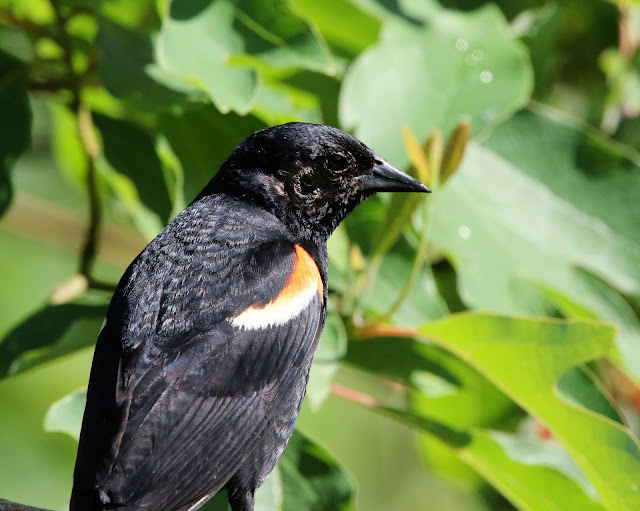 This Red-winged Blackbird seems to be missing some feathers around his ear.
Something you don't see often. 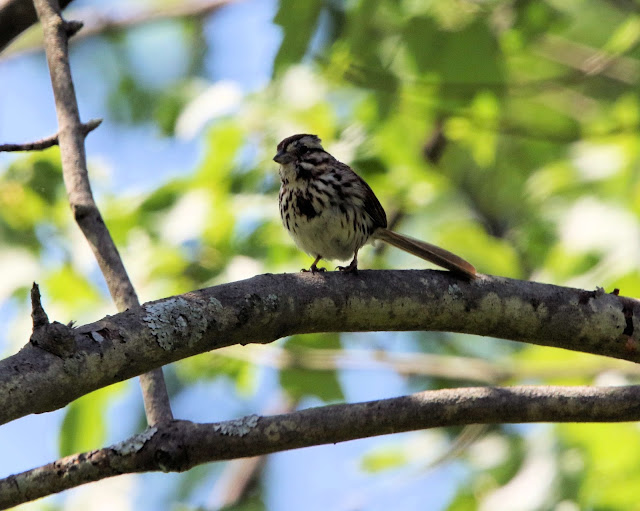 One last Song Sparrow on the way back to my car... 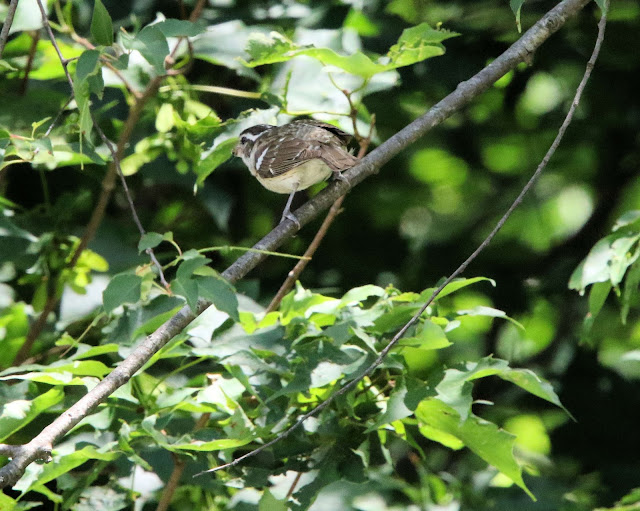 I saw something fly over my car while I was getting ready to leave...zoom-zoom...and right up in the tree was a female Rose-breasted Grosbeak!
A great way to finish a day in a wonderful new place to bird!

Oh my, I am so far behind in all of my photos...I have pics going back to May I haven't even looked at yet! AND on top of that, I went to Asheville, North Carolina for a few days to visit boss and friend for some more birding, southern style! So, that will take up the next few posts!


Until then, get outside and take a hike!