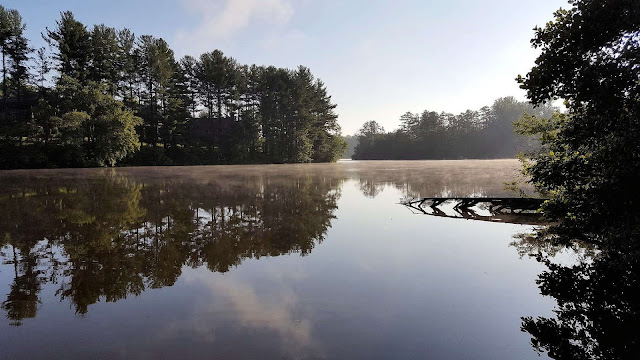 Once again, I made the ramble through the mountains of West Virginia, Virginia and Tennessee to Asheville, North Carolina. I made my first visit last fall to visit this guy that thinks he's my boss(Brian) and his wife Caron(she's really the boss!) and wander the woodlands of their beautiful area. I had such a great time...and I didn't seem to annoy them...too much...I needed to go back when the breeding birds could be found. One thing led to another and I postponed the trip for a few weeks, but the birding was still great!

Brian is even giving in to the brainwashing I've been performing on him! One of the next posts I'll show you the amazing find he had one evening! I was stunned! In the meantime, here's a few photos from the first couple of days down south...y'all.

(I just have to get him to invest in binoculars a little newer than the 50's...) 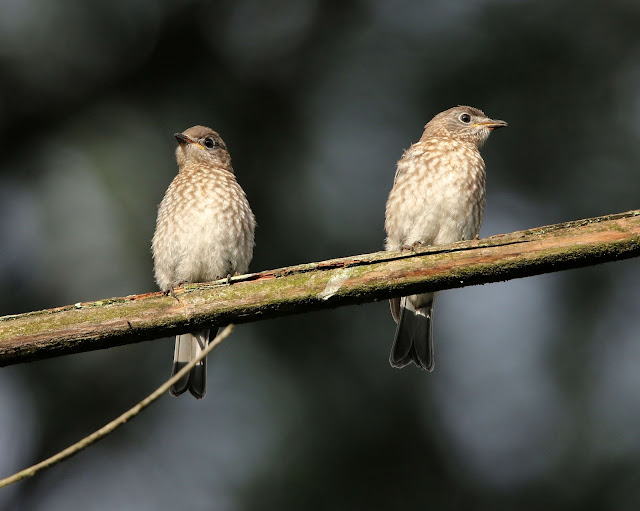 They had Chickadees, Nuthatches, Wrens and more nesting behind their home.
There were LOTS of Eastern Bluebirds looking for Pops to fill their gullets! 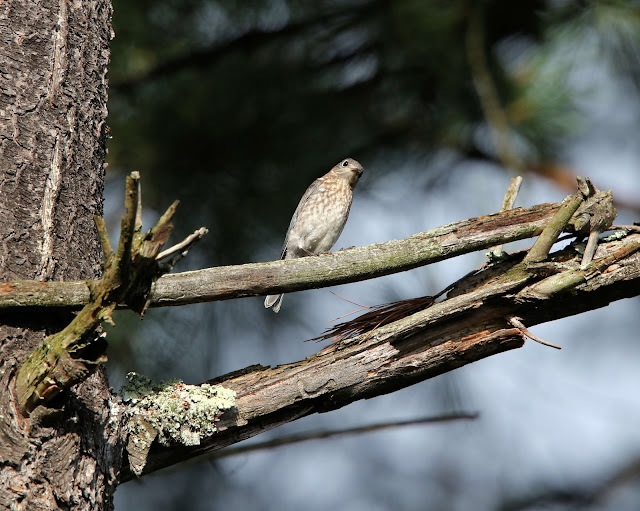 There's always one kid that's a little odd...not that there's anything wrong with that...look at me!
Well, on second thought... 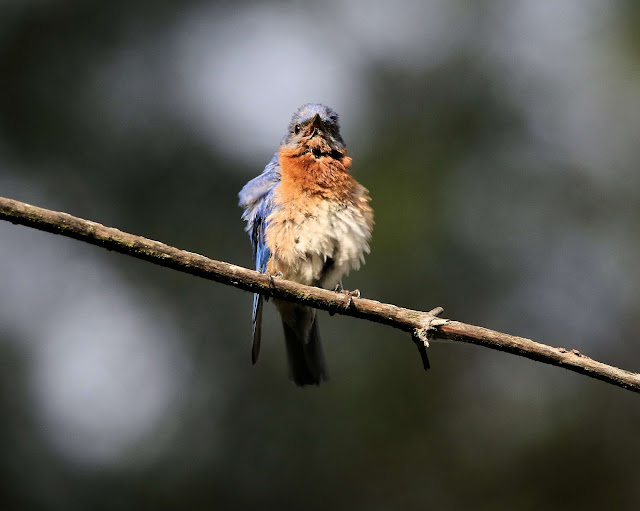 I found him a little later hiding behind this tree...smart guy. 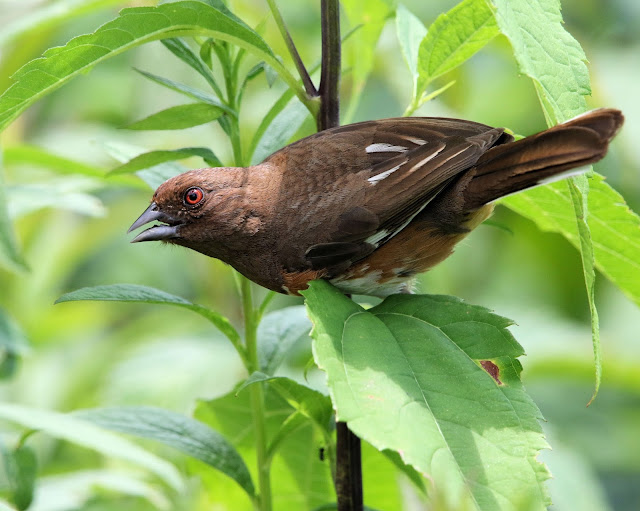 There were Eastern (South Eastern?) Towhees hiding and singing all along the lake trail.
This one actually came out to say hello! 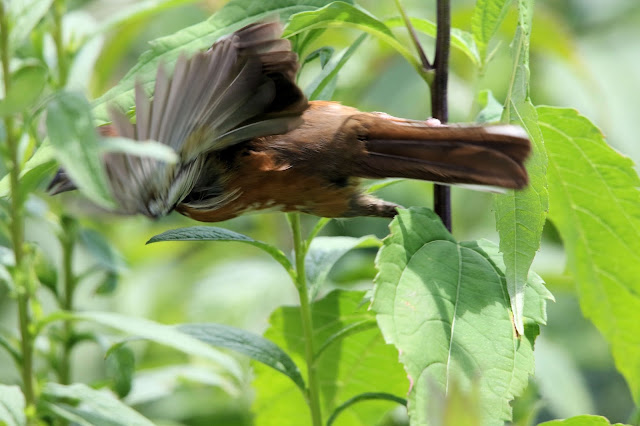 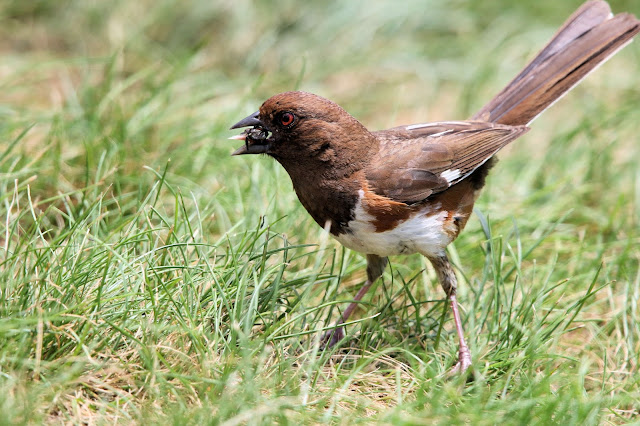 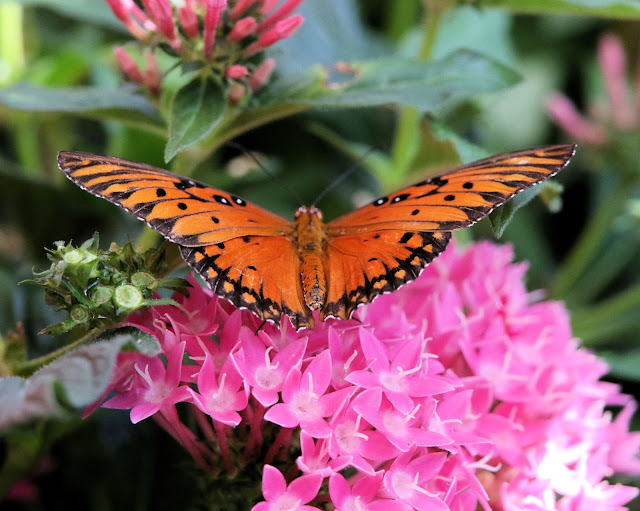 The butterflies up here in Ohio have been far and few between...I think they're all living it up in North Carolina!
This is a Gulf Fritillary. 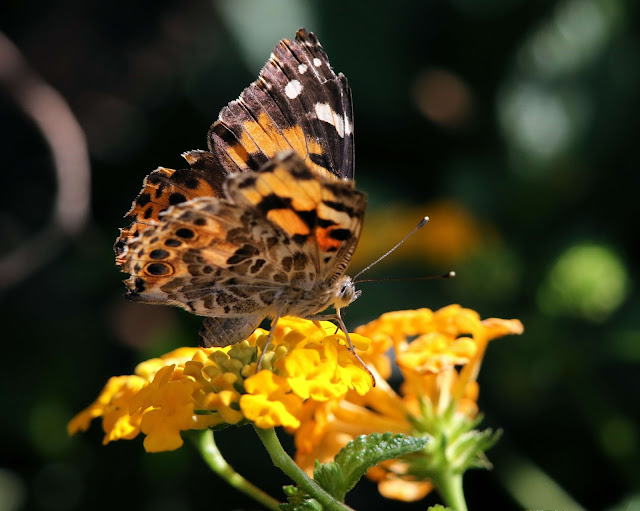 This is a Painted Lady...that's not what my dad told me a painted lady was...but that's for a different blog...

No otters, no bears, no deer, one squirrel and one chipmunk...the only mammals.
One day... 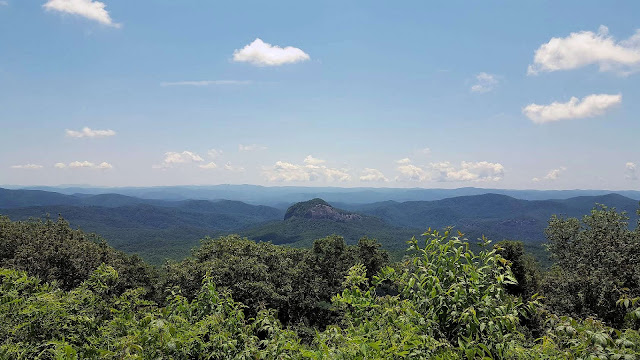 We also hiked on Mt. Pisgah...a name that makes me giggle because I'm so immature...if you haven't noticed by now... Anyway, this is the view of Looking Glass Rock. When it rains the rock becomes very glossy and reflective. No rain. Much better for me! 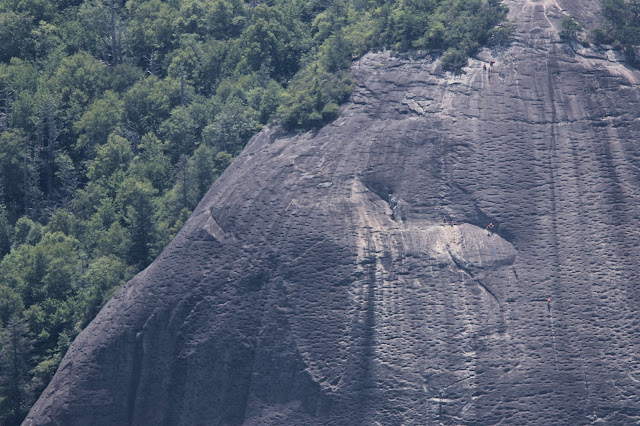 Oh look! There's people over there! 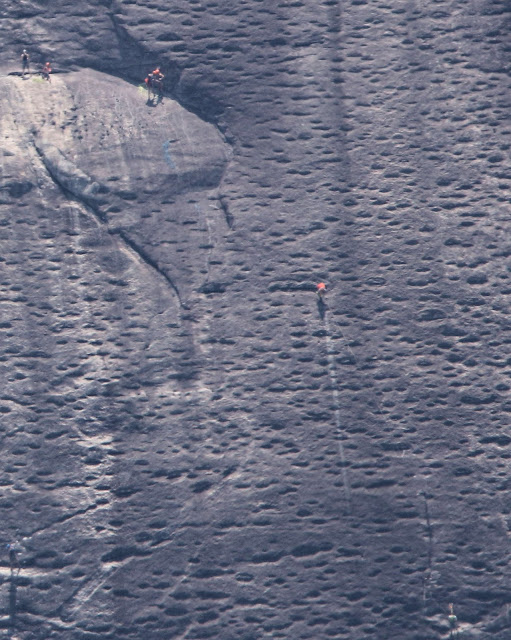 Yoiks! There's crazy people hanging from ropes up there!
No thanks...too hard to take pics of birds like that! 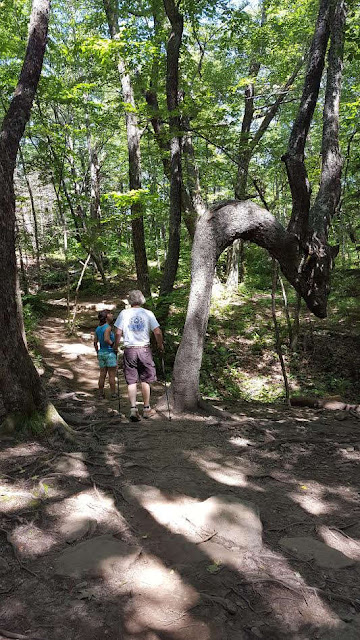 Caron and Brian leading the way!

We hiked along the Mountain to Sea Trail from the Blue Ridge Parkway. What gorgeous woodlands! They told me the trail led to "Skinny Dip Falls!" I saw lots of folks heading that way and back...and I thought, "Wow, there's a lot of folks that like skinny dipping down here!" This will be fun since it was so hot. 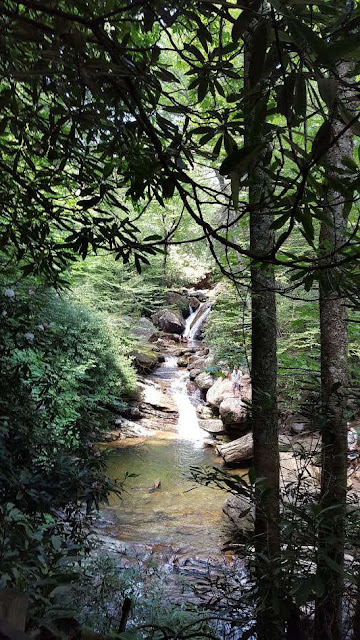 Imagine my dismay when I discovered "Skinny Dip Falls" was just a name...
No skinny dipping allowed...no sense of adventure!

Oh well, back to hiking and looking for a bird. It was the awkward time of day when the smart birds are chilling out...skinny dipping in puddles and creeks staying cool... 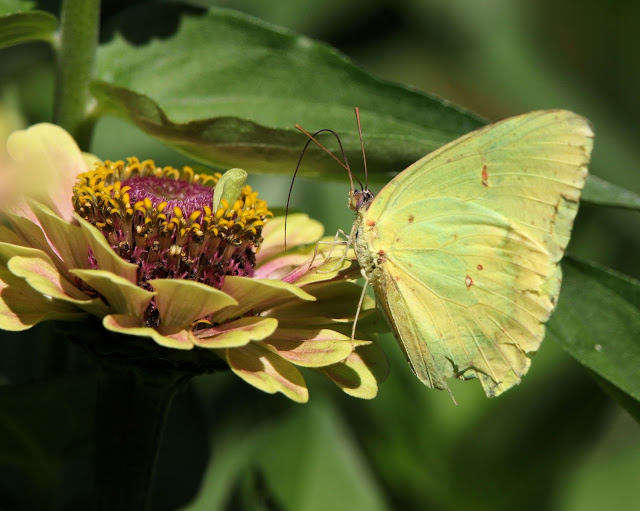 Back to reality and butterflies...almost like the sky on this day...a Cloudless Sulphur. 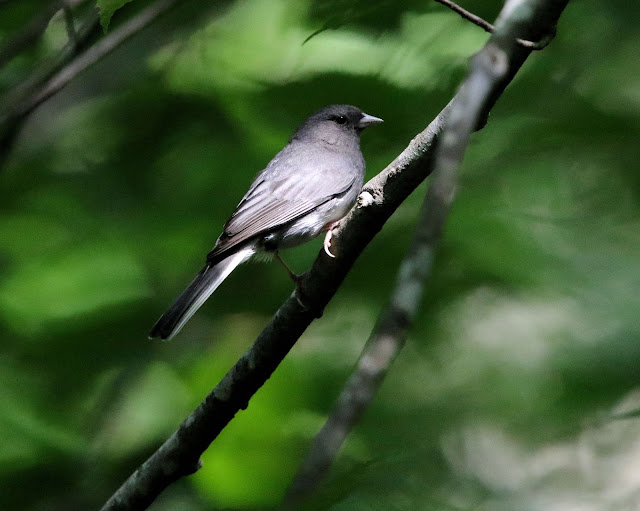 A bird at last!
I could barely hear their calls in the woods...this one was close enough to really get my attention!
A Dark-eyed Junco! We don't see those often this time of year in my neighborhood. 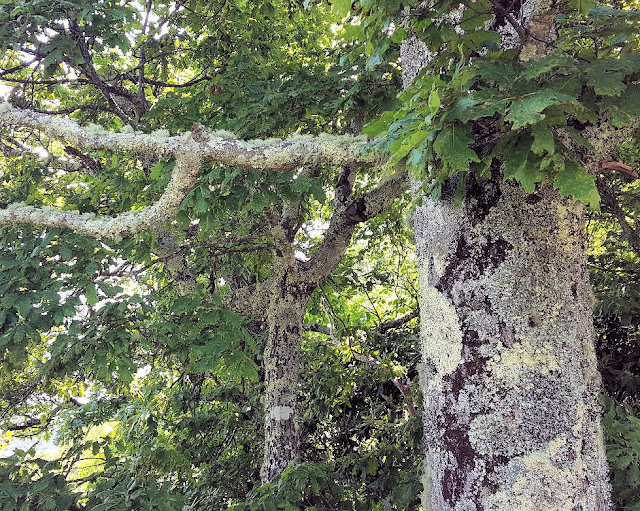 I'm lichen this tree!
That joke never gets old...maybe.
Lots of lichens and mosses covered these trees. 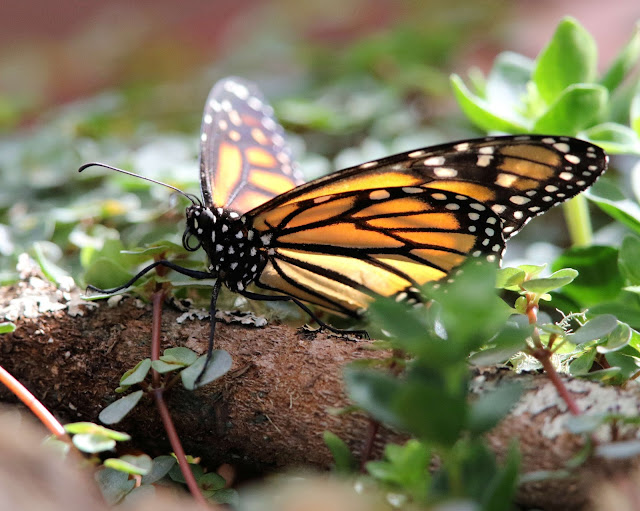 We even saw a few, very few, Monarch butterflies while hiking in a few different places.

PLEASE! If you have a garden, don't use pesticides or chemicals. Those chemicals don't know the difference between helpful and harmful insects. They will kill them all. Bee and butterfly populations have dropped dramatically in the past few years and our overuse of pesticides, fertilizers and other chemicals are not helping things.
No pollinators means no food... 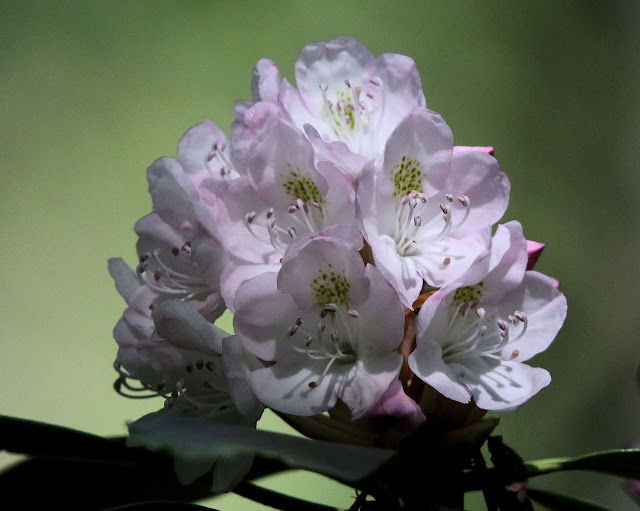 Imagine life without beautiful flowers like this Rhododendron growing wild in the mountains... 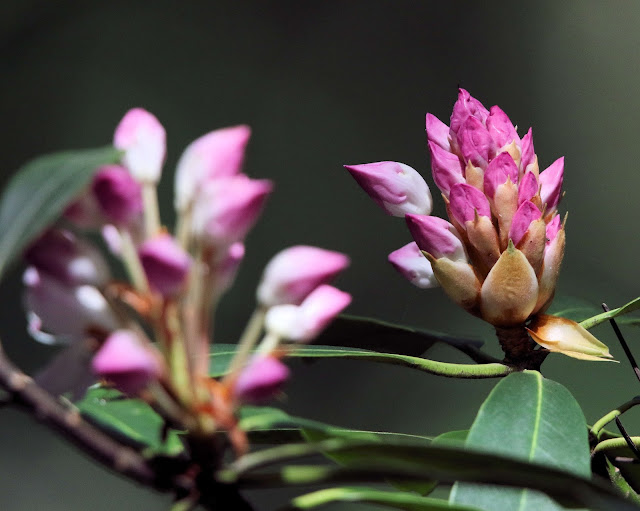