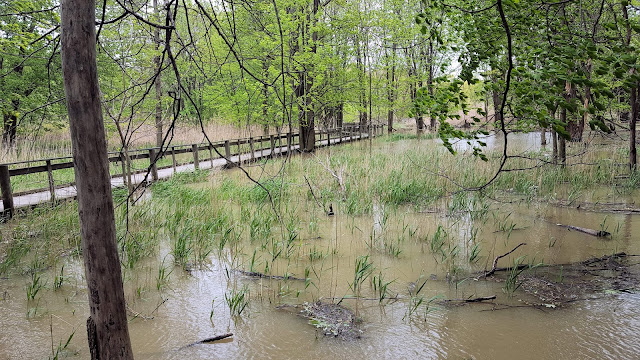 Please note the water...it's not supposed to be that high...not even a little... 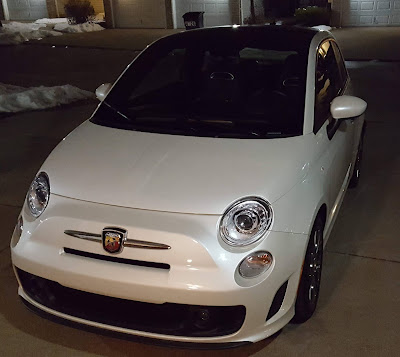 Please note my tiny car....it's about 4 inches above the ground.

So...I took my weekly trip out to Magee Marsh a couple weeks ago. They had thunder storm warnings. All the better to see them warblies down low I thought to my silly self. They also had flash flood warnings. What do those weather folks know? I thought "I'll be fine..." I just won't drive the Miata. I'll take the Fiat 500 Abarth...so it's lowered...what are the odds that it will flood while I'm there.

The odds were excellent. I was on the main road...cars and trucks in front of me and a very large semi right on my tail...oh my...look how deep that water is on the road ahead...oh my...look how big that bumper is on that semi behind me...SH*T!!!!!! Well, no choice but to push ahead and create a nice bow wake in front of my tiny car. The river was pushing over the road with a calm pace. The exhaust tips were under water...making a cool glurgling sound...as long as I don't slow down or stop I'll be fine. And I made it!...twice...the second flooded area was a little more exciting. As I was driving through slowly, a semi came charging through in the other direction and buried me in lovely smelling marsh water. I heard him laughing as he passed...my window was open a crack.

Well, the smell is finally gone from my car and my hands have stopped shaking...and now you know how I got the nickname "Loopy." I ain't the brightest bulb in the box...butt I have a fun time!

I'll just keep heading west and stop off at Maumee Bay. There's higher ground out that way, then if need be I can head south from there, then back east and home. Lucky me! Maumee was open and the flood waters on that end of Lake Erie were lowering just enough for a few hardy birders to take a chance on their boardwalk. As you can see in the above photo, the water dropped enough to have a nice walk. It's still a few feet above where it should be, but it dropped off the walkway in most of the areas...besides, my shoes are waterproof and I'm relatively water resistant! 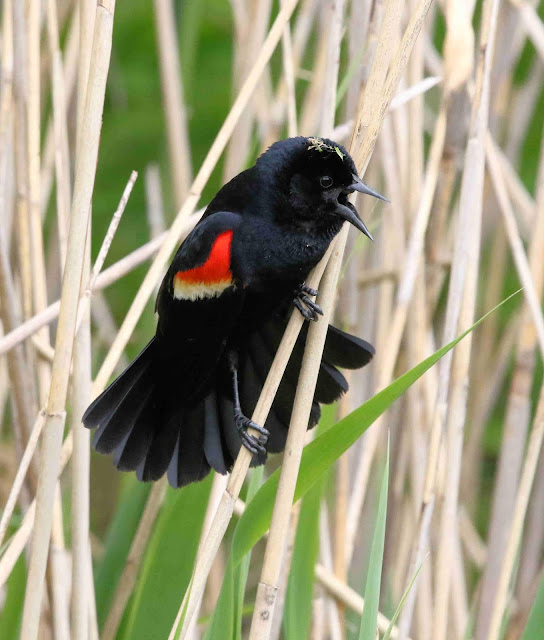 I don't know if he was calling his mate or laughing at the skinny guy wading with his camera. 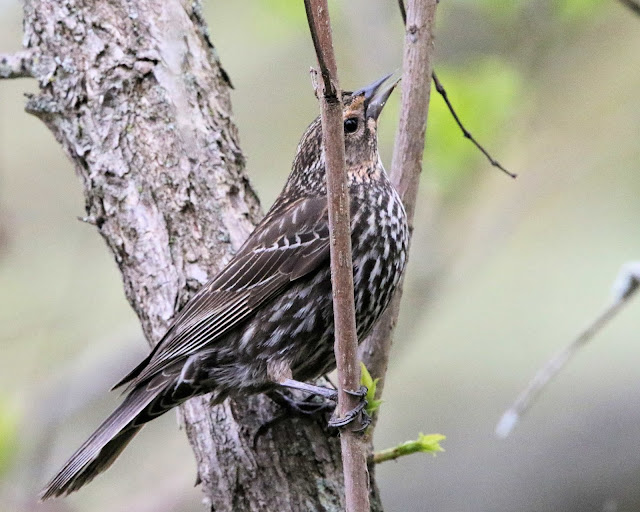 I know the female Red-winged Blackbird was laughing...I get that a lot... 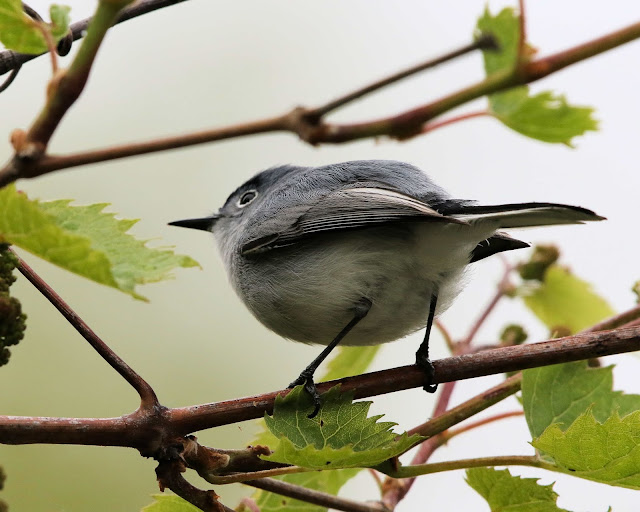 It was an excellent time to spot Blue-gray Gnatcatchers!
They even posed properly for me! 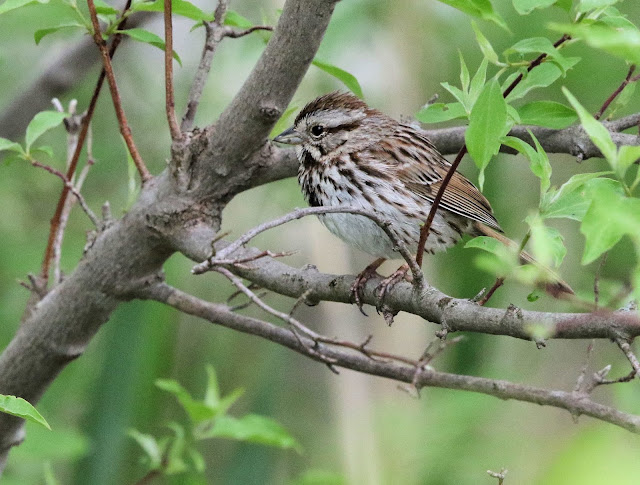 A day isn't complete without at least one Song Sparrow.
I think he was in shock over the flooding. 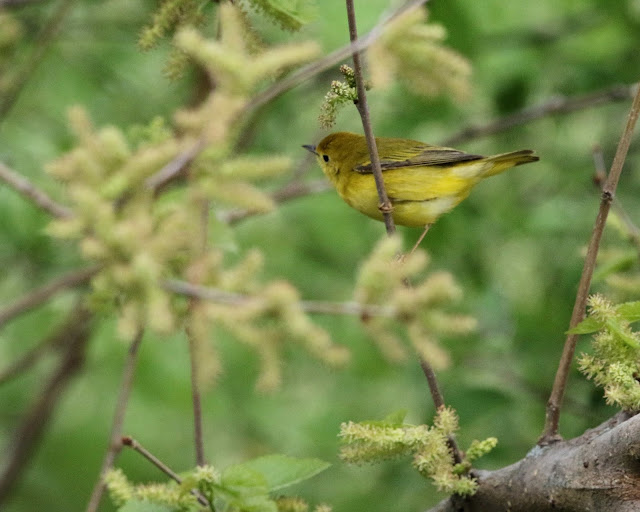 There were only a few warblies out and about....smarter than us humans.
This female Yellow Warbly was heading to a nest in the distance... 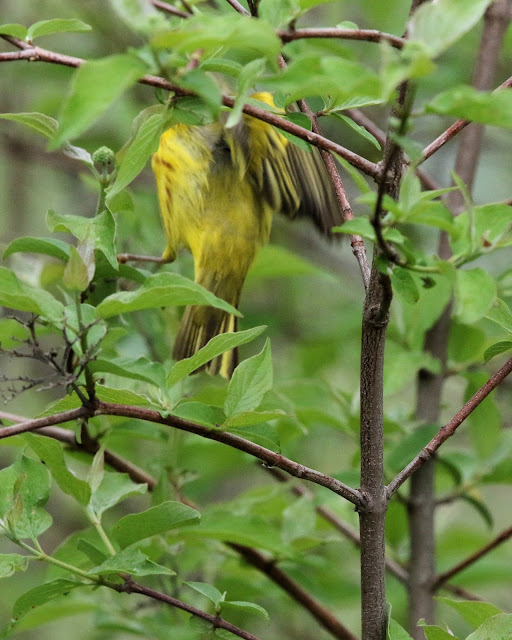 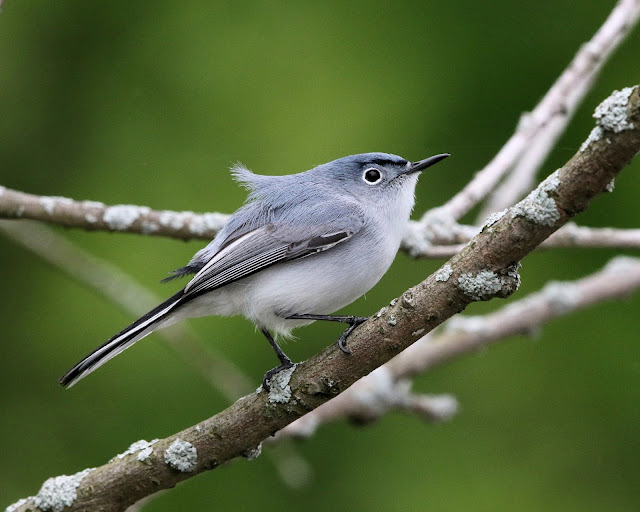 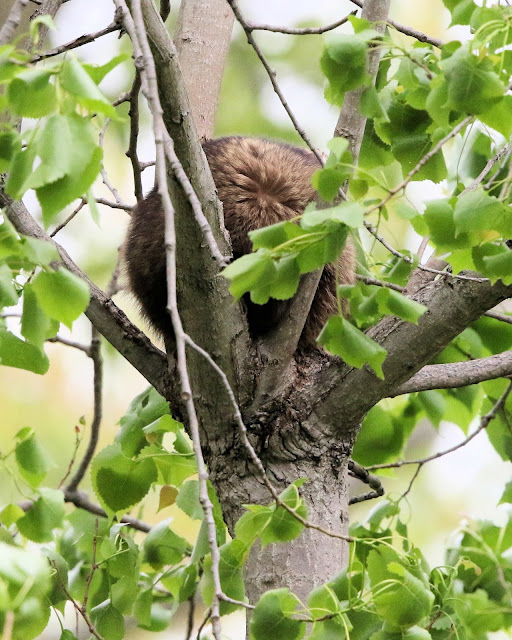 Yes indeed, that is the rump of a raccoon...you could hear him snoring. 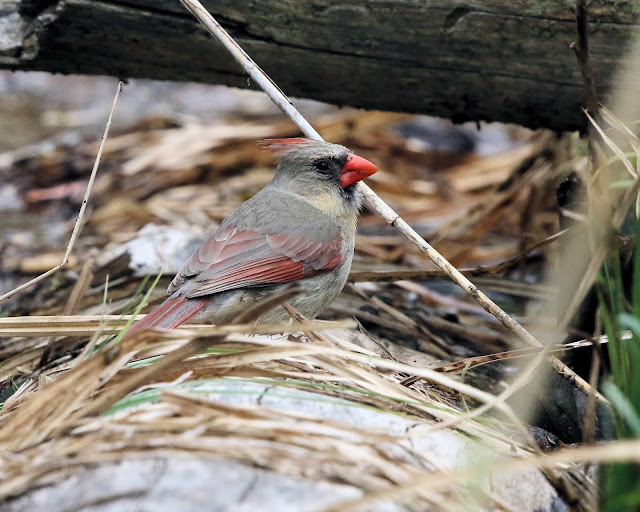 I bumped into a very nice couple from Colorado, they came just in time for the weather.
They had two target birds on their list, which some birders laughed at.
They wanted to see a Northern Cardinal and a Blue Jay...we found both within moments of each other.
Never laugh at folks from other areas, your common and local birds may be very uncommon to others!...plus Cardinals and Blue Jays are cool to look at! 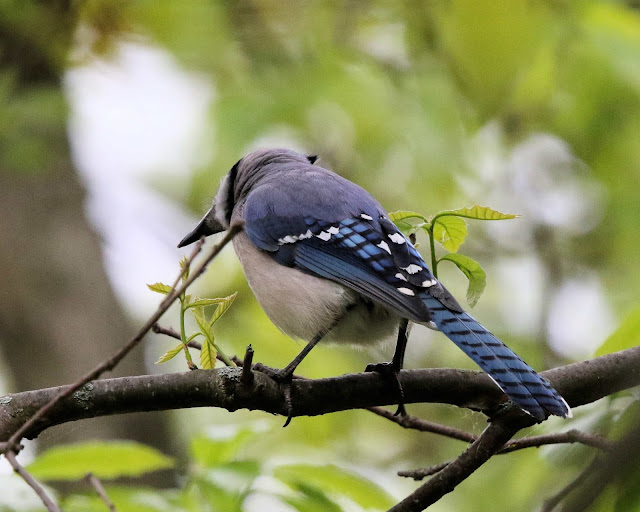 Blue Jays have the most beautiful pattern on their back! 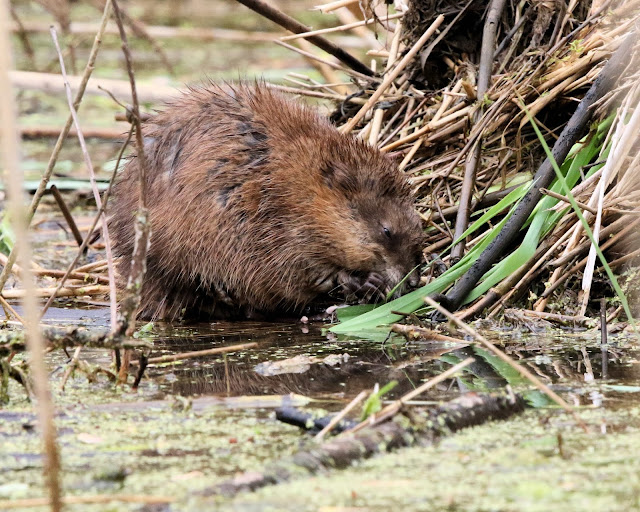 Judging by the look on that Muskrats face, whatever he's eating must be deeeeelicious! 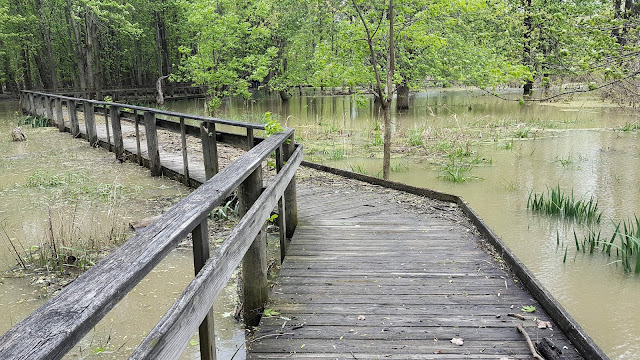 You can tell by the detritus on the walk that the water was quite a bit higher earlier.
It should be about another foot or so lower in this area... 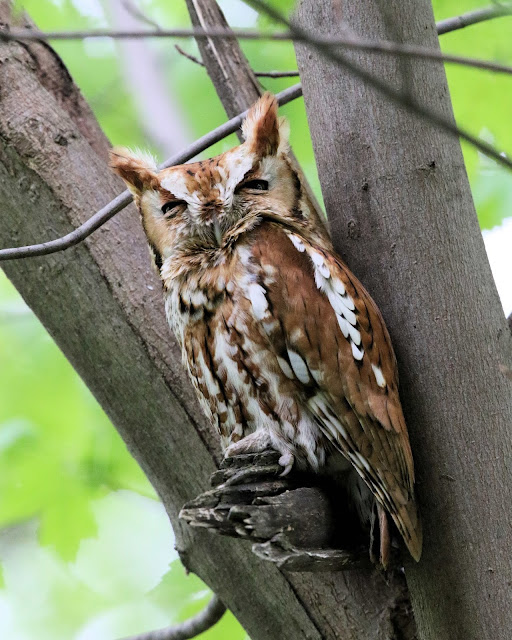 Every year at Maumee for the past four or five years, I've seen a red morph Eastern Screech Owl.
She didn't let me down!
And... 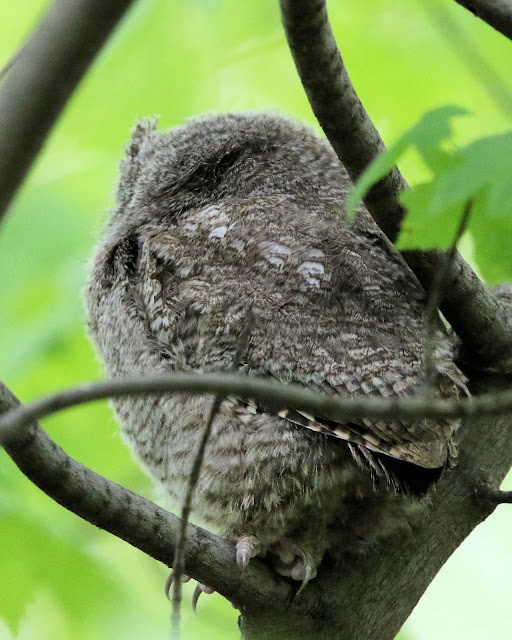 We were playing peek-a-boo through the blowing leaves and branches. 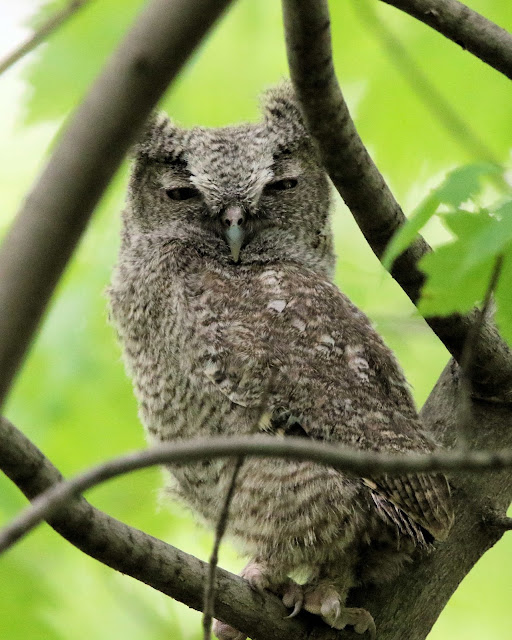 I heard that there were three of these cutie owlets in the trees, but I could only spot this one.
Look at those mighty talons! Mousies beware! 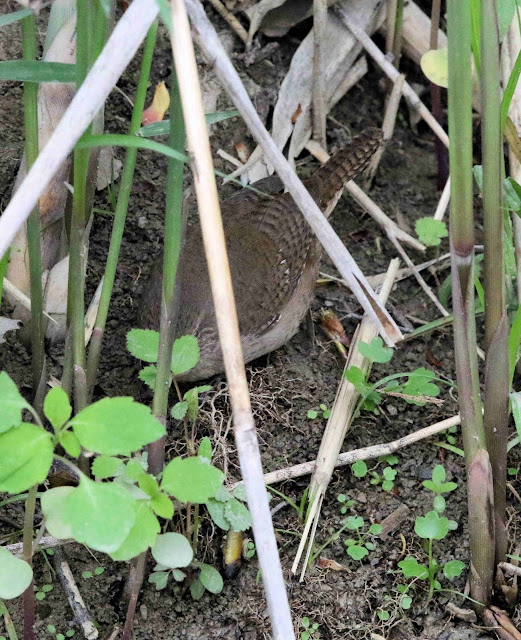 I may be one of the few that will chase a simple brown House Wren around trying to get a photo...another common bird that I love.
As you can tell, I finally gave up...he was hiding too well. 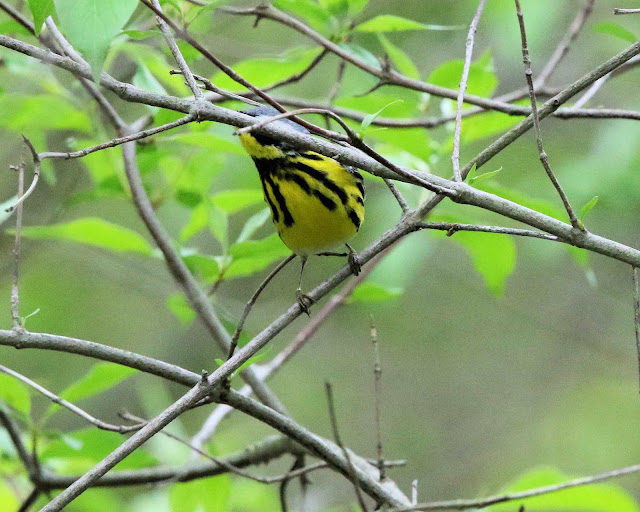 Another one of those one second earlier he was posed so nicely shots.
Magnolia Warblies are always so busy hunting juicy bugs. 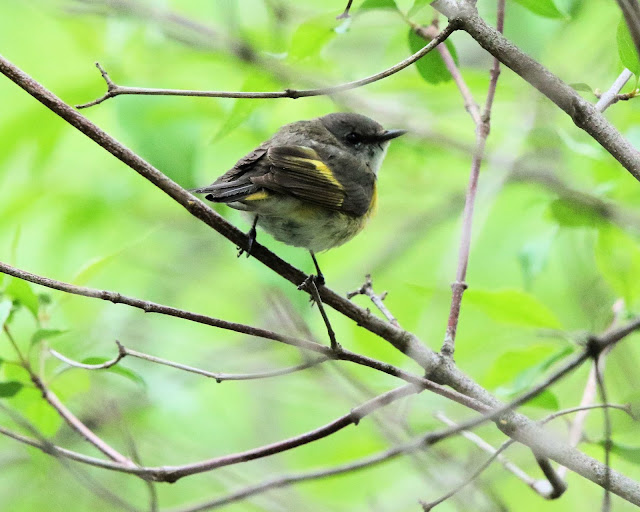 A first year American Redstart turned around just for me.
What a nice lil warbly. 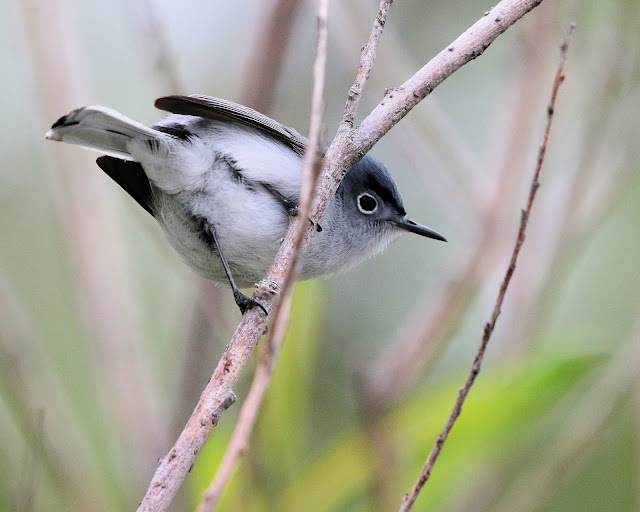 Have I told you about the Blue-gray Gnatcatcher invasion yet? 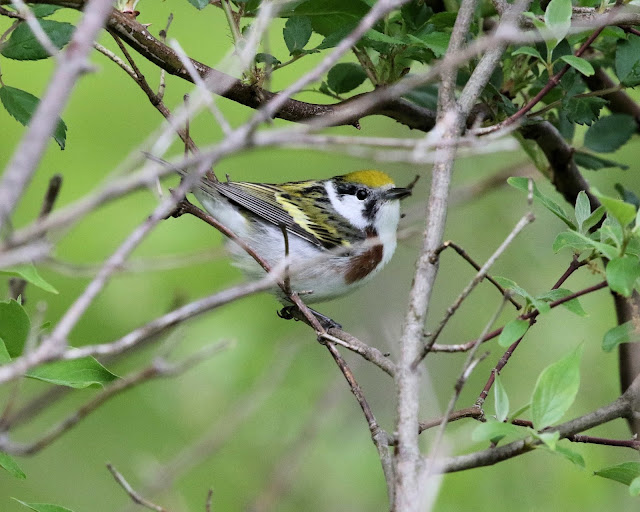 This Chestnut-sided Warbly did his best to hide in the tangles. 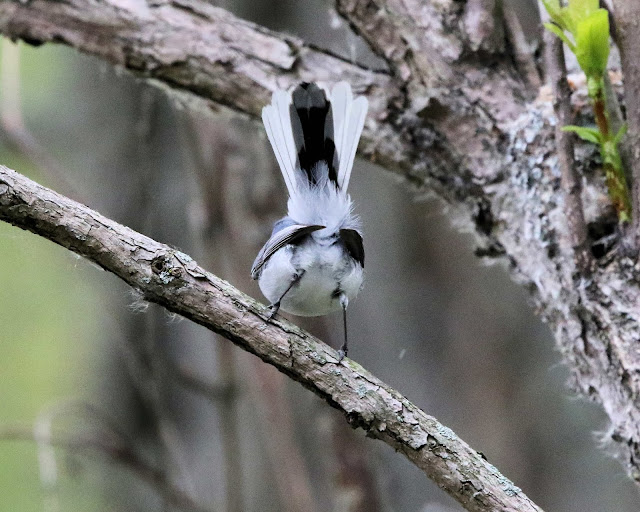 I will leave you for now with one final shot of a Gnatcatcher and his flashy tail!