The Search for the Yellow-headed Blackbird...the sequel 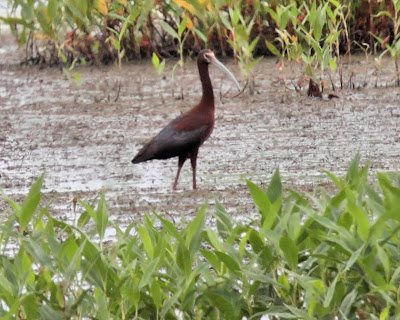 Onward with our continuing search for the fabled bird of mystery, THE YELLOW-HEADED BLACKBIRD...yeah right, meanwhile back in the real world...
Ottawa National Wildlife Refuge encompasses somewhere near 9000 acres I believe...and there's ONE pair of Yellow-headed Blackbirds hiding from Doodles and the Loop. We've been out there every weekend and no luck. Sorry to give away the ending so soon, but there is a shining moment in this tale of suspense!
Please note the first photo. That is, my bloggy buddies, a White-faced Ibis. We heard from a fellow birder one had been sighted, again there's that small quantity to find, one lone bird! Well, what do you know, me and the Doodles walked to the farthest area of the refuge and there he was, chowing down with a gang of Mallards.
Now for the western U.S. birders this is not a big deal, but fer us mid-westerners, yee-haw, it's a big hoot! As of 2008, only about 17 of those beauties have been seen in Ohio. And I got a photo too! It's not the best photo, I'll admit, but I'm still waiting for someone from Canon to send me that 800mm lens to test for them (I won't charge you!).
So, we're happy, even without the Blackbird...there's always next weekend! 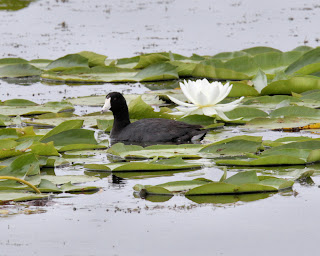 Wow, an old coot, other than me...this one is an American Coot, hey, I'm American too. We have so much in common, except I can't swim.


We see a lot of Canada Geese, sometimes too many, but this was the first we've ever spotted with a neck band. I reported it to the USGS Patuxent Wildlife Research Center. They track the bird bands in the U.S. and Canada. 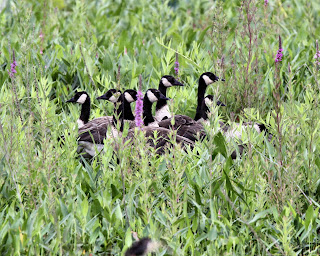 This gaggle of Canada Geese were working on their Meerkat impressions. Pretty good job! 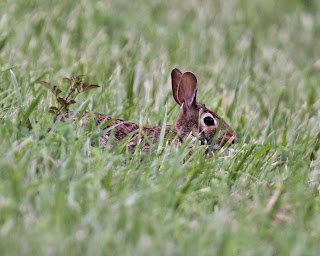 That's definitely not the Blackbird! I wonder if this Eastern Cottontail knows the bunnies that are munching up our gardens? 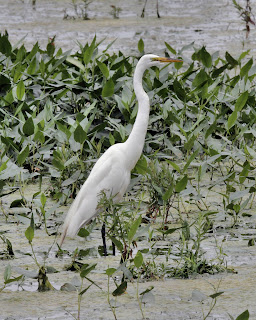 This Pied-billed Grebe had three youngsters to try to keep track of. They were hiding so well the adult couldn't find them either!

Here's a Pied-billed Grebe little one from a different family. Yep, there's a lot of them out at Ottawa, all playing peek-a-boo!

THOUSANDS of Red-winged Blackbirds...where's your Yellow friend? None of them were telling... 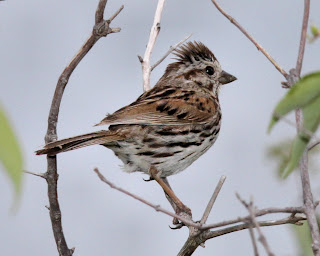 And I thought I was having a bad hair day! This poor Song Sparrow was trying to look trendy.

The Trumpeter Swans are doing well. This pair had four Cygnets to care for. I've seen the female before and have reported her band. She was banded in 2004 before she could fly from an area close by. If you report the band numbers, you will usually receive a certificate with information regarding the time of the banding and general info on the bird.

This is a second pair of Trumpeters we saw on our adventure.

The End...
Stay tuned for more silliness in the:
FURTHER ADVENTURES OF...DOODLES AND THE LOOP GO BIRDING!

*I have a small correction to make here. The Trumpeter I saw previously was actually not the same as the female pictured here. The other was band number 3A0. I received an email today concerning the new pair and the Canada Goose. They requested photos and will forward more info soon. I'll update when I find out more!
Posted by Dave at 9:10 PM