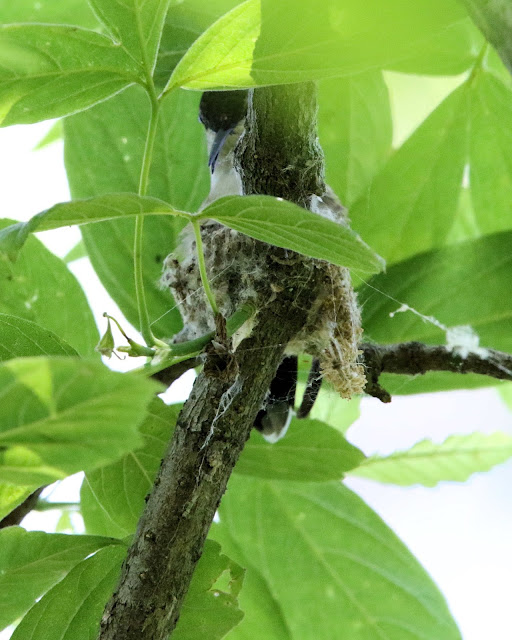 I've often heard that when out in nature you need to open your eyes and SEE whats all around you, not just look and watch. When the birding gets "slow," that's when you really must be aware of your surroundings. This day at Magee Marsh(where else?) was one of those days. The trees and scrub were leafed out and movement was difficult to spot. Being "color challenged" things tend to blend in with all of the greenery for me, so I need movement to be able to find my next victim for my backwards camera!

This was one of those days. I saw something zipping along the ground and had my hopes up for a Mourning or Connecticut Warbly. This turned out to be even better! It was a Ruby-throated Hummingbird buzzing along the ground through the scrub, then picking at something along the trunk of a tree. I followed it as it came out then up...straight up over my head and into the green leaves.

I backed up a few feet to get a better view with my bins, and what a great treat! It was a female building a nest directly over the boardwalk! Just high enough to be completely out of sight unless you knew where to peek through the bare limbs. The beginnings of a tiny nest of spider silk and lichen. Carefully placed and tamped down by her minuscule little feet. She'd flit away, then soon return with more materials, getting inside the cup and walking in circles to press things down to make a comfy home for her future charges.

I watched quietly and discreetly for over an hour and showed a number of people what I was seeing. All were amazed. And I told them to do more than "bird watch." Open your eyes to be astounded by the things going on all around us every day. 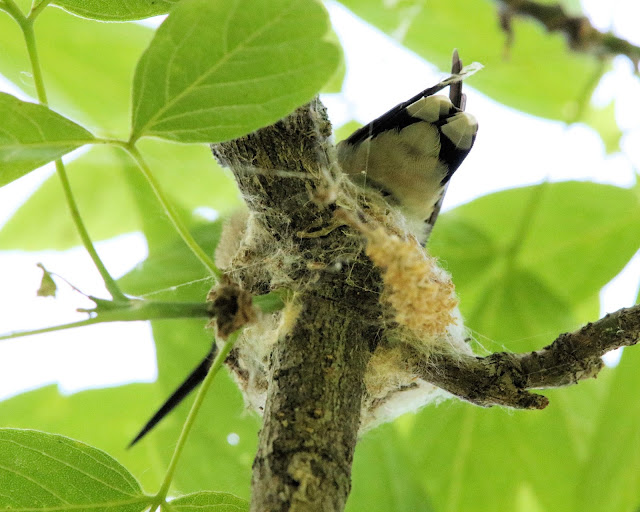 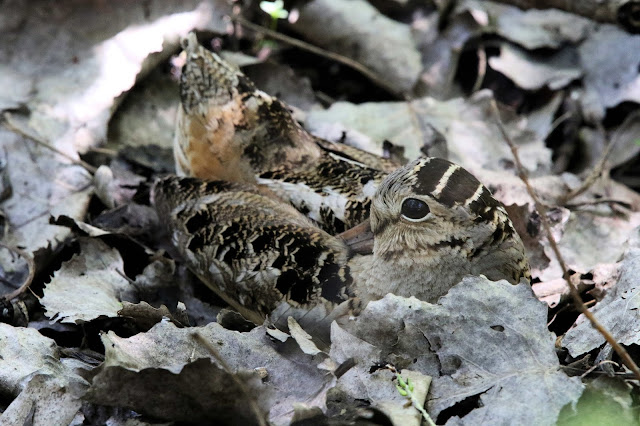 Not much farther along I saw a couple sitting on the boardwalk with video cameras pointed at the ground close by.
They had found an American Woodcock resting in the leaf litter.
This would have been a bird you would just walk right past as it blended in so well. 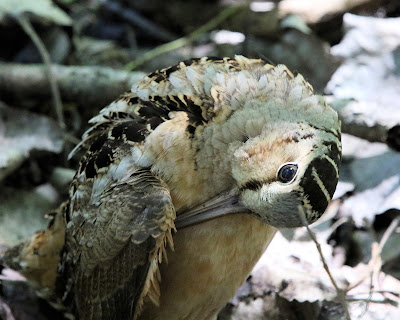 After a good rest, a little preening is needed...smell better yet? 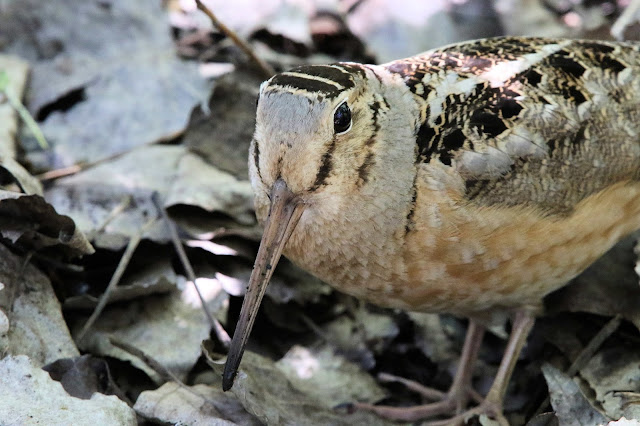 I like when they're close enough that I don't have to crop the image.
It eventually got too close to photograph...and off we both went... 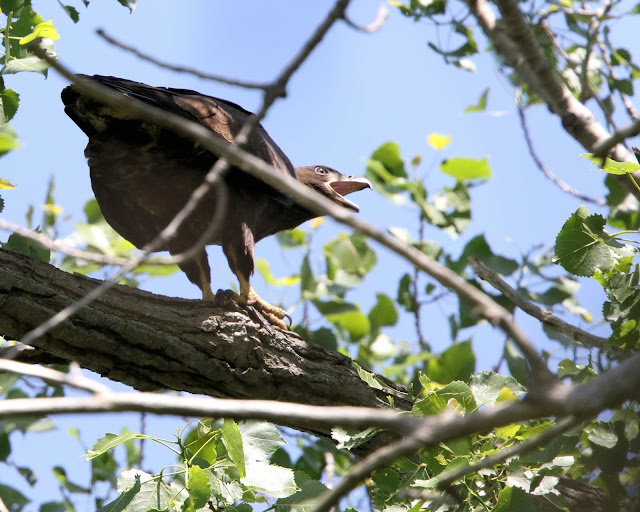 This recently fledged Bald Eagle was being strafed by a pair of Yellow Warblies!
Brave little birds. 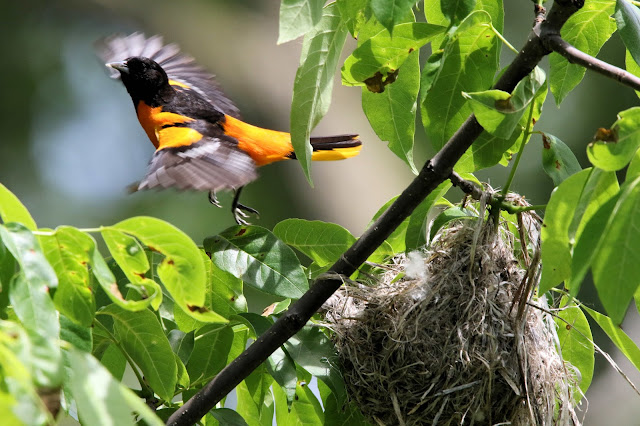 This Baltimore Oriole was just flying away from the nest, making sure it would do. 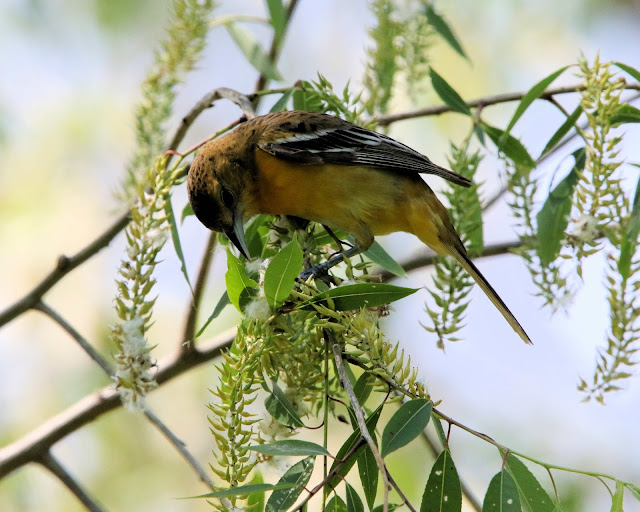 THe female was taking a break from all of her work for a nice snack. 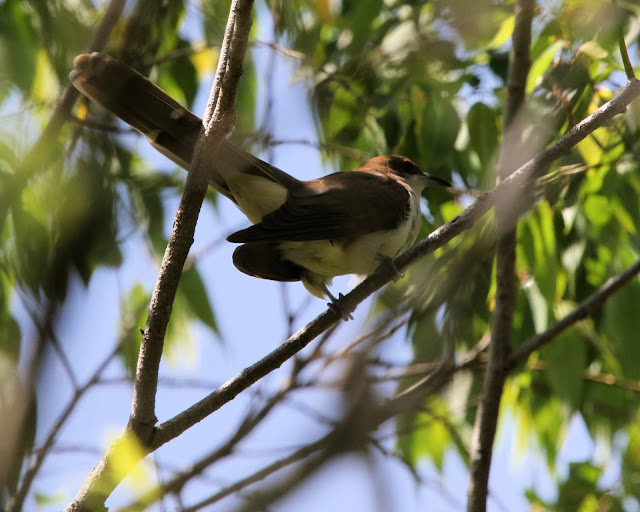 In a tree within fifty feet was this Black-billed Cuckoo.
There was a lot of talk of both of our species of cuckoo in the same tree.
I stared for a long time with a few others before I spotted him way in the back through the leaves.
I always look for the odd shape in the tree! 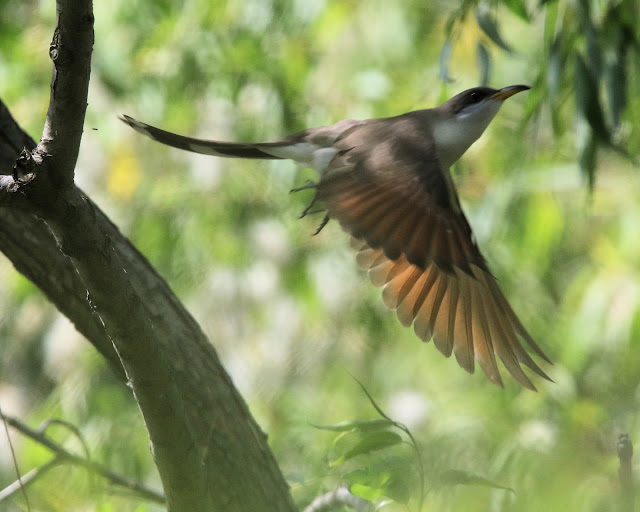 As I was walking away thinking I would only see the one, this Yellow-billed Cuckoo came zipping by! If you only see them from the back, look at the spots on their tails. Small spots are on the Black-billed, large on the Yellow-billed.
Lucky me! 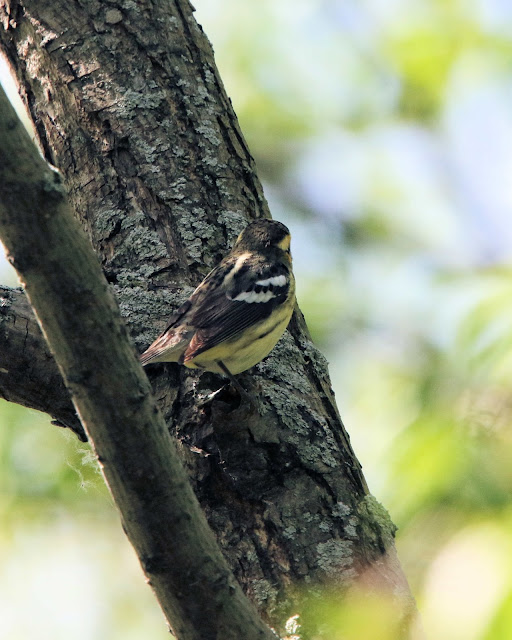 Another lucky find through the scrub!
A female Blackburnian Warbly...facing the proper direction as well! 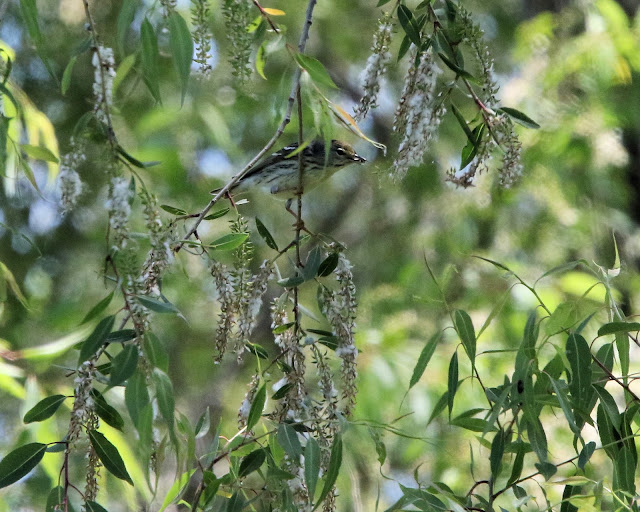 This is cropped a LOT!
I saw this female Blackpoll Warbly working in the lower branches of a tree on the other side of Crane Creek from the boardwalk.
ALWAYS check out any movement, it may not always be leaves blowing in the wind. 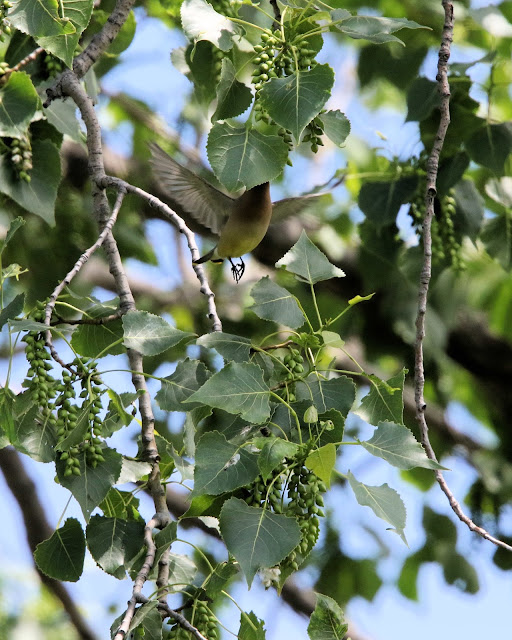 Oh! The Cedar Waxwings were NOT cooperating today! 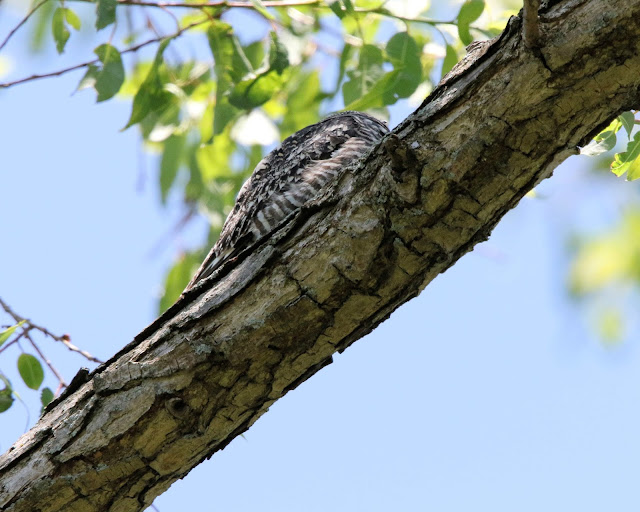 I have no idea how someone spotted this Common Nighthawk resting on this limb.
I am holding my camera directly over my head...arms shaking...to get a shot of this bird!
Thanks to the folks that were also trying to see it, I don't think I would have found it on my own. 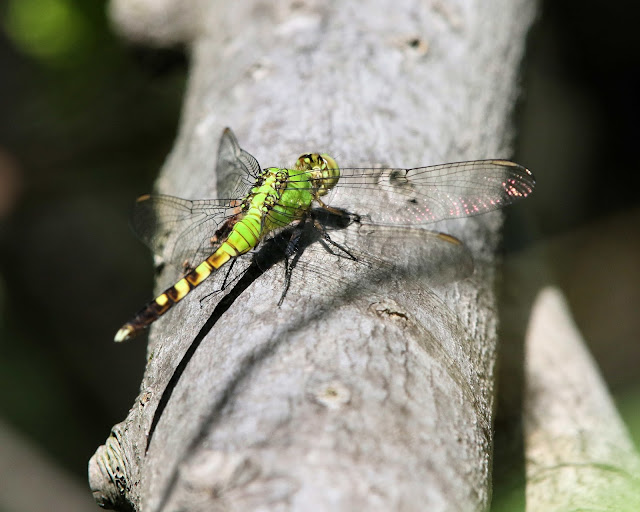 I need to practice my dragonflies again!
This is a female Eastern Pondhawk...at least I'm pretty sure it is.
One of the few that still long enough for me... 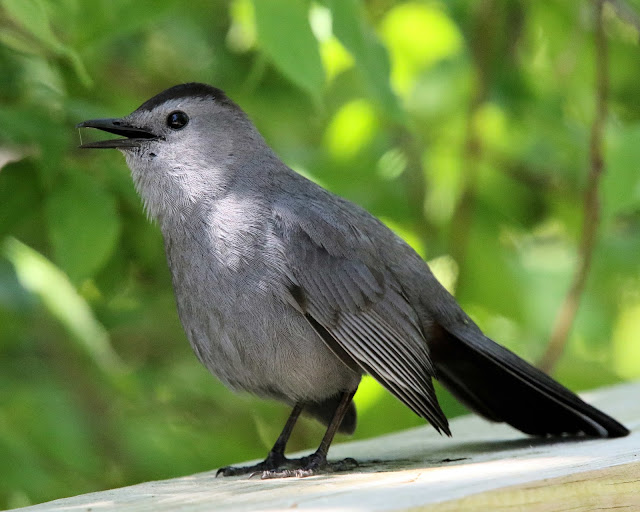 Still love those Gray Catbirds!
There's never too many for me! 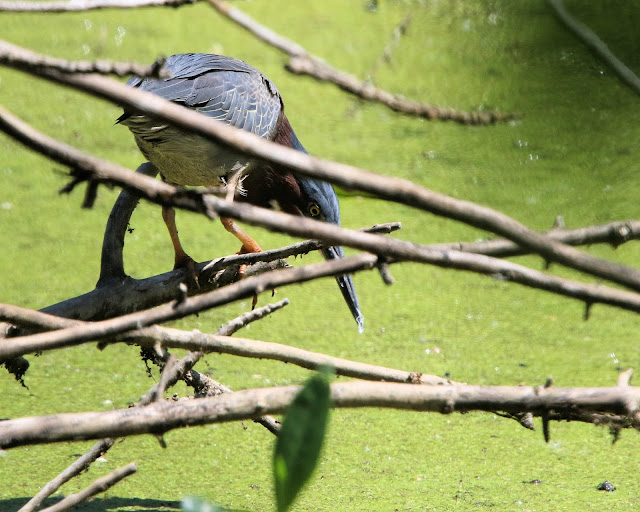 The Green Herons were making me work hard today!
Every one I saw was camouflaged amongst the branches and limbs. 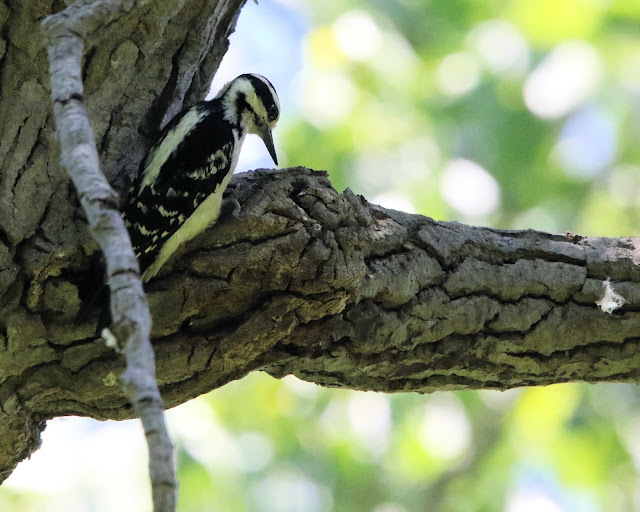 Hairy Woodpeckers are supposed to be common, but I rarely get a chance to photograph one. 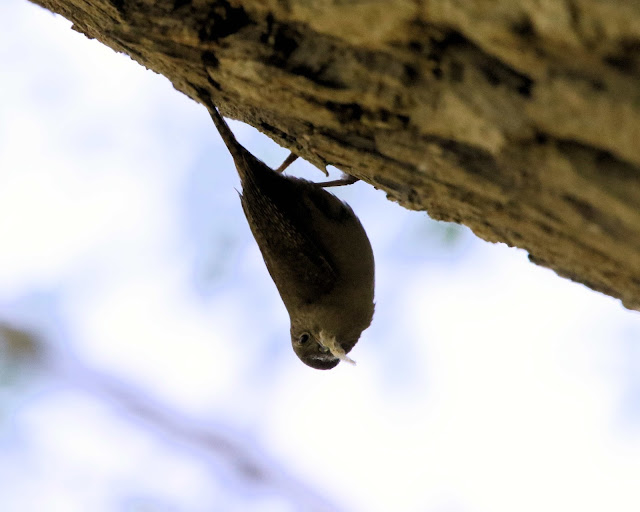 Don't flip your computer screen over!
This House Wren was walking upside down searching for goodies.
Made me dizzy just watching... 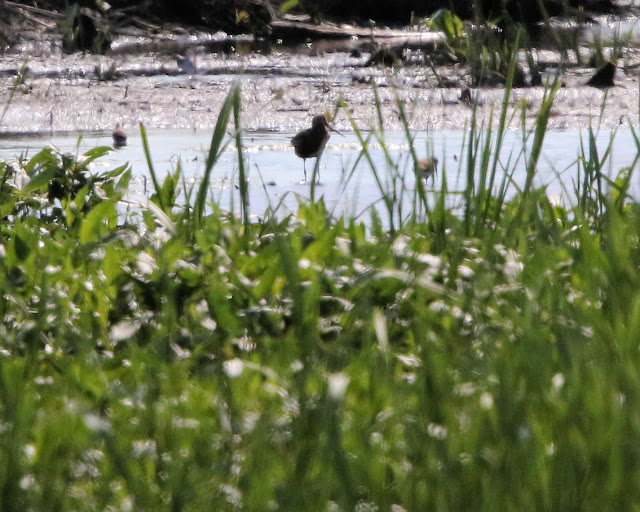 LIFER!
While hanging around Black Swamp Bird Observatory and annoying Karen, someone said there had been a Hudsonian Godwit in the marsh along the causeway.

I knew I didn't have a photos of one, so I thought I would try to locate it. I stared and stared into the marsh. I saw lots of peeps out there, but nothing that looked big enough for the Godwit. I walked down the edge of the road, careful to not get run over, and started to scan again. Up popped a large bird, bathing and preening. Without a spotting scope, I started to photograph, slowing focusing back and forth, hoping that something would be clear enough to ID through the heat waves.
I could tell that it was too dark and large to be anything other than the Hudsonian Godwit...AND I managed to get one shot from behind!

This was from a great distance and with the sun directly over head...not the best time of day for this. I was speaking with a photographer from the Detroit area that just got into birding...he was surprised how difficult it could be. I think he got on the bird, as well as a number of other that I pointed in the general direction.

When I got home I discovered it was ABA lifer  number 343! ( Yes, I have a list and obviously don't check it often!) 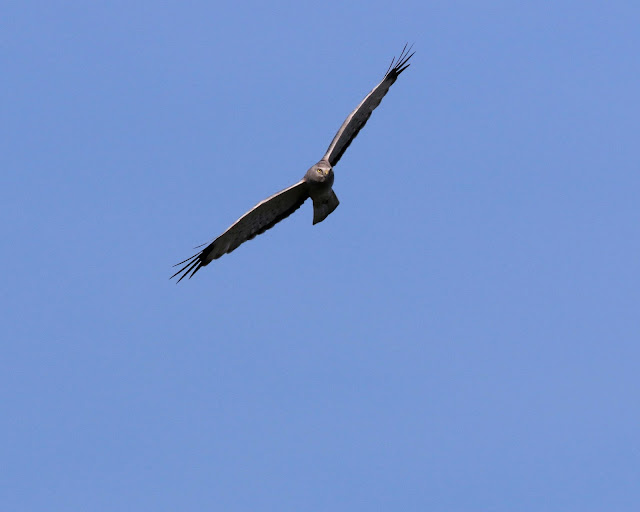 While speaking with the Detroit birder, this male Northern Harrier zipped past us then disappeared in the reeds...duck for lunch? 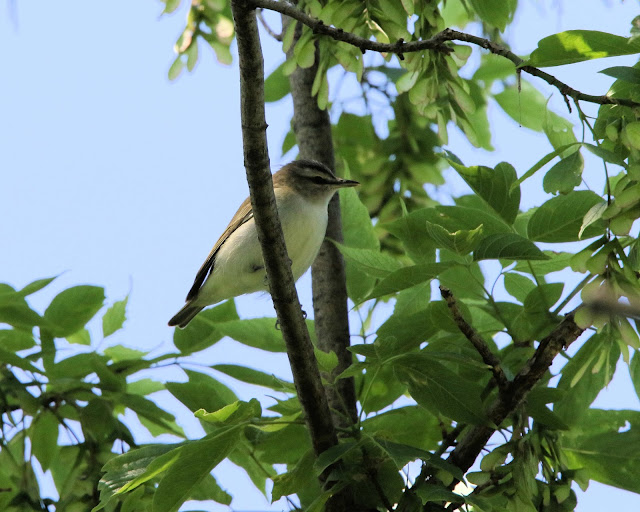 Like I said, not an easy day out there.
This Red-eyed Vireo sat for just a moment off in a distant tree. 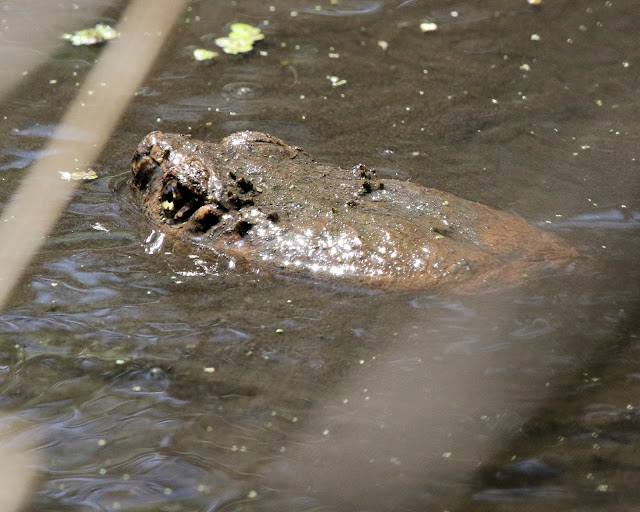 I was watching some "mud" floating down the creek and thought something looked odd.
Turned out to be a Snapping Turtle! 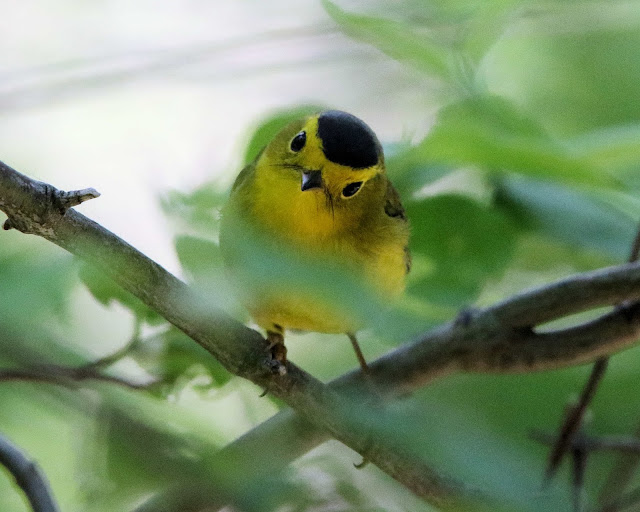 This tiny Wilson's Warbly had me walking back and forth from one side of the walk to the other, one end and back...over and over.
He would catch a few bugs, then pop out to see if I was still there and then give me the crazy eye. That went on for 10-15 minutes! I actually bumped into my friend Sally, we spoke for a bit and he was STILL there going back and forth! There must have been some mighty juicy bugs in there! 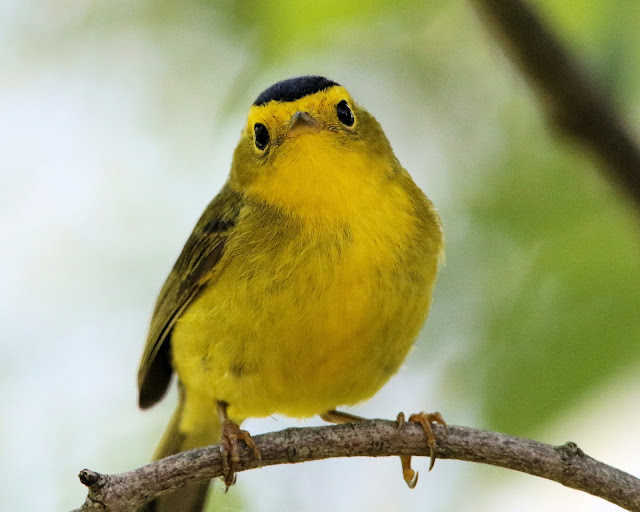 Well, that's all for today!
I'll see you soon, out there somewhere...looking closely for the interesting creatures that live around us!


It's "Wild Bird Wednesday! Check out birds from the world over at:
http://paying-ready-attention-gallery.blogspot.com/2017/06/wild-bird-wednesday-254-hooded-parrot.html
Posted by Dave at 8:29 PM